It's safe to say that carbohydrates, sugars, protein and polyunsaturated fat contents were not a big topic of conversation in the Middle Ages. But that is not stopping from Bud Light from inserting a discussion about nutrition facts labeling into its medieval-themed "Dilly Dilly" campaign.

The new ads come as the nation's largest beer brand adds a comprehensive list of ingredient labels to its packaging. One of the spots shows the labels being spread across the medieval kingdom via bow-and-arrow. Another, seen below, depicts the campaign's king character rehearsing a speech about putting the labels on every case of Bud Light.

Beer brands have historically been exempt from the kind of strict ingredient labeling requirements mandated for packaged food. Amid pressure from some health advocates, big brewers began listing calories, carbohydrates, protein, fat and alcohol-by-volume on their beers beginning in 2016 as part of a voluntary agreement led by the Beer Institute trade organization.

Heineken was among the first beers to partake, adding a box on individual bottles with the nutritional information, along with ingredients.

Bud Light is now trying to up the ante by printing a more comprehensive black-and-white "Serving Facts" label that includes a bit more information and more closely resembles the Food and Drug Administration-mandated labels for packaged foods. The extra information includes details like trans fat and added sugars, as well as ingredients, which for Bud Light are water, barley, rice and hops. Bud Light will print the information on secondary packaging, like the cardboard boxes that house 12-packs, but not on individual cans and bottles. 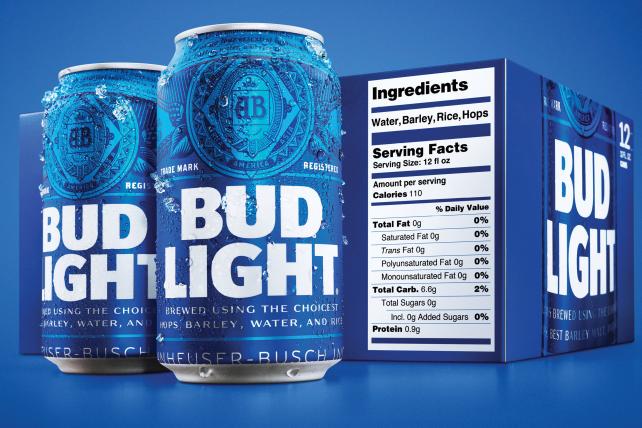 In reality, the update does not present much new information, considering that mainstream light beers are pretty simple products—consisting mostly of water, barley and hops—and are devoid of trans fat or added sugar.

But for Bud Light, that is kind of the point. By raising the profile of its basic nutritional make-up, it highlights that beer is a mostly clean product (outside of the alcohol and carbs, of course). That is a potentially positive selling point in an age when people are becoming more obsessed with what they are putting in their bodies.

"We are damn proud of the stuff we put in the beer and we want to make sure we consistently, continually tell people what goes into Bud Light," says Bud Light VP Andy Goeler. "I get excited when I look at that label. It's not only [just] four ingredients, but I love all those zeros—zero fat, zero sugar—those are things that are important to consumers."

MillerCoors is also planning to raise the profile of the ingredients in its beers—but it is stopping short of adding the same kind of serving facts panel Bud Light is using. Instead, it will soon add a QR code on the secondary packaging of its beers that takes viewers to a website called Whatsinmydrink.info, according to a spokeswoman. The site includes a link to a chart with detailed information on ingredients and nutritional content for all of its beers.

A MillerCoors spokeswoman in a statement said the brewer opted for QR codes over putting the information on the secondary packaging because it allows for "more in-depth information." She added: "We can update easily and quickly so in the future consumers can compare within the portfolio, read more about each brand's story, find out more about the brewing process, search for other beers in the portfolio and much more."

Bud Light's new ads, by agency-of-record Wieden & Kennedy New York, will air this weekend during the National Football League playoffs. The Anheuser-Busch InBev-owned brew is also developing two new ads for the Super Bowl. Goeler declined to reveal the content of those ads other than to confirm the brand is sticking with its medieval campaign.