In July Budweiser signed up to be the official beer sponsor of the National Women’s Soccer League. Now, the brand is taking the unusual step of helping the burgeoning league secure sponsors from other categories, from restaurants and condiments to deodorants and oral care.

A new campaign by VaynerMedia—called “Future Official”—debuts today, featuring a TV spot in which Megan Rapinoe urges other brands to follow Bud’s lead.

“The more support the league gets, the more the world will watch. The more the world watches, the closer we get to an equal playing field,” Rapinoe states in the ad, making reference to gender equality, which has become a rallying cry for women’s soccer stars trying to bridge the financial gap with men’s soccer.

The gap is apparent in the sponsor roster for the NWSL and the top U.S. men’s pro league, Major League Soccer. The MLS lists 24 official sponsors on its web site, including major marketers like Coca-Cola, AT&T, Target, Heineken and Kellogg’s. The NWSL, meantime, only lists five sponsors: Budweiser, Nike, the Lifetime cable network, insect repellent brand Cutter and Thorne, a health and technology company whose products include dietary supplements.

Budweiser's campaign essentially uses a chunk of Anheuser-Busch’s vast marketing budget to rally corporate support for the league. Of course, the move is clearly also aimed at more closely linking Bud to a league that has become a symbol for gender equality.

The campaign asks for consumers to pre-pledge support for whatever brands fill sponsor gaps across several categories. This occurs at a special website where fans are asked to put in their names and email addresses, promising to support, for instance, whatever eyewear brand signs on as a sponsor. It includes a mechanism that allows fans to target specific brands by tagging them on social media.

The TV ad will run during ESPN’s Sunday broadcast of the NWSL championship game matchup between the Chicago Red Stars and North Carolina Courage. The media plan also includes newspaper ads in the Charlotte Observer and Seattle Times, such as one showing a picture of Rapinoe and “the future official deodorant of the NWSL.” 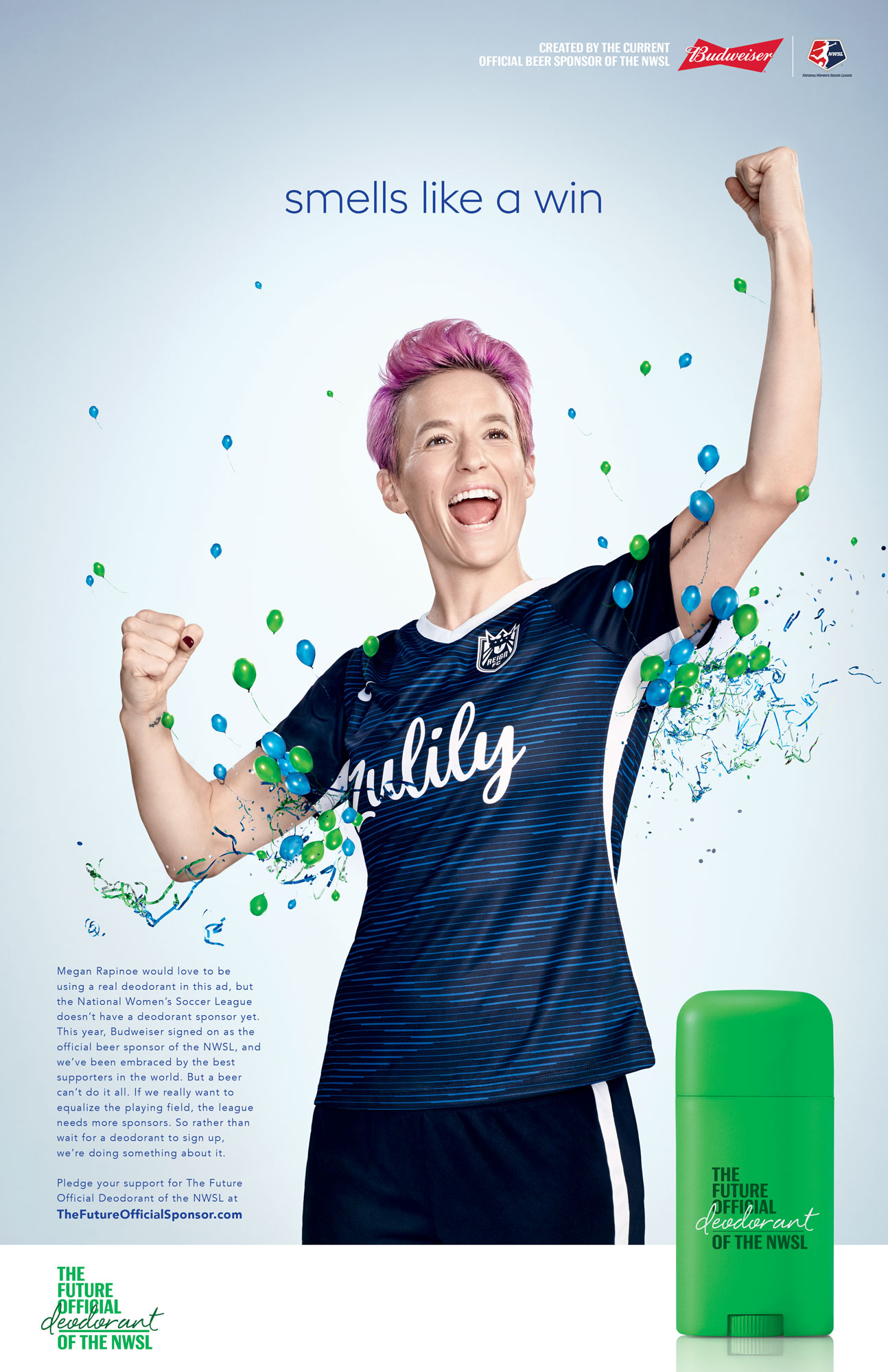 Budweiser signed on in the wake of the Women’s World Cup, which, thanks to stars like Rapinoe, vaulted the popularity of women’s soccer. But the trick for the sport has always been to continue the momentum after the event, which only occurs every four years. Bud fed into that theme with an ad in July called “We Won’t Stop Watching,” narrated by Brandi Chastain, that pled with fans to continue their support after the World Cup.

The league, according to attendance numbers, has been able to maintain some of the World Cup momentum. As of Oct. 12, per-match attendance had risen 22 percent from the 2018 season, according to Soccer Stadium Digest. Team average attendance ranged from a high of 20,098 for the Portland franchise to a low of 3,338 for the Piscataway Township, New Jersey club.

“When the USWNT returned from France, the next step was making sure fans continued to support women’s soccer on a year-round basis. And they answered our rally cry by supporting the NWSL with both record attendance and viewership this year,” Monica Rustgi, VP of marketing for Budweiser, said in a statement. “Now, with the ‘Future Official Sponsor’ campaign, we turn to other brands and encourage them to support the league like passionate fans.”

Bud’s campaign comes after the league earlier this week announced a new deal with Octagon, a sports and entertainment agency owned by Interpublic. The “multi-tier consulting partnership” makes Octagon the NWSL’s advisor on media rights, sponsorship and marketing.