Burger King is out with a fresh spin on its 1969 logo that gives the No. 2 burger chain a look that’s more fitting for today’s digital screens, packaging, uniforms and even its drive-thru lanes, giving the Home of the Whopper a decidedly 2021 overhaul.

The updated design, which the chain worked on with Jones Knowles Ritchie (JKR), has begun to appear on Burger King’s app and at newly opened restaurants. It comes after the Restaurant Brands International chain overhauled its ingredients, removing artificial colors, flavors and preservatives, and put more emphasis on sustainability efforts. 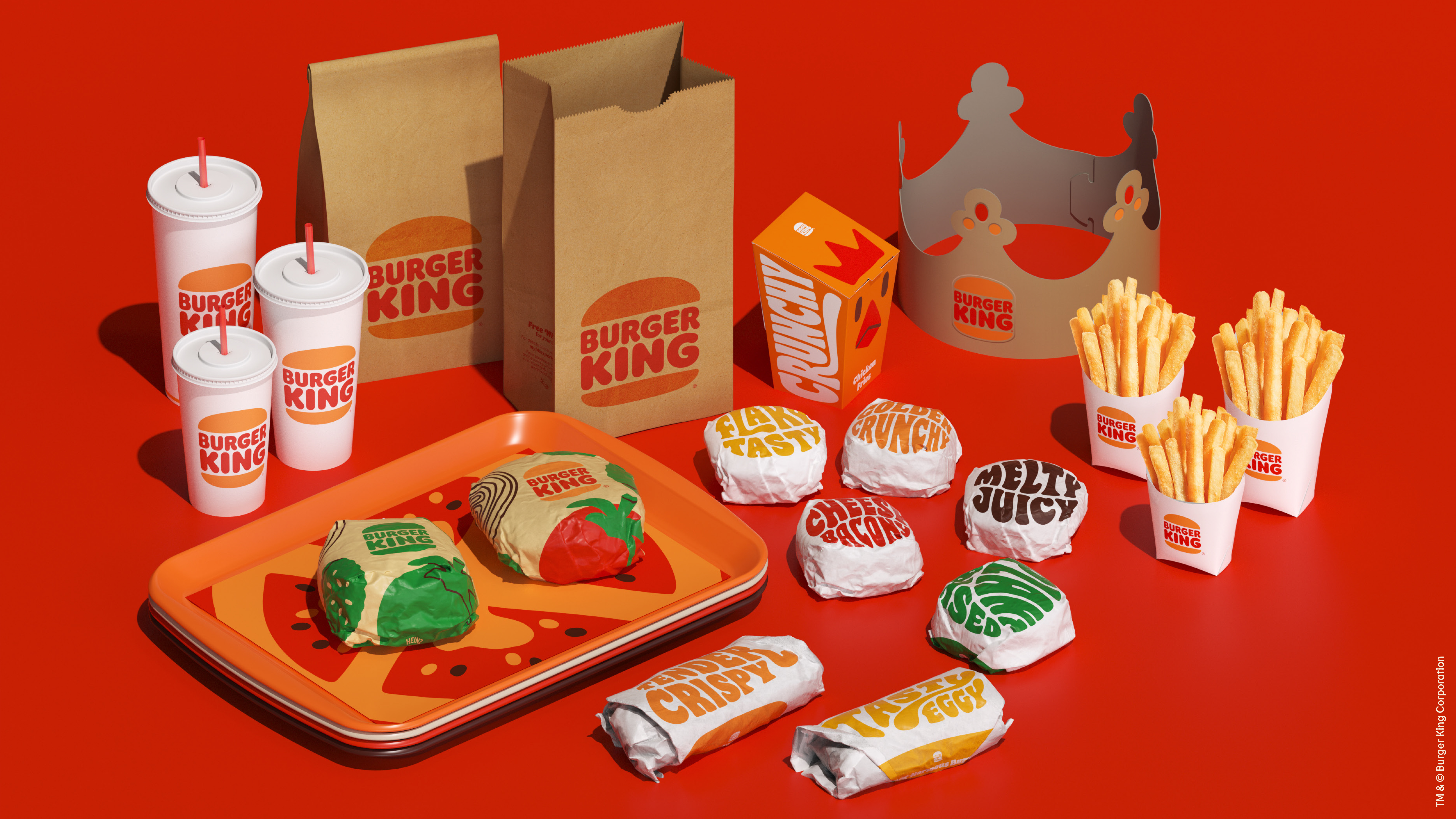 Burger King is revealing its redesign “almost as a wrapping of all of these other initiatives,” Restaurant Brands International Global Chief Marketing Officer Fernando Machado said in an interview, speaking from a remodeled Burger King in Miami as he wore one of the chain’s new shirts. “It modernized the brand but also makes the brand even more classic.”

The project, in the works for about two years, updates the logo introduced in 1969 and first updated in 1994 which shows the words Burger King written in red lettering nestled in a bun. Starting in 1999, Burger King began using a more circular design with a blue outline that has a bit of a "swoosh" feel. That design from Sterling Brands felt appropriate in the late 1990s and early 2000s but it doesn’t work as well online. A cleaner, simplified look is what brands need for visual cues on mobile phones and in cluttered social media feeds. 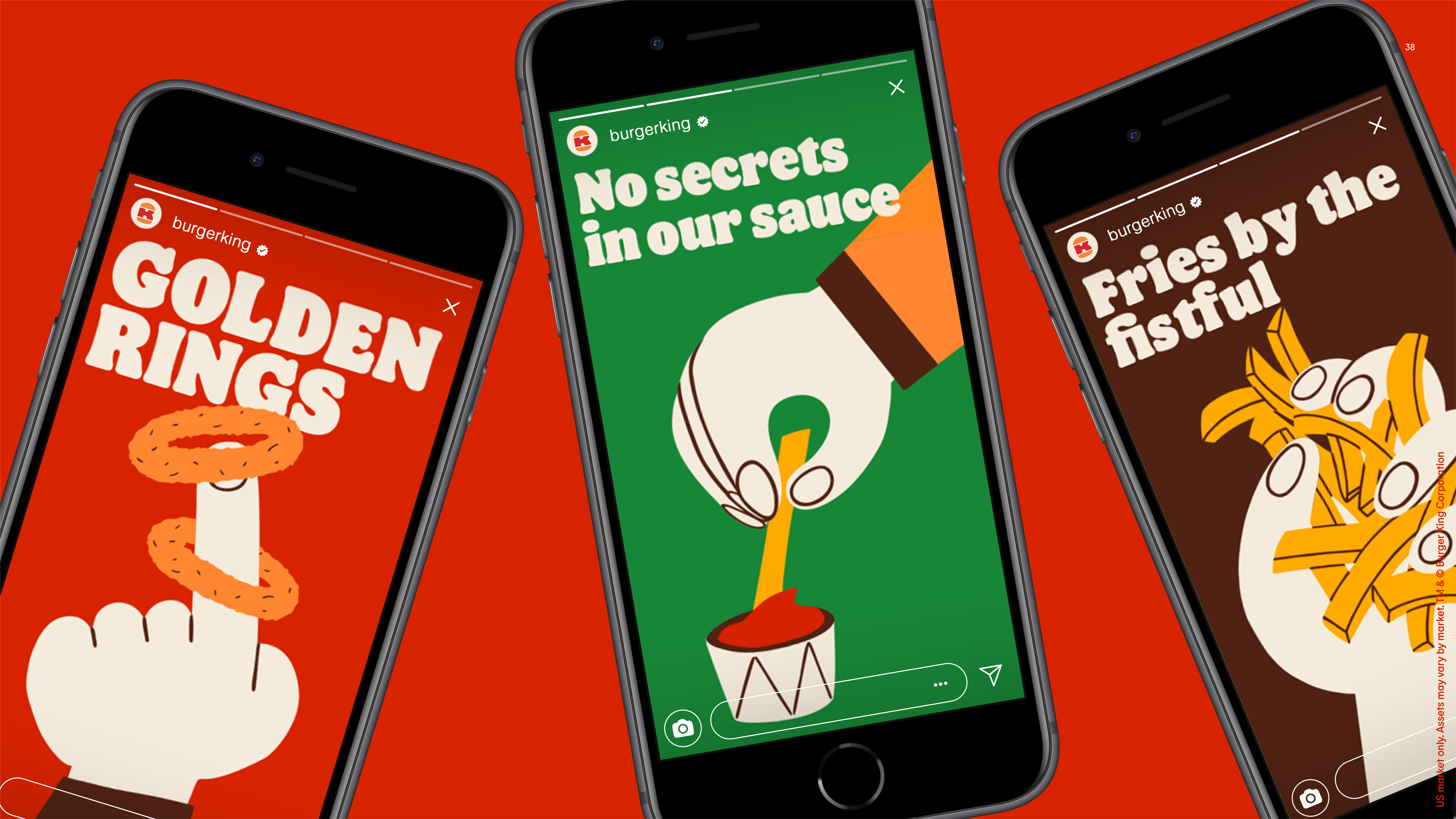 Burger King’s new look is flat, with fewer colors and elements. “The playground for brands is in the digital space,” says Raphael Abreu, Restaurant Brands International head of design.

The modernized take on the classic logo for the chain founded in 1954 feels more authentic.

“We are very proud of that that we found in our own history our path forward,” Abreu says as he stands next to Machado in a brown Burger King tracksuit style uniform. (The color, by the way, even has a name: BBQ Brown.) “I think it’s a much better portrayal of who we are as a brand.”

A new font, dubbed Flame, was designed for stills and movement. The lettering has no sharp edges and can stretch to showcase words such as melty and juicy on sandwich wrappers, for example, and conveys movement in animation. Burger King is also using a new photography style in its marketing materials that shows more texture of the food. 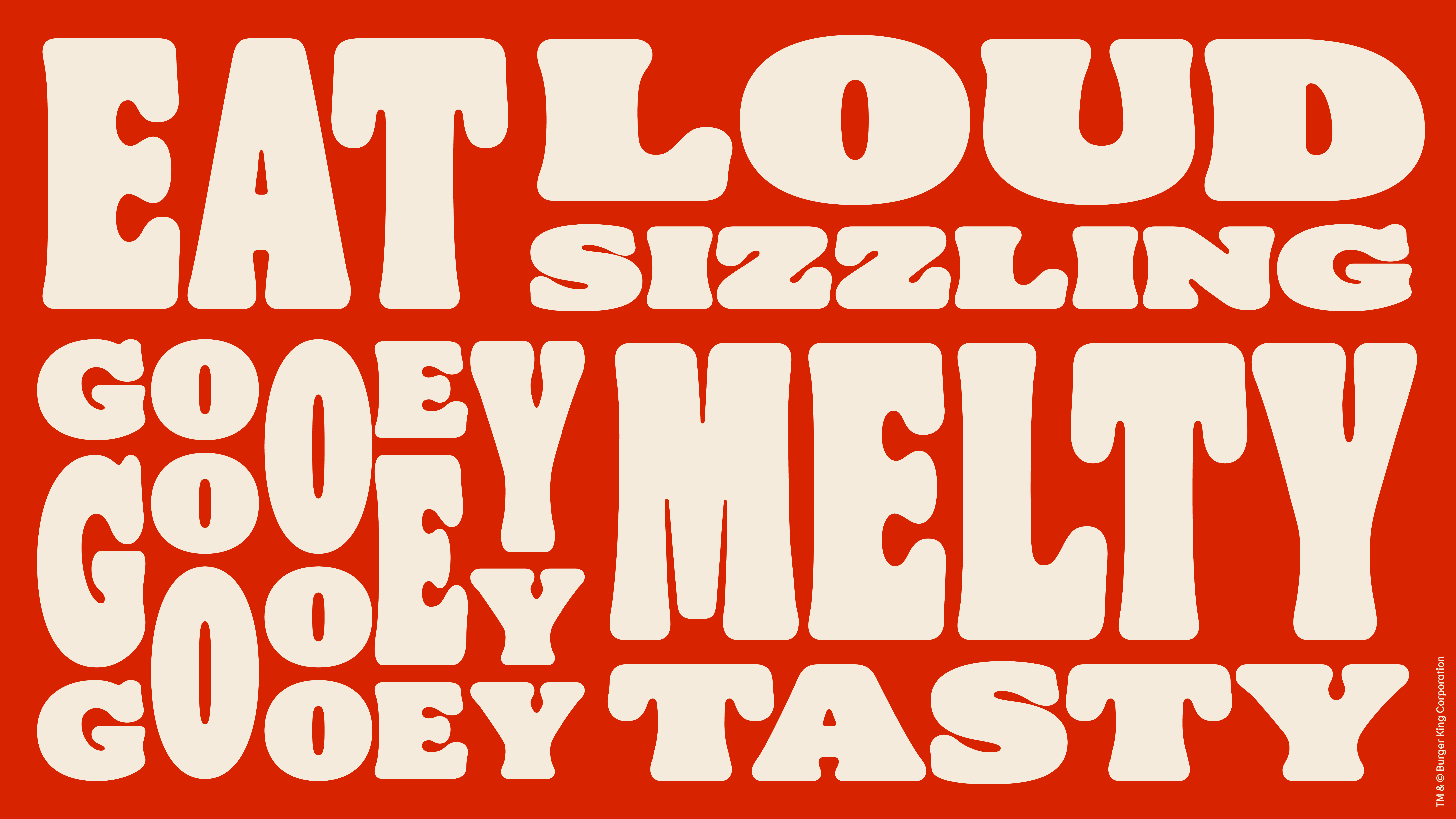 And the blue from the 1999 logo is being retired. Blue “is not so appetizing,” says Machado, who wasn’t working on the brand when it was introduced.

Burger King won’t issue advertising solely focused on the new look, says Machado. And, he adds, Burger King doesn’t have any plans to run a Super Bowl spot in 2021. In 2019, it featured a 1980s video of Andy Warhol having a Whopper, and the logo on the bag in that commercial is similar to the one being introduced.

The new look won’t replace the old one everywhere overnight. It will be rolled in as franchisees order new packaging and uniforms and remodel their locations. Burger King has more than 18,800 locations, most of them franchised, across more than 100 countries. It isn’t offering operators any incentives to update their designs, says Machado. There are incentives in the U.S., however, to add double drive-thrus and install outdoor digital menu boards, which would showcase the new look. Some locations are putting stripes of the colors on the ground in the drive-thru lane. One design even shows the chain’s King mascot painted on the ground in a designated pickup parking spot. 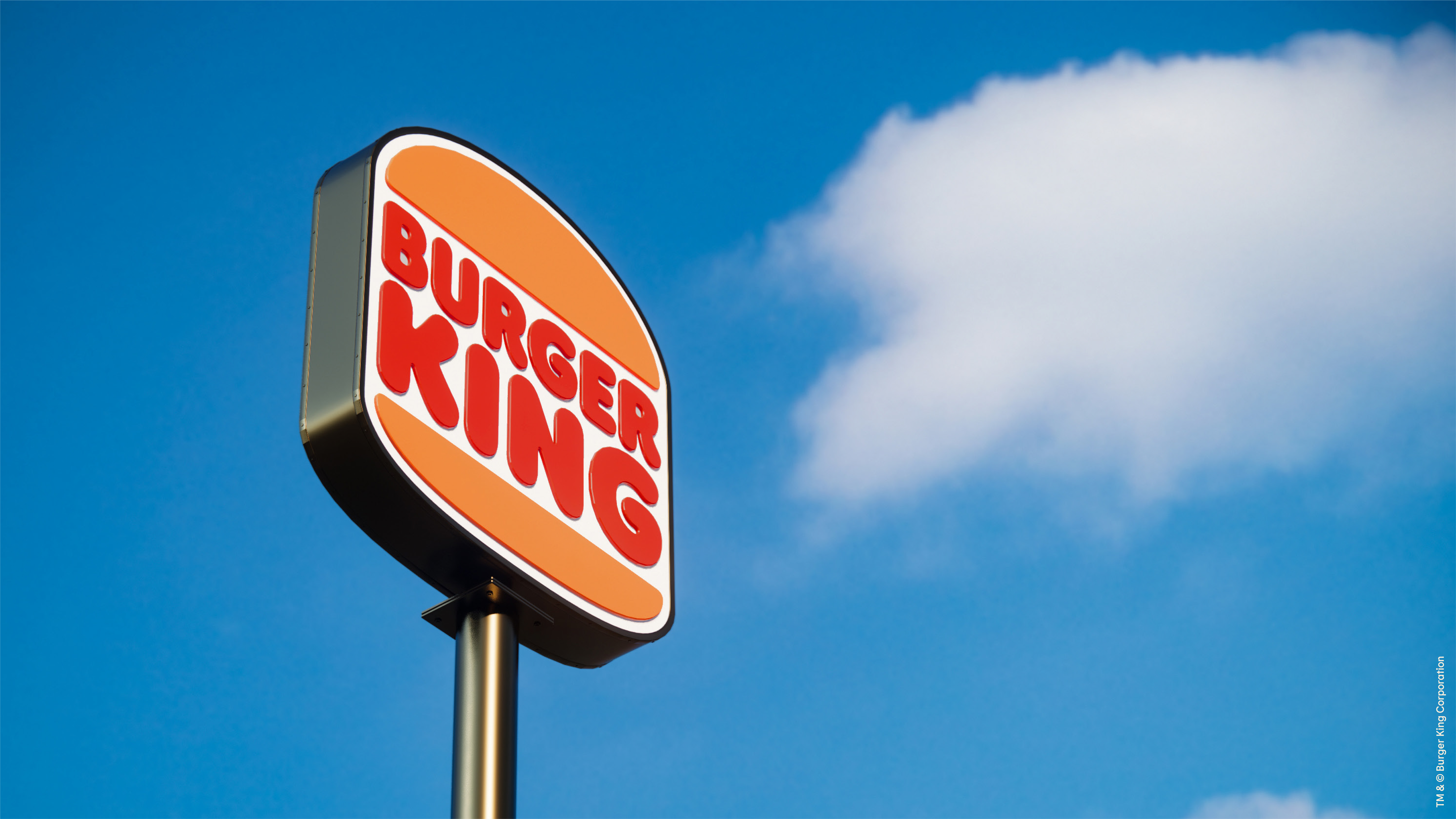 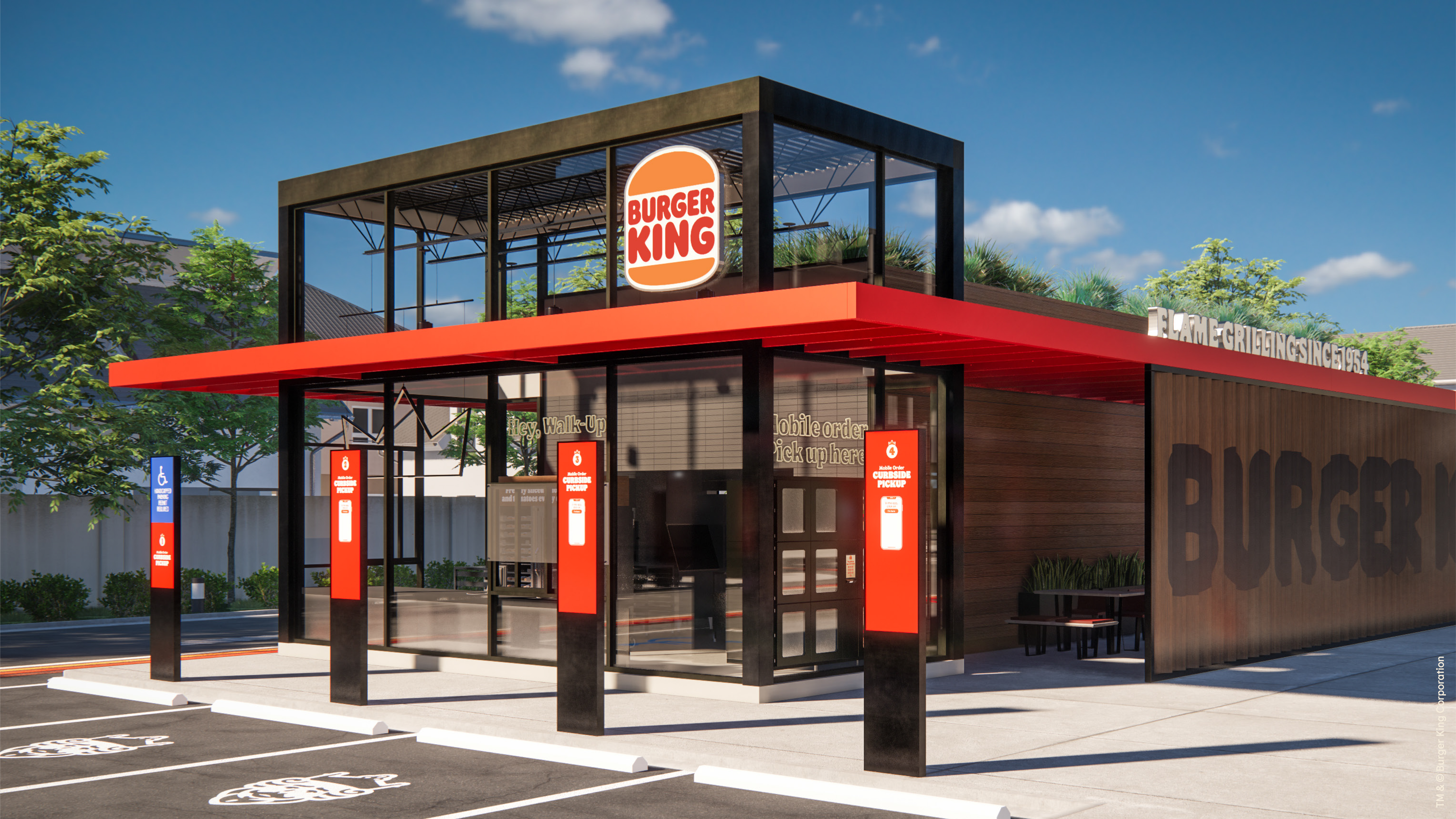 Drive-thru lanes and the chain’s mobile app have taken on more importance during the coronavirus pandemic. Burger King, like other fast feeders, has been investing in technology, such as outdoor digital menu boards with predictive selling, and beefing up delivery.

Such moves are “certain bets,” says Machado. Burger King’s systemwide and comparable sales fell in the first nine months of 2020.

JKR worked with fashion designer Bryce Barnes on the uniforms. Others that worked on the project include Colophon Foundry on type design and Cachetejack on illustration. 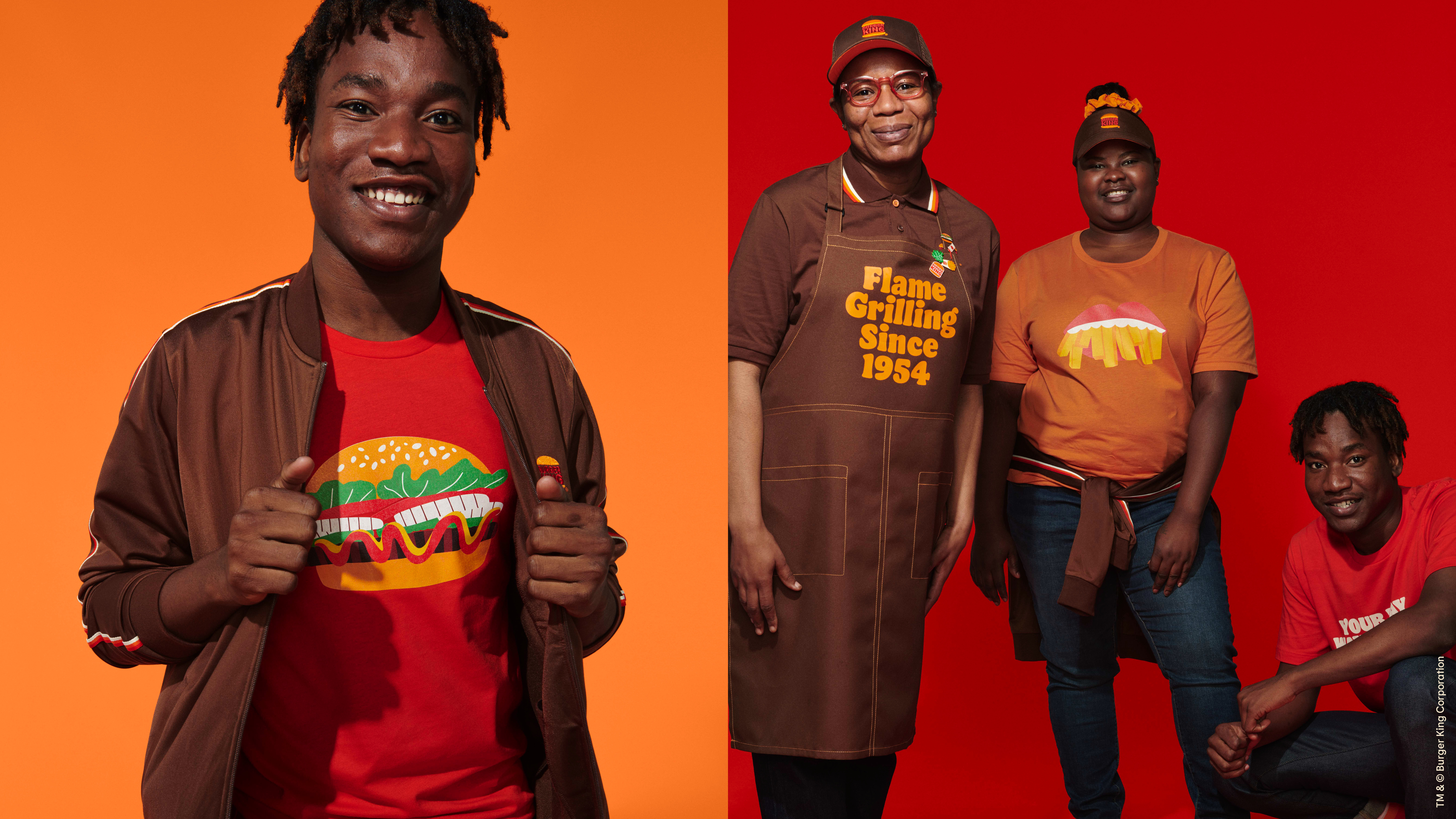 Burger King joins a growing list of brand overhauls introduced to kick off 2021 including Kia, the CIA and Pfizer.

Burger King is the second-largest burger chain behind McDonald’s, which rolled out its updated visual identity in 2019 after overhauling its packaging designs in 2016.

Head of Strategy :
Gavin May

Burger King: Burger King keeps you guessing in this spot that mentions all its rivals