Produced out of Alldayeveryday, the nearly 20-minute long film also stars Mr. Pitt along with a pair of his former co-stars, Astrid Berges-Frisbey (I Origins) and Stephen Graham (Boardwalk Empire). Mr. Pitt plays a stone-faced but hopeful driver who contemplates what it will take for him to make it big in the world as he chauffeurs a mobster-type (Graham) and his girlfriend (Berges-Frisbey) to a club. There, Graham meets up in a back room to make an important "transaction" with some affiliates, but things go awry.

Rag & Bone products from both the men's and women's lines (clothes, shoes, accessories) make subtle appearances throughout, but the thing that really shines is the story. The film also features music by Mr. Pitt, as well as a voiceover by Gary Oldman.

"As a brand, we love to explore engaging mediums of showcasing our collections and this season we wanted to try a different approach with a film-led campaign," explained Rag & Bone partner Marcus Wainwright. "We thought it would be cool to have a narrative of sorts for the first time."

"We have never explored shooting our menswear and womenswear campaign together before and it definitely added a new dimension," added partner David Neville. "Michael and Astrid also have great chemistry, which really translates."

Fashion campaigns indeed are getting more entertaining and ambitious. Check out Autumne de Wilde's recent campaign for Prada, for example, or even Gap's campaign directed by David Fincher.

"Fashion films are evolving and embracing narrative," said Alldayeveryday Executive Producer Arrow Kruse. "The brands leading the way are able to reach new customers by focusing on the overall experience over a product-is-hero approach. The Rag & Bone campaign is a great example of how lifestyle and product incorporated subtly into a story can create desire or brand identification with an audience." 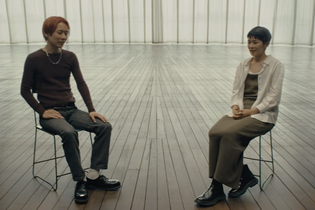