Ted Baker : Keeping Up With the Bakers (Brand Film)

The "Keeping Up With the Bakers" campaign centers on a family in the fictional suburban neighborhood of "Tailor's Lane," where envious neighbors are fixated on the stylish Baker family (think "The Brady Bunch" meets Wisteria Lane.) The 360-degree film is playfully directed in pastel colors by Iconoclast's Crowns & Owls (who helmed Ted Baker's autumn/winter fashion film, Mission Impossible) and adds fun graphics to the footage that will appeal to fans of Snapchat.

Viewers can click straight on the clothes in the film to buy individual items or a whole outfit, as well as being invited to poke around the Baker family home and reveal hidden content (see a demo of the interactive features here.)

The film will be hosted on TedBaker.com, plus on Ted Baker's U.K. and U.S. partner sites, ASOS.com and Nordstrom.com respectively. It'll also be available to view through Google Cardboard for a more immersive VR experience.

To complement the film, Publicis digital agency Poke has created a virtual neighborhood within Ted Baker's Instagram channel. Followers are invited to become a Tailor's Lane nosy neighbor by completing daily challenges, and new content and details of winners will be revealed on Instagram Stories.

Ted Baker also worked with Nexus Studios' Interactive Arts Division to create interactive store windows, enabling passers-by to spy into the Bakers' living room. Placing their hands on the glass triggers a camera that puts the user within the window itself and takes a photo of them as one of the characters. 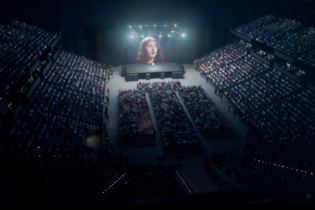