Ahead of Ad Age's 10th Annual Small Agency Conference in New Orleans July 30-31, we are highlighting standout work from the industry's tiny but mighty creative players. Here’s a look at work from San Francisco-based Even/Odd, a hybrid creative studio and production shop of six full-timers plus a small research arm that scale up per the unique requirements of each project. The company was behind the moving “For Every Kind of Dream” short film series for Square, which earned the Tribeca Film Festival’s Tribeca X award and recently teamed up with Lyft on another content-driven effort celebrating the diversity of the platform’s drivers.

While anti-immigrant sentiment rages on in the U.S. and abroad, ridesharing platform Lyft teamed up with San Francisco-based small shop Even/Odd to bring immigrants’ voices to the fore in a new campaign and digital platform dedicated to telling their stories.

“America is an Idea, Not a Geography” combines film, photography and text to convey the richness of immigrant culture in the U.S. The site says in its introduction, “Many of our drivers are immigrants, and many more are from immigrant families--all living in a nation founded by immigrants.”

From there, visitors can dive into the various Lyft drivers’ stories—you’ll see the obstacles they’ve encountered because of their backgrounds, but you’ll also learn about the colorful, diverse contributions they’ve made to the broader community. You'll also see how they are, well, just like everyone else.

There’s a man named Wilson, aka Punch, who was born in Los Angeles to Salvadoran parents. Having lost loved ones to gang violence, he didn’t think he’d make it past the age of 21. But today, he’s a father of three, drives for Lyft and has a passion for building lowriders.

There’s also Zahraa, a Muslim first-generation Lebanese single mom of three based in Los Angeles, who has experienced both hate and admiration from others because of her background. The campaign also looks into the Somali diaspora of Minnesota—home to U.S. representative Ilhan Omar, one of the politicians targeted by President Trump’s “go back” Twitter attack. Featuring words from Safy-Hallan Farrah, founder of Somali culture zine “1991,” and films highlighting various generations of Somali-Americans, the effort seeks to portray the multi-dimensionality—including the “regular-ness” of the community.

According to Mohammad Gorjestani, director and co-founder of Even/Odd, “We wanted to treat immigration not as an issue in America, but rather as the defining culture of America. We wanted to show an authentic picture of immigrant culture that celebrates the resilience and extraordinary qualities of these communities—rather than the more common, kneejerk narratives of victimization, powerlessness, or reducing the immigrant experience to an anecdote of a political controversy.”

While the subjects are immigrants, so is much of the creative team behind it. According to Gorjestani, the creators’ own backgrounds as immigrants or first-generation Americans helped to inform the project.

Gorjestani himself immigrated to the U.S. from Iran, after the Iranian revolution, during the Iran/Iraq war. “By having creators who were able to relate to the subject matter personally, including some who have a personal stake in the outcome of some proposed policies, it gave the work a certain nuance, tenacity and sensitivity,” he says.

Although mainstream media and advertising diversity and representation has become more common, "stories from immigrant or minority communities end up fairly one-note and formulaic," Gorjestani says. "But when you have people on your team who have a stake in the topic, it becomes more than just a timely exercise--the work is driven by a deep-seated purpose.”

Unlike those “formulaic” ideas, Gorjestani believes the campaign communicates something crucial: “immigrants don’t need hugs, they need to be seen, respected and fully represented.”

As part of the effort, Lyft is also supporting the Refugee and Immigrant Center for Education and Legal Services (RAICES). Those who use Lyft have the opportunity to round up their bill to help fund the organization. The individual stories in the platform also invite visitors to donate to non-profits tied to each of the subjects. Lyft will also donate $150,000 in ride credits to those organizations.

“Lyft is a brand with strong values that we uphold within our own walls and that shape the public perception of our company,” says Lyft Associate Creative Director Joey Manin. “We wanted to lean into our values and partner with organizations that share a collective drive to make this a more inclusive place.”

As part of the campaign Lyft will promote the films in the New York Times Magazine's recent issue themed around immigrants. 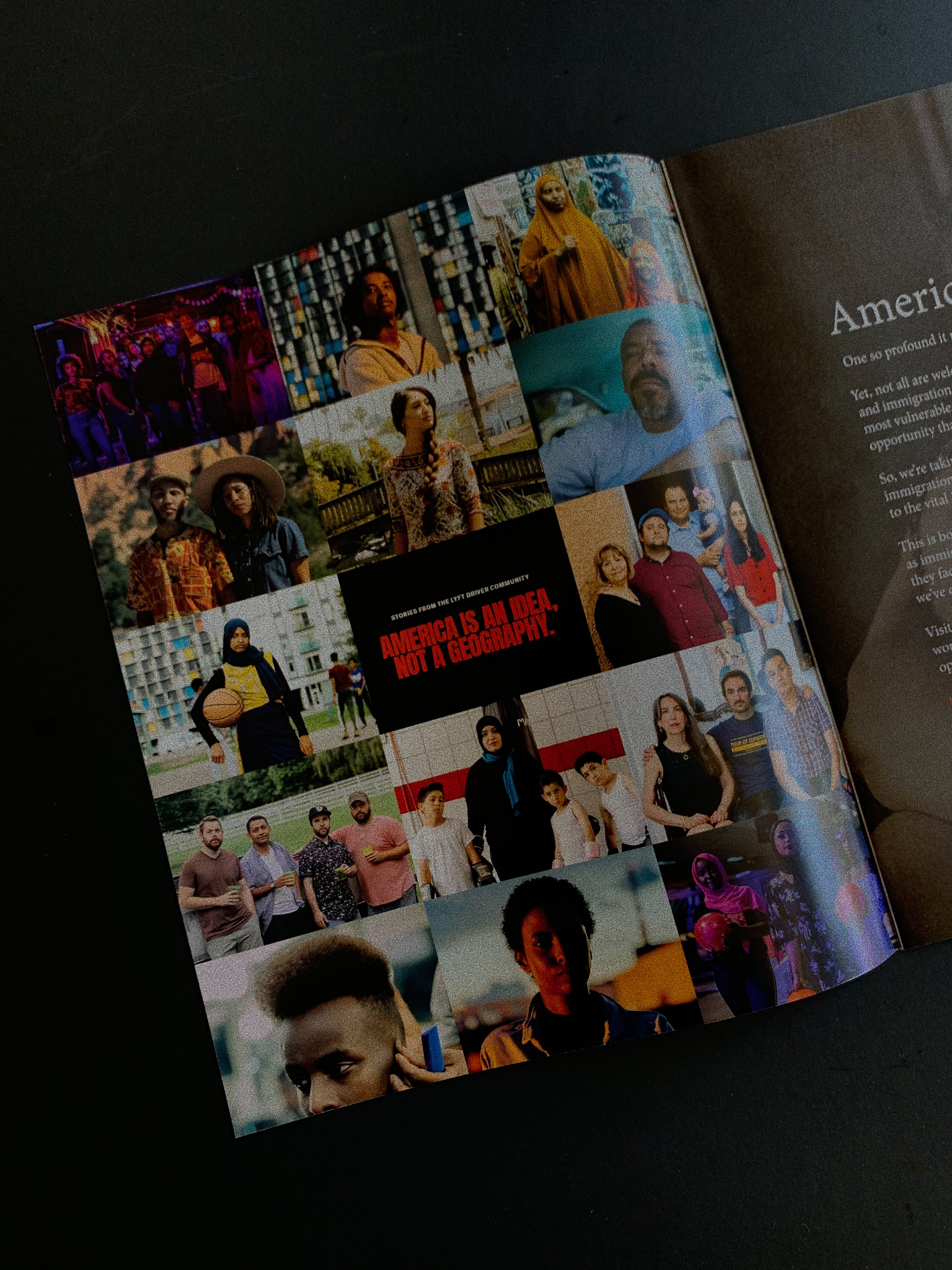 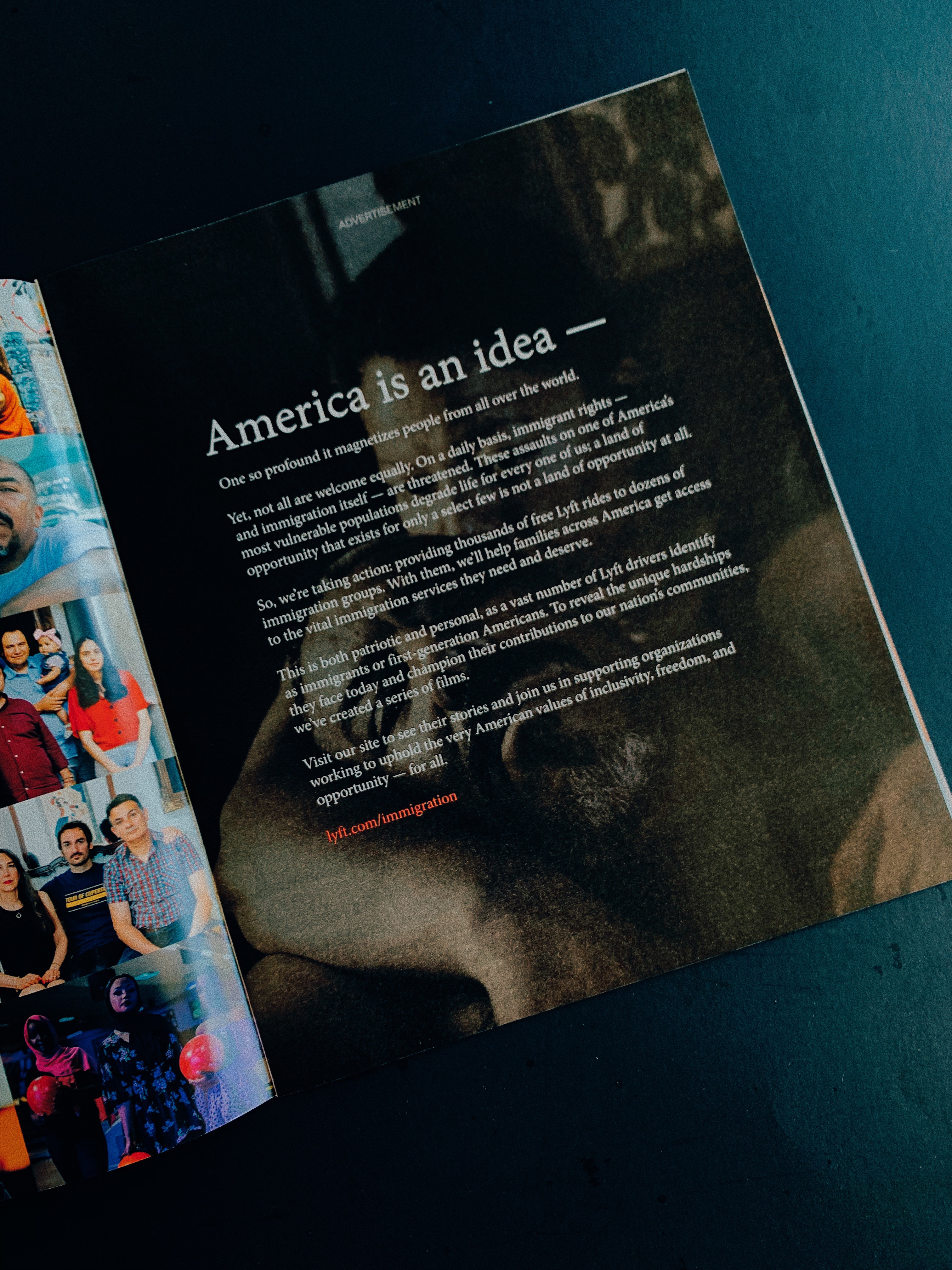 Lyft: Lyft’s brand campaign is all about the passenger life

Lyft: On St. Paddy's Day, Lyft Riders May Be in for a 'Lucky' Surprise

Lyft: Lyft Debuts Its Own Beer--Complete With Discount Code for Future Riders