Self-love is the message behind Match’s suggestive new campaign

Match has been helping its users make romantic connections for more than 25 years, but starting this week, its unveiling a new ad campaign to drive home the message that it’s better to focus on yourself than to focus on a sub-par significant other.

Titled “Do You. Until You Find Someone Worth Doing,” the cheeky new marketing push is the brand’s quite literal declaration that “there’s no greater or more important love than self-love,” said Amber Harrison, VP of brand for Match.

Running across social, digital and out-of-home channels, the campaign was created by Mojo Supermarket and shot by filmmaker and photographer Matt Lambert, who’s especially known for his work highlighting intimacy in LGBTQ+ communities.

It is centered on “tasteful yet compelling images of self-pleasure,” Match said in a statement, with each ad being accompanied by a cutesy tagline such as “If all they talk about is crypto, invest in yourself” and “Because we know you care about what you put in your body.”

Its out-of-home placements in a number of U.S. cities will also have some area-specific lingo; in Brooklyn, for example, some billboards will read “Williamsburg has enough bars, why lower yours?” 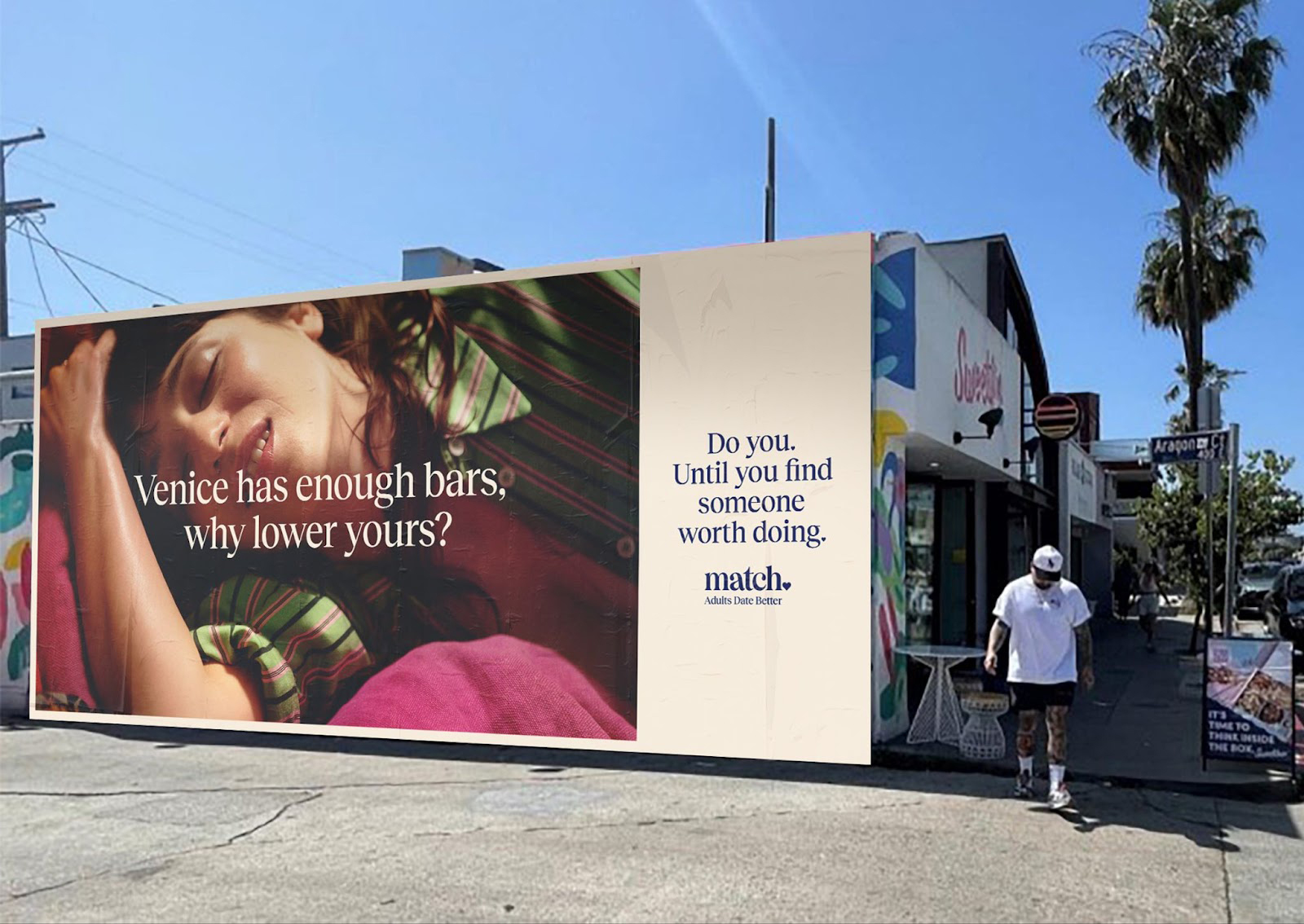 The impetus behind Match’s new campaign seems to be much the opposite of last year’s “hot vax summer” trend, which saw many love industry marketers including Match gear up to cash in on a wave of pent-up lust that was expected to follow the easing of COVID-19 restrictions in mid-2021.

Now, instead of making up for lost time and having a fling with the first dating app connection you make, Match is embracing romance with a more calculated approach, encouraging the American public to not lower their standards or rush their search to find a partner.

“The conversation around dating has shifted massively recently. We’re seeing people finally stand up against the societal pressure of settling to settle down,” ​​said Kate Carter, group creative director at Mojo Supermarket, which was recently named Ad Age’s 2022 Small Agency of the Year. 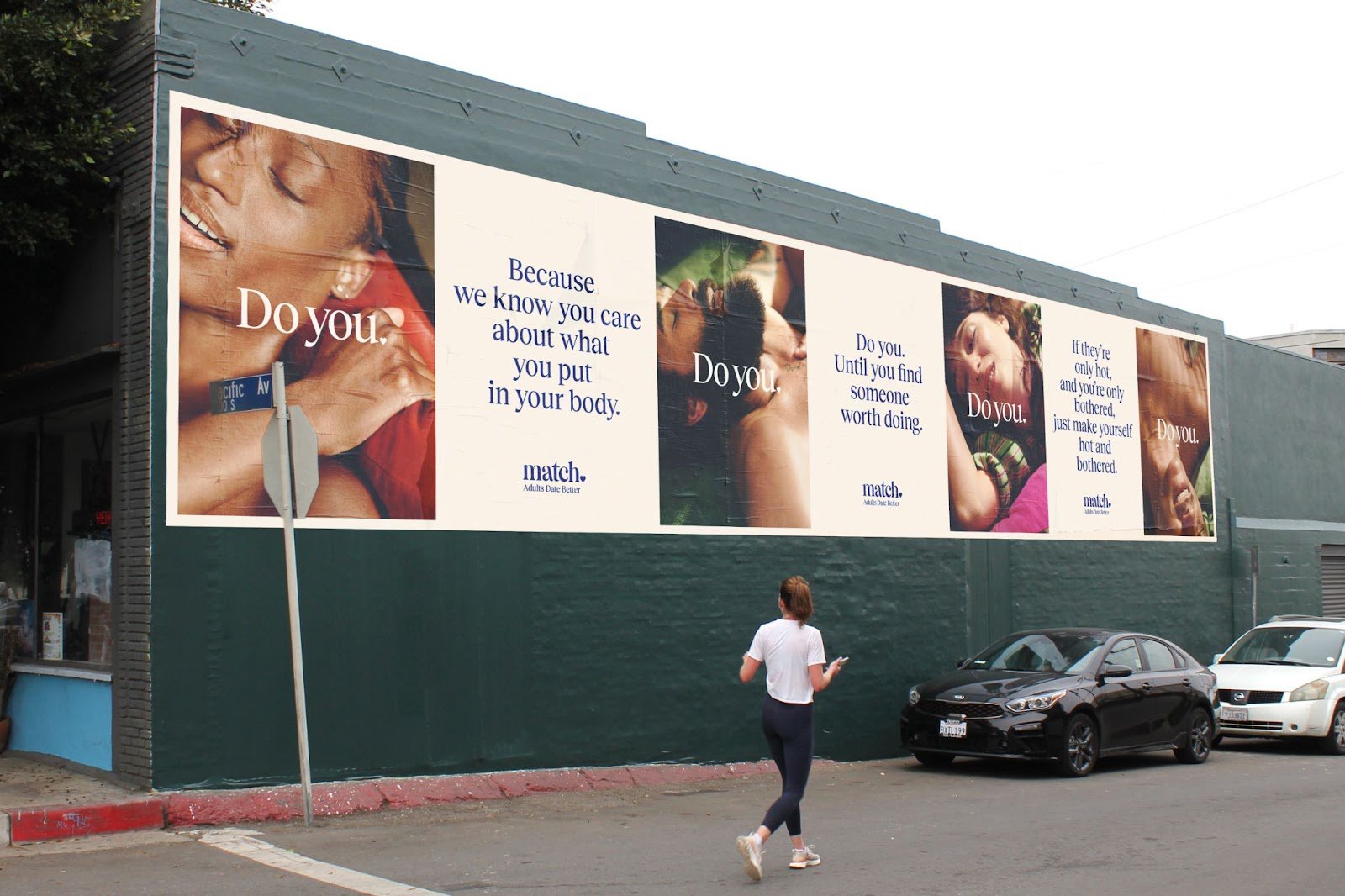 “It’s a conversation that can’t and shouldn’t be ignored,” she said, suggesting that the New York-based agency’s “Do You. Until You Find Someone Worth Doing” campaign for Match shows that the company is also “the first dating platform to not only listen to the needs of its members, but celebrate it.”

Timed to the campaign, Match is rolling out a feature on its app that will let users fill out new trending topics describing how they “do you.” The company has also tapped pop singer Ariana and the Rose to create an original piece of audio for the campaign’s influencer extension, in which online personalities “will share their personal anecdotes on ‘doing you’ and encourage their communities to do the same” on TikTok and Instagram, Match said.

It has also announced that its users will be able to receive a month’s worth of free therapy via online mental health platform BetterHelp in a bid to further its emphasis on personal wellbeing.

The new self-love push comes on the heels of Match’s “Adults Date Better” campaign, which it debuted last year with Mojo Supermarket’s help to position the platform as one for daters with emotional maturity, rather than those just looking for a one-night-stand.

Mojo has handled the dating brand’s advertising needs since it won Match’s business in April 2021 after a months-long review.