Storm Smith on amplifying the voice of the Black Deaf community in the wake of the deaths of George Floyd, Breonna Taylor and others | Ad Age
Skip to main content
CREATIVITY
Sign In Register

Storm Smith on amplifying the voice of the Black Deaf community in the wake of the deaths of George Floyd, Breonna Taylor and others

Her short film 'Am I Next,' created with Natasha Ofili, is a silent tale that speaks volumes

For Black History Month, Ad Age is turning to industry leaders to help share stories of creative excellence and inspiration across the spectrum of talents in advertising and marketing. Each week, a top exec will serve as guest editor and share a project that represented a pivotal moments for them as a creator. Each day thereafter, a talent they nominate will share work of their own.

As this week's Guest Editor, we have Storm Smith, the first Deaf woman to have been recruited by BBDO Worldwide, where she currently serves as a producer in the agency's Los Angeles office. She also serves as creative director on a number of collaborative projects—she has worked as an Amazon Studios consultant on its original film "Sound of Metal" and has teamed up on social projects with Hollywood talents including Natasha Ofili, Oscar winner Marlee Matlin, Tony nominee Lauren Ridloff and social influencer Crissa Jackson. Smith has also earned recognition for her ongoing efforts to promote diversity, inclusion abnd accessibility, including recognition from President Barack Obama for the 30th anniversary of the Americans with Disabilities Act and ADCOLOR's Unsung Community Hero award.

Here, she opens up about the mantra that drives her creatively and shares an important short film that she made to amplify the voice of the Black Deaf community in the wake of deaths of George Floyd, Breonna Taylor and the many others who have fallen victim to police brutality. 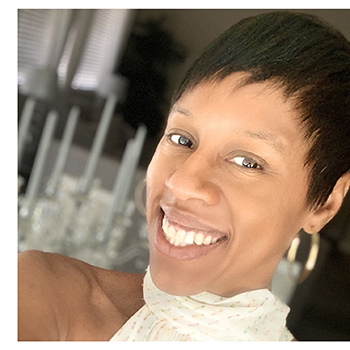 In 2016, I had met BBDO’s agency’s executive VP for diversity and inclusion at a Clinton Foundation event designed to address underrepresentation of people with disabilities in the media, “Lights! Camera! Access!” At the time, I was a creative video producer for the office of the president at my alma mater, Gallaudet University. The VP invited me to the agency and I had no idea what we would talk about, but after, I was offered a job to join BBDO’s Creative Residence Program, which provides real on-the-job experience. When BBDO Worldwide recruited me, it changed my life.

BBDO gave me the space to be a better storyteller. I recall one of my earliest projects (see below), in which I was the art director on BBDO International Women’s Day campaign “It’s Time to Redefine.” It sought to change the online dictionary definition of “woman” and generated 12 million impressions worldwide. It was such a eureka moment for me. I realized there are so many ways you can tell a story and influence behaviors for a better tomorrow.

This year marks my ten years working as a storyteller. Important elements I’ve learned to incorporate in my stories are current social climate and events, celebrate historical moments and integrity. Over this past decade—all my life, my work style has been consistent with this mantra: Push for Change.

One of my proudest works where I “Push for Change” was “Am I Next,” a rare, powerful story inspired by the deaths of George Floyd, Breonna Taylor, and countless others that sparked the nation-wide and global-wide Black Lives Matter movement. With the stories of Black lives being shared, one particular group’s “voice” wasn’t being heard: Black Deaf people.

So “Am I Next?” spotlights the struggle and oppression perpetrated by systemic racism that Black Deaf people experience daily. The police brutality. The non-verbal communications about race in our community. The racist comments. The stares of “You don’t belong here. Go back to where you came from.” Daily, we ask ourselves, “Am I Next?”  We carry our strengths and resiliencies, yet we are in constant fear of our last breath. Will it be sooner than expected? The film contains no audio and sound, but the words and visuals of the Black Deaf community speak volumes.

I collaborated, co-wrote, and co-produced “Am I Next?” with “Marvel’s Spider-Man: Miles Morales” video game and Netflix’s “Politician" actress, advocate, and a dear friend of mine, Natasha Ofili. During the postproduction process, I couldn’t stop crying. At that moment I realized how personal it was to me.

The short film has been viewed over 100K times on Natasha and my social media platforms combined. We wanted to educate and catalyze change within our Deaf community and the world about years of oppression experienced by Black community with disabilities.

BBDO has supported and taught me so much. I am grateful to BBDO. The knowledge, skills, and tools gave me the power to create powerful stories like “Am I Next?” I can’t wait to develop my skills further and “Push for Change” on future projects.

I just don’t “produce” any story. I create an impactful, meaningful story with powerful narrative that will stay with you. Ultimately, I want a story that moves grounds to drive the change. We are here to tell our stories. Especially stories that haven’t been told.

Because at the end of the day, we all matter.