In time for the 155th anniversary of Juneteenth, the holiday marking the end of slavery in the U.S., L.A.-based Black creative collective Three's a Crowd has launched “IN FOR 13%,” an initiative calling on advertising industry leadership to “publicly and actionably” eliminate racist hiring practices.

It's doing that through a simple, straightforward ask: it's inviting agencies to make a Juneteenth pledge to have Black representation in industry leadership roles to 13 percent by 2023, so that it proportionately reflects the U.S. Black population. According to Three's a Crowd, current industry data shows that only 8.1 percent of those working in advertising are Black.

The initiative lays out three phases to achieve more equity in advertising:

“Let everyone see that the people running advertising agencies do not reflect the world we live in,” says Reonna Johnson, co-founder of Three’s A Crowd. “For true change to occur, advertising agency leadership must be the catalyst.”

A film promoting the effort cites various statistics about the lack of Black industry leadership and recounts racist and tone-deaf marketing moves that continue today—such as the Pepsi Kendall Jenner ad and the H&M monkey sweatshirt controversy. It progresses with  a positive tone, stating, "Agencies we're not calling you out. Ok. We are just a little bit. But we're calling you in," before launching into details on the initiative. 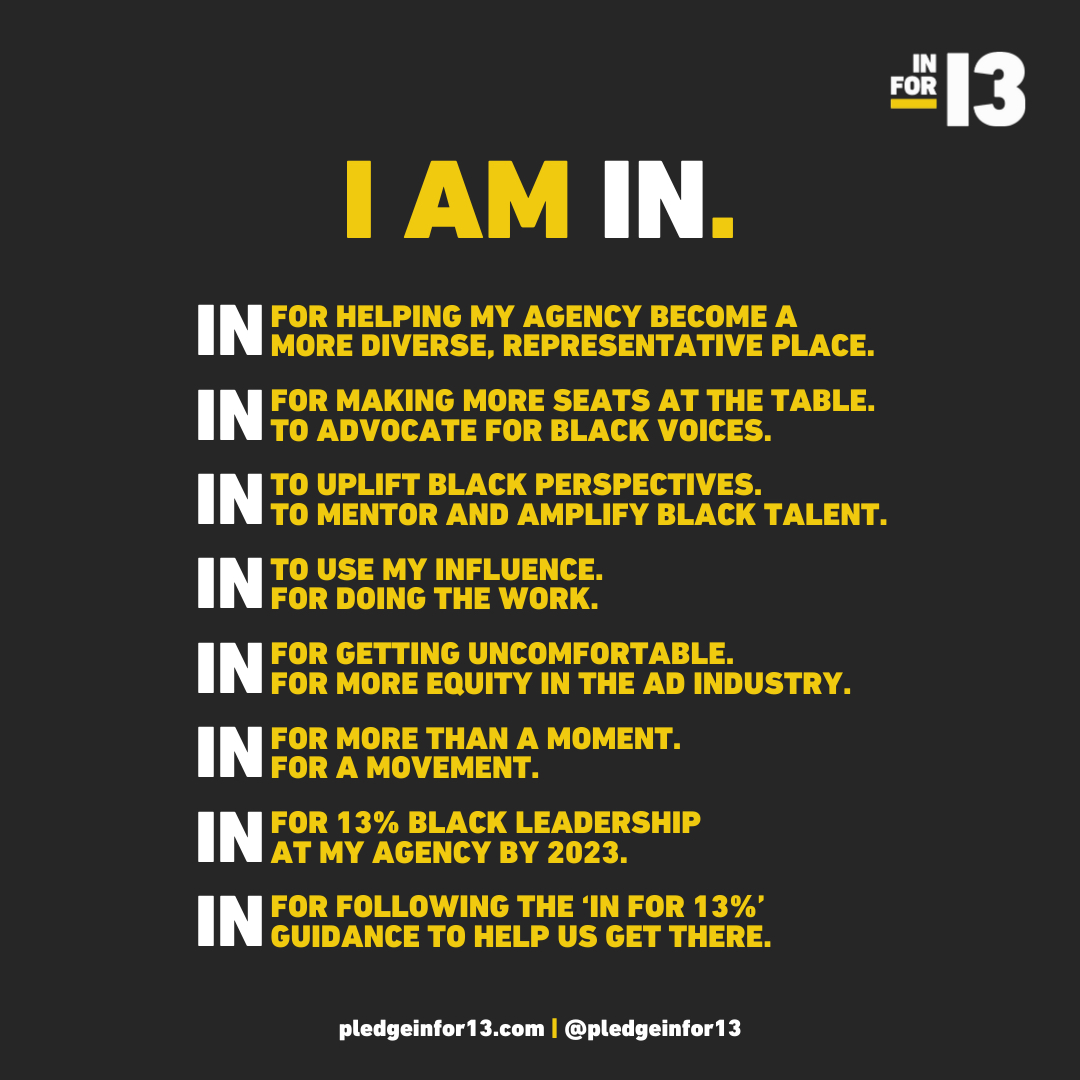 "IN FOR 13%" debuts just as there's been a surge of efforts among Black ad execs and their allies calling on the industry to finally take meaningful steps to real change. Just this week, the 600-plus Black ad professionals who issued a call-to-action letter to agency leaders last week formalized their coalition as nonprofit 600 & Rising and introduced a new campaign calling on agencies to be transparent with the diversity data. Thirty-plus agencies were on board for the launch, with companies including Wieden + Kennedy, The Martin Agency and R/GA releasing their data today.

When asked what she thought of such overlapping initiatives, Johnson believe they're a good thing. "In the world of grassroots organizing, one of the key principles is to employ a 'diversity of tactics,'" she says. "Doing many focused things gives you a higher chance of success than doing one big thing. The pressure is on. What’s also nice about the approach is that agencies can employ the approach that best fits their context."

The emergence of multiple programs shines a light on a harsh truth, she says.  "There's nothing new about what Black Americans are demanding, in society or in advertising. There's no novelty to our demand. Only urgency."

One danger, she says, is that the rise of so many initiatives will overwhelm press and the coverage will recede. "As the coverage dies down, so will the incentive of industry leaders to get real and get serious," she says. "At some point, each of these initiatives needs to be prepared to shift into a new phase—to approach the work like a business problem, with milestones and timelines and stakeholders and accountability."

That's why "Three's a Crowd" built a simple, measurable goal into its pledge. "This level of rigor, accountability and hard quantitative goal setting is exactly what’s been historically missing from diversity/inclusion programs," she says. Three's a Crowd is a "third-party entity, multi-disciplinary in our composition and data-driven in our approach to the problem of inclusion. These qualities set us up to help agencies achieve real success."