Company known for its outrageous marketing ideas will premiere 'Dead Till Death' at L.A. theater on July 11

Canned water brand Liquid Death is out with its latest outrageous marketing promotion: a horror film.

Today, the company dropped the trailer for “Dead Till Death,” a 45-minute scary movie that on July 11 will have a theater debut in Los Angeles as well as its streaming premier. The brand is selling a limited run of tickets to the latter premier for $9 at its website merch store. Following the premiere, the film will stream on Prime Video.

The trailer reveals familiar elements you'd expect from a scare fest: a creepy man spewing cryptic phrases, shaky cam footage of someone running through the woods, young people enjoying themselves in those woods as ominous music plays in the background. But it also has scenes you wouldn't expect—product shots featuring cans of Liquid Death.

To pull it off, Liquid Death founder Mike Cessario tapped Will Carsola, writer and director of Adult Swim show “Mr. Pickles” to direct, as well as production company Neighborhood Film Co., known for its work on the Netflix film “Concrete Cowboy.” 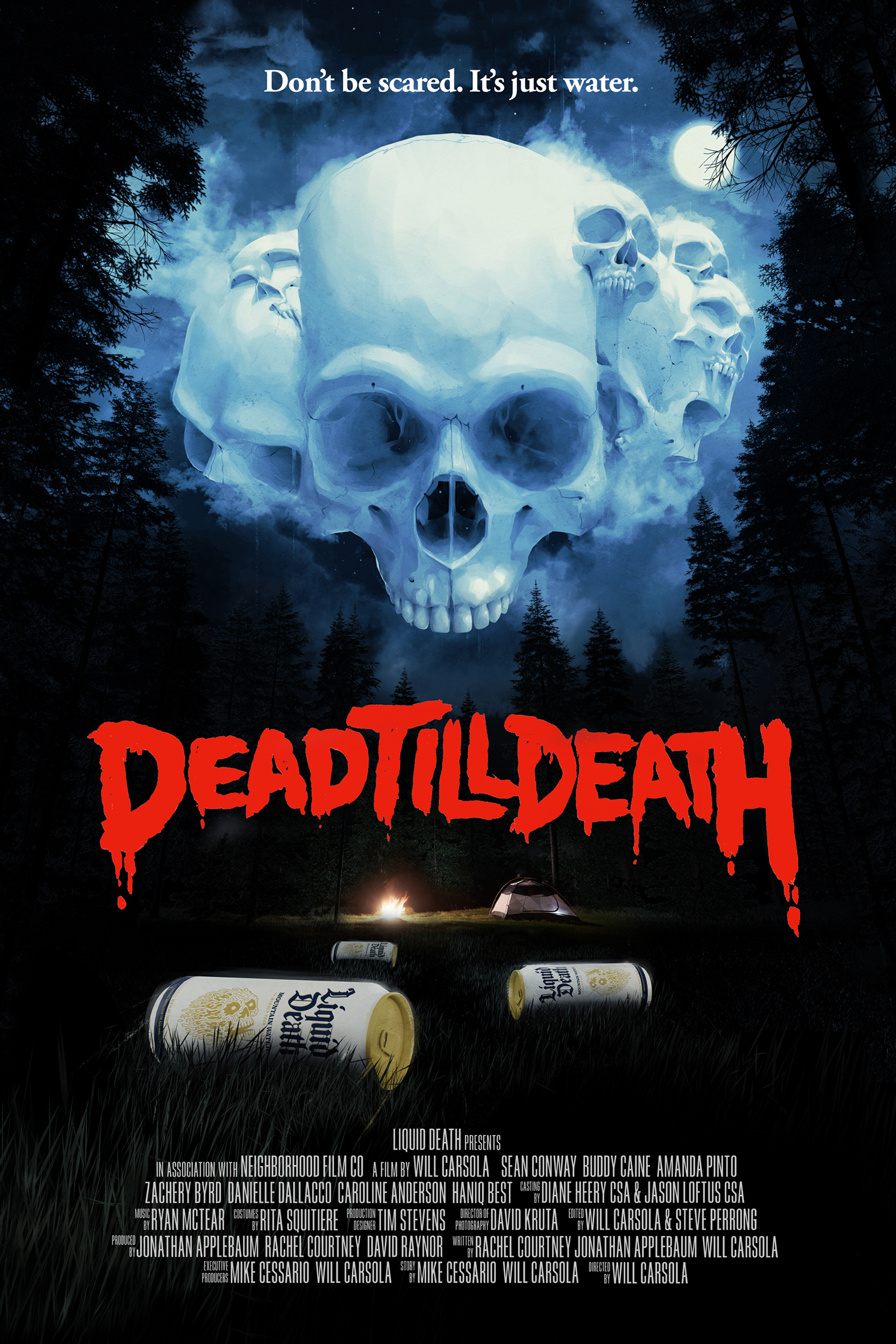 The brand is known for its unusual advertising tactics that look like no other marketing you see in the water category. Earlier this year, Liquid Death worked with agency Party Land to create a 30-minute zombie-themed “infomercial” (plus special headgear) in conjunction with Zack Snyder’s new Netflix film “Army of the Dead.” It also worked with Austin-based Callen to create a line of creepy stuffed animals that showcase the terrors of ocean pollution on wildlife.

Cessario says that what inspires the company’s marketing is consumers’ hatred of typical marketing. “It doesn’t matter the age, demographic or income, people hate being marketed to and 99% of ads they see all day they are suffering through and they’re willing to pay a premium not to see it.”

As for the new movie, that's just the latest move to ensure that the brand breaks through. Cessario, a former creative at agencies including CPB, Humanaut and Vayner Media, says his advertising experience taught him a lot about what to do and what to avoid when it comes to building his brand.

Vayner Media founder Gary Vaynerchuck for example, gave him a few key tips. "I agree with a lot of his points—you're essentially day trading attention," Cessario notes. "How do you find the most efficient way to get awareness for your brand? Yes, you can do that with a TV commercial, but is the eyeball you pay for with TV worth twenty times the eyeball scrolling on a social feed? I think that’s how we always look at marketing. For the price of running one 30-second commercial one time during an OK show, you could produce an entire horror movie that you can possibly monetize or at least create social chatter from. Even if we don’t sell tickets, the awareness through the chatter might be worth it.”

Liquid Death: Liquid Death promotes itself as bong water with the help of Wiz Khalifa

Liquid Death: Liquid Death's weird headgear promises to save you from zombies