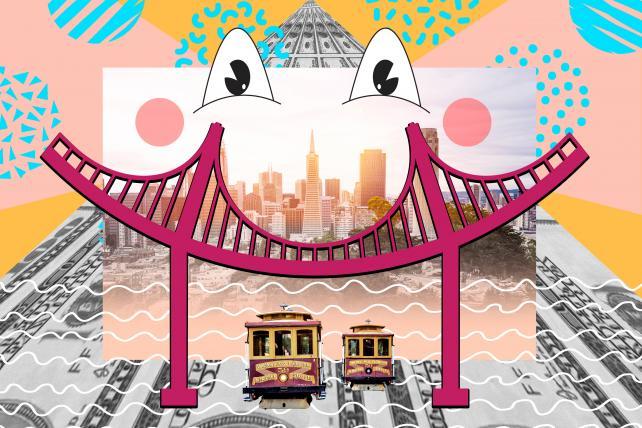 When an account director needed to leave San Francisco for personal reasons, local indie agency Duncan Channon tried an experiment: It invested in a "telepresence robot"—essentially, a videoconference screen on wheels—to keep her connected to the office. Now when the robot glides up to someone's desk at the agency, it means remote staffer Suzanne Montgomery wants to chat.

For Duncan Channon, the experiment had ramifications beyond a single staffer: It was a way to explore the future of work in the country's most expensive market for office real estate and, increasingly, for talent.

"We don't want an army of robots running around. It's not going to be that," CEO Andy Berkenfield says. But San Francisco's rent "is a thing."

According to research from real estate services group Cushman & Wakefield, the average asking rent for San Francisco offices at the end of the third quarter was $74.72 per square foot—surpassing Manhattan's figure of $72.65. (Home rentals are sky-high too: The average San Francisco one-bedroom goes for $3,600 a month, compared with $2,800 in New York City, according to rental site Zumper.) Duncan Channon itself recently faced a 50 percent rent increase when its lease came up for renewal. To manage costs, it gave up a quarter of its square footage and redesigned the remaining space for efficiency, tearing down drywall and creating a loftlike brick-and-wood space that eventually, as the 65-person agency grows, will be too small for its staff.

And it's not just rents that have San Francisco agencies on edge: A talent crunch is escalating as tech companies including Facebook, Apple, Google, Netflix and Intel offer salaries tough for shops to match. A creative can take a freelance role in tech, for instance, and make 35 percent to 40 percent more than at a full-time job at an agency. Some feel it's worth the lack of stability, says Hillary Lannan, a freelance creative recruiter. And full-time jobs at tech companies offer slightly higher salaries than at agencies, as well as stock options or restricted stock units, "which is very sexy and a big financial upside to a lot of people," she says. Plus, there are other perks: Facebook, for example, offers everything from a shuttle to work to an on-campus dry cleaner to financial assistance for egg-freezing.

It's not surprising then, that when Ad Age asked what scares her, Goodby Silverstein & Partners CCO and partner Margaret Johnson didn't hesitate: "Finding and keeping good people in San Francisco."

The conundrum, of course, is that the tech industry is also a reason for agencies to be here, which is why the ad scene has been growing over the last couple of years. Publicis Groupe's The Community announced its arrival here in October, and S4 Capital's MediaMonks is on its way in the first quarter of next year, joining existing San Francisco shops like Omnicom Group's Goodby, which hired 115 people this year, bringing head count to 439. Others that have been here include Venables Bell & Partners, Pereira O'Dell, BarrettSF, M/H VCCP, Argonaut, Eleven and year-old creative shop TBD, which is based for now in a WeWork space, somewhere more startup agencies are going, "though they might not admit it," TBD CEO Jordan Warren says. That allows the agency to prioritize talent over rent, and "clients are looking for agencies that are not wasting money," he says.

And agency life does have its attractions, which is why some people return after working for clients: TBD, for example, hired a creative team from Intel. Agencies, for one, offer a more varied workload. At Argonaut, you might work on Cricket Wireless, Honey Bunches of Oats and personal finance website NerdWallet.

Then there's the agency culture, with different selling points for each shop. Argonaut touts its gorgeous office in the former Avalon Ballroom, where Janis Joplin and the Grateful Dead played. Plus, many tech jobs are in the suburbs, far from the city's action. When agency talent heads to Google or Apple, Argonaut Chief Creative Officer Hunter Hindman says he reminds them: "You're going to be on that bus."

Salem Weresh, a recent graduate of the University of Oregon and an assistant account manager at TBD, not only chose San Francisco over New York, she chose to work at an agency. To save, she shares a one-bedroom with a roommate. "I eat a lot of egg salad," she says. But she loves her work, the proximity of the beach and the city's whimsy. On a recent weekend, Weresh decided between checking out a corgi dog fest or seeing a giant whale sculpture built from discarded plastic.

Johnson of Goodby tells potential hires that "the beach, wine country and skiing are all within one to three hours of the agency."

Of course, some creatives still prefer New York, and the agency has been developing a small presence there since Executive Creative Director Danny Gonzalez relocated to the city for family reasons. (He uses a telepresence screen too, nicknamed the "Dannybot," which his creative partner, David Suarez, totes to meetings.) New York life is a draw for some talent, including those intimidated by the Bay Area's cost of living. "It's hard to believe that New York would be considered less expensive than San Francisco," says Johnson, "but it is."