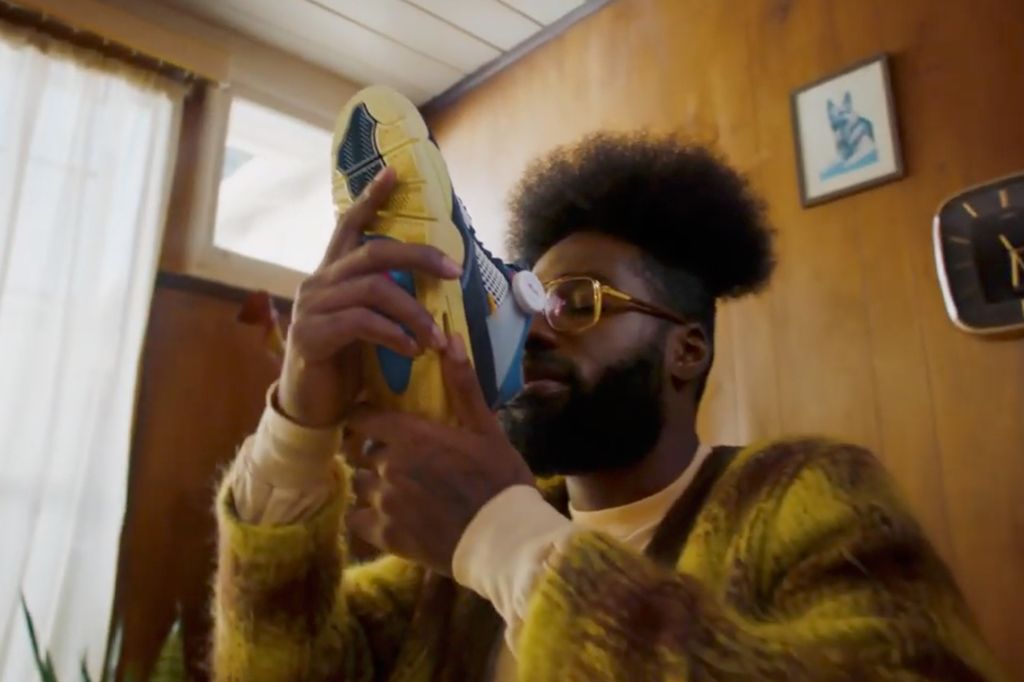 Online shoppers are all too familiar with eBay, but the online marketplace’s latest campaign, in partnership with L.A.-based agency The Many, targets a specific type of online shopper — sneakerheads. eBay is releasing a “All for Kicks,” series of seven short films that showcase hyperreal sneakerhead moments, directed by Ariel Fisher of Tuff Contender.

The campaign launched on June 8 with the first short film “Sniff.” The 15-second video features a sneakerhead sniffing his new pair of sneakers in a tranquil and exaggerated way as he makes sure he gets a good whiff of that new sneaker smell. The camera then pans out showcasing a table with sneakers lined up neatly on top with a candle in the center. The video then ends with a title card that says “Smells legit. But if you want to be 100% get our authenticity guarantee.”

The remaining six shorts will go live once per week on Instagram and Twitter concluding with “Grandma” on July 21. The sneaker community will be able to view all seven shorts on the @ebaysneakers Instagram account.

Toronto agency Berners Bowie Lee’s campaign for the Toronto Association of Business Improvement Areas is a call to action for Torontonians to shop local to help save their neighborhoods.

Toronto has had some of the strictest and longest-running lockdowns in North America. Some restrictions are being lifted, but Toronto businesses are struggling and neighborhoods are changing due to business closures. The average Canadian small business is $150,000 to $170,000 in debt and a total of 181,000 businesses are at risk of closing permanently due to COVID-19 according to a statement by the agency.

As part of the "400 Tombstones" campaign, more than 400 businesses across the greater Toronto area are currently displaying “Buy Toronto Time" posters resembling tombstones. Each poster includes the business name and opening date, but the second date remains blank— indicating that their future is undetermined. There are also over 100 billboards across the city, and an Instagram account, @buytorontotime, that shares moving stories of the participating businesses. 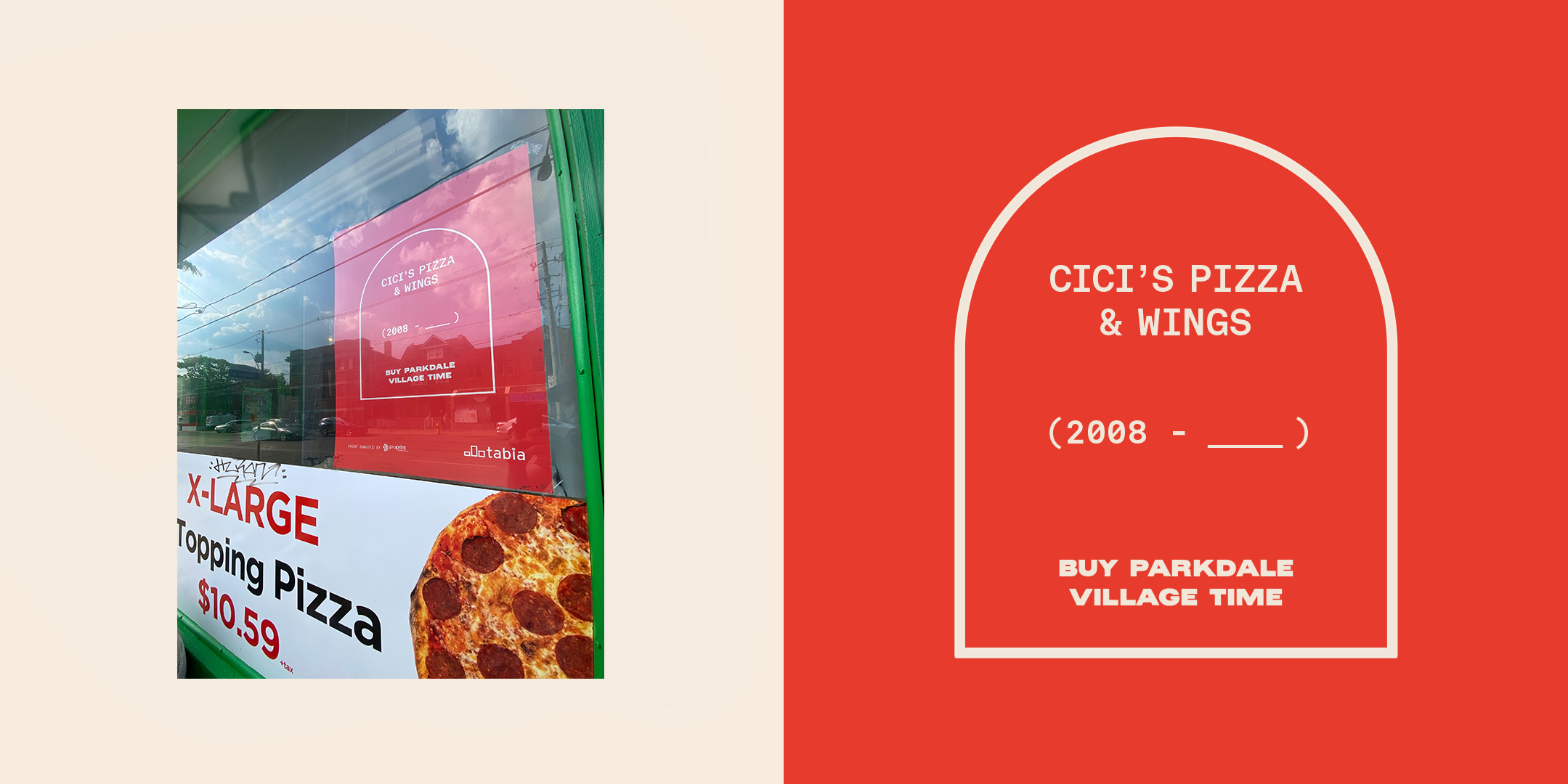 This is the largest integrated campaign for the agency since launching in 2020.

Credit union Credit Human, has teamed up with New Orleans-based agency Trumpet, for its latest campaign. The push features a couple of humorous TV spots that will be shown across local stations in San Antonio. The campaign promotes Credit Human’s new financial health check solution and highlights the underlying stress people can feel when they have loads of credit card debt that they aren’t sure how to manage.

Escape your troubles with gummy bears

Ferrara Candy Co.’s Black Forest Fruit Snacks and Gummy Bears teamed up with the snack’s creative agency of record, Duncan Channon, for its latest “Take Me to the Forest,” campaign. Featured as part of the campaign is a lighthearted TV spot that will appear on various full episode players, YouTube, Facebook, and Instagram, as well as through an AR experience on Snapchat.

The campaign also includes three six-second social ads that use the rallying cry “Take me to the forest,” for people that want to trade the small annoying parts in life for something good. Examples used in the ads include when your dog destroys your new couch, when your laundry pile overwhelms you, or you get your third parking ticket this week.

The campaign launch also marks the introduction of new packaging for the brand, created by Hughes Brand Mix. The updated packaging features a new logo that highlights the “Real Juicy. Real Good.” tagline while emphasizing fruit juice as the No. 1 ingredient for Black Forest Classic Fruit Snacks. Additionally, the brand is launching a new recyclable packaging in September 2022.

Atlanta-based Fitzco, reacquired from Interpublic Group last year by founder Dave Fitzgerald, has retained French’s account and added Cholula hot sauce following a competitive review. Fitzco will be the creative and strategy agency of record for both accounts.

“Fitzco’s work was a home run. For both French’s, a brand they know intimately, and Cholula, a beloved brand we’ve just acquired, their insights and ideas captured the spirit of each brand in unique and highly relevant ways.” Jill Pratt, McCormick & Co.'s chief marketing excellence officer said in a statement.

Boston and Philadelphia-based agency Allen & Gerritsen has been named the agency of record for Penn State THON, the largest student-run philanthropy in the world, and THON’s sole beneficiary, Four Diamonds, a non-profit gift fund. The decision was made following a 4-month review which included 10 agencies in total, according to a person close to the situation. It is unclear if the incumbent, Finn Partners, participated in the review.

A&G will work with the two organizations to expand their national presence and advance brand recognition through targeted public relations and influencer marketing campaigns. The partnership will also include an educational curriculum to teach THON student volunteers the craft of public relations through workshops and monthly development meetings.

Boston and New York-based agency Hill Holliday was named creative agency of record for Egglife Foods after a review process that included 13 agencies initially which was cut down to six that participated in the formal RFP process, according to a person close to the situation. The full scope of the work for the company. which was created in 2017, includes strategic planning and creative leadership, including digital, social, and traditional channels.

Interpublic Group of Cos. has released its climate action plan that consists of its climate goals moving forward. IPG also published its first Sustainability Accounting Standards Board report, “becoming the first company globally to publish in alignment with SASB’s Advertising & Marketing Sustainability Accounting Standard,” according to a statement by IPG. One goal major goal is IPG's commitment to sourcing 100% renewable electricity by 2030 for its entire portfolio.

Havas Group released a progress report of its corporate social responsibility program for 2020, Havas Impact+, including its 2020 carbon footprint results. The Group pledges to achieve carbon neutrality by 2025. By the end of 2020, Havas Group achieved a reduction of GHG emissions by 32% in absolute terms and by 31% per collaborator, from a 2018 baseline, according to the report.

"The two-year fellowship program provides broad and deep experience across multiple disciplines and expertise, giving recruits a chance to understand the full spectrum of communications, marketing, creative, experiential, and relationship marketing that bring the automaker’s campaigns to life," according to a statement by IPG.

Mid-2021 is the target start date for the candidates.

TBWA\Worldwide has appointed Alyson Stevens as global head of connected intelligence and Michael Horn as global head of data product. For the newly created roles, Horn and Stevens will be jointly tasked with “shaping and delivering the vision of a future TBWA collective that is exceptionally connected, finding opportunity in cultural change and focused on business impact,”  according to a statement by the agency. Stevens joins TBWA from Publicis Media, where she served as senior VP and director of insight and analytics. Horn joins from Huge, where he served as chief data officer,

UTA Marketing, the brand consulting division of global talent, entertainment, and sports company UTA, has hired Mike Densmore as its first head of growth and innovation. Densmore most recently served as the CEO of Forsman & Bodenfors, where he launched new partnerships with brands such as Hyatt, Diageo, YouTube Music, and Saucony, among others. Prior to that, he served as the global chief growth officer at Bartle Bogle Hegarty.

Independent creative agency Gut opened an office in Mexico City, Mexico. This is its first office in Central America and fifth in the independent network, which has offices in Buenos Aires, Miami, Sao Paulo, and Toronto.

Havas Studios has appointed former Rattling Stick "First Lady," Katie Keith, as its global head of content. Keith has also been named head of production at Havas London. The dual role is meant to create a “unique, hybrid proposition designed to foster collaboration and instill a production-led ‘makers’ ethos into the heart of the creative agency,” according to a statement by Havas.  She will be replacing Patrick Cahill and Sarah Barclay, who previously held the roles of joint head of integrated production. Cahill left the company in May, and Barclay, who doesn’t have an assigned job title yet, will now report to Keith.

California-based agency FG|PG has hired Phil Koutsis as its first chief creative officer in its 20 -year history. For the past nine months, Koutsis has served as FG|PG’s Chief Creative Officer Pro Tem. Koutsis previously served as exec creative director of We’re Magnetic, where his clients included Netflix, Facebook, Airbnb, TikTok, Samsung, American Express, and OpenTable. Prior to that, he was senior VP, group creative director at Momentum Worldwide.

California-based agency Butler, Shine, Stern and Partners has hired Robyn Tenenbaum as its new creative director. In the newly created role, Tenenbaum will lead the team working on the agency’s  Blue Shield of California account.

Communications and marketing agency Weber Shandwick has promoted its chief growth officer, Susan Howe to president. She will continue to report to Gail Heimann who has held the dual roles of CEO and president since she became CEO of the IPG agency in 2019.

“Just over 18 months ago, we asked Susan to take on the new role of chief growth officer, with oversight for all of our regions. Susan played a key role in achieving stability during those exceedingly complex months,” Heimann told Ad Age. “As President, Susan will be charged with deepening integration across our ecosystem and driving cross-functional collaboration at a global scale in essence, taking her current remit to the next level.”

PR giant Edelman has named  Christoph Becker as its first-ever global chair of integration.  Becker, a 35-year veteran of the advertising and marketing industry, will help drive integration by joining up expertise across the network’s full array of offerings including creative, data and intelligence, digital, corporate, executive positioning, and strategic planning. Prior to this, he served as CEO and chief creative officer of Gyro, a creative agency he co-founded 12 years ago.