Interpublic Group of Cos.' Initiative has hired Nick Pahade as North America president and CEO. The 37-year-old executive, most recently CEO of web-based media-services agency Traffiq, will succeed Tim Spengler, who was named CEO of Interpublic's MagnaGlobal. 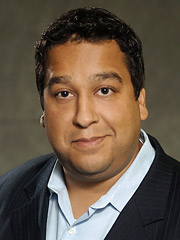 The appointment follows a number of changes at the firm motivated by the exit of global CEO Richard Beaven, which will take effect at the end of 2012. Jim Hytner, who led sibling agency Universal McCann's global G-14 operations, succeeded Mr. Beaven.

Mr. Pahade's "vast experience of digital marketing across media, digital agencies and technology will be invaluable as Initiative North America seeks to deliver ever more technology-driven, innovative communications work for clients across all media," Mr. Hytner said in a statement. "His entrepreneurial background and work in advising startups will be invaluable to Initiative ."

While Initiative has recently made a flurry of changes, bringing in a young CEO from outside traditional media is the firm's most surprising move. Mr. Pahade ran a 40-person firm at Traffiq; he'll now oversee more than 500 employees.

Before joining Traffiq, Mr. Pahade was president of TrueAction, the digital and e-commerce agency arm of GSI Commerce, before GSI was acquired by eBay. Prior to that , he was president at Publicis Groupe 's media-futures unit, Denuo. In the 1990s, he sold digital-marketing firm Beyond Interactive, which he cofounded, to Grey Global Group. He was also managing director of MediaCom Digital.

Reporting to Mr. Hytner, Mr. Pahade will oversee the firm's U.S. agency and Initiative Canada. He will also join the North America Board of IPG Mediabrands.

Asked how the job materialized, Mr. Pahade said he initially approached Mediabrands about potential business between the two firms and in the process the talks shifted to address the CEO opportunity.

"I wasn't really interested at first, but after spending some time with Matt [Seiler] and Jim [Hytner], I had a better understanding of what they were looking to do," Mr. Pahade told Ad Age . "Ultimately, what they saw in me is that I'm passionate about digital marketing and even more about using technology and utilizing other platforms to drive innovation. Using those things and applying them across the business is really what we're trying to embrace."

At Traffiq, Senior VP Lori Goldberg will succeed Mr. Pahade and take on the role of president.

Last year was a tough year for Initiative , so the new CEO will certainly have his hands full on the new business front. The firm lost its $300 million Bayer business and its $700 million Home Depot account. Offsetting some of the loss, it won the $150 million Hasbro media-buying and -planning business, as well as USAA, LifeLock and Petco.