Apple Gets a New Dedicated Group Inside Digital Agency Rosetta

Move Precedes Publicis-Omnicom Merger, Which Will Bring Top Apple Shops Under One Roof
READ THIS NEXT
How Marcus Thomas is providing greater access to the industry for diverse high schoolers

Even as Apple brings more marketing resources in-house, digital agency Rosetta looks to be protecting its relationship with its longtime client with a dedicated Apple group called Level Studios.

The Publicis Groupe-owned shop recently introduced a barebones site at www.level-studios.com that resembles a recruitment tool. It features the line, "The Right Kind of Agency, the Right Kind of Entourage." Under "Client List," there's only the Apple logo. Though Rosetta isn't mentioned anywhere, contact details include addresses for all of Rosetta's office locations.

Level is the name of an agency Rosetta acquired in 2010. 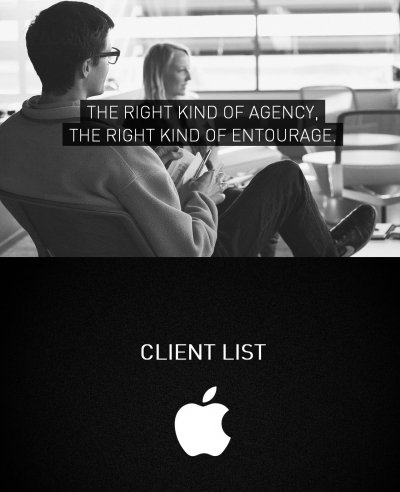 The move seems at least partly meant to help secure the companies' long-running relationship. Apple has been moving to bulk up its in-house marketing team, and Omnicom and Publicis's merger later this year bring a bulk of Apple's agencies, including Omnicom's TBWA/Chiat/Day and Omnicom Media Group, under one roof. It's unclear what impact the merger will have on Rosetta's, or any other agency's, relationship with Apple, but Level could be one attempt to help maintain some ownership and confidentiality.

Rosetta already has a dedicated Apple team, but a separate agency brand would isolate the account from other clients even more, which might appeal to Apple given its famous concern for secrecy. The model could even help Rosetta expand its relationship with Apple globally if the agency were to open Level offices abroad.

It doesn't hurt that Level is a brand with which Apple is comfortable and familiar. West Coast digital shop Level opened its doors in 1995 -- it went by the name Web Associates until a rebrand in 2008 -- and began working with the consumer electronics giant a few years later.

Rosetta acquired Level Studios in 2010, and Publicis acquired Rosetta in 2011. Level remained independent within Rosetta and its CEO, Tom Adamski, held onto his Level role until summer 2012, when he was named president and chief client officer of Rosetta. Around that time, Rosetta completely absorbed and retired the Level brand name.

This year, Mr. Adamski assumed the role of CEO of Rosetta.