The Martin Agency has named Tasha Dean to chief revenue officer, a newly created position that aims to reinvent how the agency gets paid for its intellectual property.

The agency is currently compensated based on hours, which CEO Kristen Cavallo believes may undervalue an agency's work.

“[Getting paid based on hours] would lead you to think that the longer you spend, the better the idea, but that's not always the case,” Cavallo said. “If we got paid more based on the impact that an idea made instead of the hours it took to make the idea, [clients] might see things differently.”

The position was co-created by Cavallo and Dean, who moves from exec VP and head of production.

Ad Age's Marketers of the Year

Dean, who will report to Cavallo, is charged with evaluating strategic “big bet” initiatives that will grow the agency both financially and creatively.

“Creativity is an intellectual resource,” said Dean. “We have to look at the value of creativity not only from the financial side of things, but also what are the benefits to our clients.”

Dean will regularly work with client marketing and procurement departments to educate them on the value they will get out of a campaign. “If we get into a situation where it's just about driving rates down and they don't have the full context, that's a playing field that you're never going to win,” Dean said. “It's really about how do we level that playing field by giving them context and education, so that they can see our point of view.”

In the new year, Dean plans to double down on Martin’s influencer and intellectual property partnerships as key growth pillars. Another way Martin is finding new revenue streams: children's books. The agency created its first book "Lil Ruby," written by Martin Chief Creative Officer Danny Robinson in partnership with author Jelani Memory who writes the "A Kids Book About" series, which helps children tackle tough topics. More books and a short film—also directed by Robinson—will be released in Spring 2023.

Cavallo also cited the re-airing of ads as a missed revenue opportunity, such as the iconic Hershey Co. ad that has had Hershey's Kisses playing the tune "We Wish You a Merry Christmas" like handbells for 33 years.

Dean, who joined The Martin Agency in 2018, has worked with brands such as Geico, Nissan, Adidas, Visa, Apple and Johnson & Johnson. Before The Martin Agency, Dean worked at TBWA for more than eight years, most recently as director of digital operations and digital production.

This is the latest C-suite change for The Martin Agency, which saw Cavallo add the title of MullenLowe Group global CEO to her responsibilities in November. 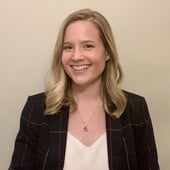