What's this?
This content is created by an Ad Age Publishing Partner. Find out more about this program.
Bazaarvoice

How to Define Purchase Intent in the Data Age

There's no question that today's marketers will be left behind if they're not using data in their digital advertising campaigns. The entire industry relies on both first- and third-party data when making their ad buys and targeting their audiences. However, despite understanding the power of data in theory, data providers and planners still lack clarity and confidence in the type of data they're using.

Recent events support the growing skepticism and mistrust when it comes to advertisers and data providers. Facebook has disclosed a series of measurement glitches that reflect material discrepancies between actual campaign performance and what was originally reported by the platform. Twitter has faced similar pressure from brands that are questioning whether the platform is over-reporting the presence and impact of bots on brand campaigns.

So, where do we go from here?

We need to return to basics. Advertisers need to take a step back and evaluate what their goals are and which types of data will ladder to those key perfomance indicators (KPIs). All marketers agree that placing relevant ads in front of consumers with the strongest intent to buy will generate a compelling return on ad spend. Otherwise, you're wasting ad dollars on the wrong people. The challenge is defining what purchase intent means to you and finding the right data sets that signal that intent.

Rethink your definition of purchase intent

The concept of an "in-market consumer" and "purchase intent" seems like marketing 101, but we can be doing a better job of unpacking what specific behaviors and metrics indicate the greatest propensity to buy. For some forms of digital media, "in-market" might just mean that the shopper has visited a website or product page a couple of times. In these instances, advertisers have turned to simple retargeting tactics.

As digital advertising has advanced, advertisers have additional data layers at their disposal to create more sophisticated audience segments. When advertisers evaluate what type of data they're using in their campaigns, they should think about which factors are in play and poke around to learn how they are weighted. Where does my ad data come from? When was it last refreshed? Does it include behavioral data from elsewhere on the web? All these considerations can help advertisers better define what qualifies shoppers as "in-market." Then they can focus on how to target those audiences most effectively.

How to infuse e-commerce data into your advertising

It's common knowledge that most digital advertisers are partnering with data giants like Google and Facebook, but the dark horse in this equation is Amazon. According to the company's financials, Amazon's "other" revenue—suspected to consist mostly of advertising revenue—grew 60 percent to $1.3 billion in 2016. Furthermore, eMarketer predicts that Amazon will generate $1 billion in ad revenue in the U.S. in 2017. What's behind this accelerated advertising growth?

What differentiates Amazon's advertising data from other data sources' is that it's based on shopping behavior. Rather than building ad campaigns around demographic data or lookalike audience models, Amazon is able to employ shopping data to demonstrate (and target against) a shopper's intent to buy something. If consumers are frequently visiting product pages, reading ratings and reviews or viewing visual content, those behavioral signals indicate a high level of interest and consideration.

Advertising businesses from other leading retailers are cropping up for similar reasons. For instance, Walmart's ad platform is based on first-party in-store and online transaction data sourced from the retailer's online store as well as its many brick-and-mortar locations. Similarly, Target debuted its Target Media Network last year, which allows brand marketers to place ads in front of active shoppers visiting Target's website or using its mobile app.

The underlying thread between these new ad platforms and media networks is that retailer data is fresh, first-party and based on shopper behavior and purchase intent. Therefore, marketers can hyper-focus their digital advertising to these "in-market" audience segments by rooting their campaigns around this type of data.

More advertisers are starting to adopt and invest in the concept of retailer data, but the downside of using retail data is that it's limited to the retailers' web properties and physical stores. What if data providers could take it one step further by collecting shopping data across multiple retailers in the online ecosystem? If advertisers could access shopper data across multiple websites, product pages, and categories, they'd achieve massive scale and reach. Furthermore, advertisers could build sophisticated and robust shopper profiles based on consumer activity across the entire online universe, not just one retailer's website.

Going back to the notion of raising the bar in terms of what constitutes an "in-market" shopper, the broader the reach of your data, the better. Having diverse, constantly refreshed data points will allow you to paint the clearest picture of the customers who are most likely to convert.

Digital advertisers have just begun to scratch the surface when it comes to defining purchase intent and utilizing the type of data that demonstrates it. It won't be surprising if more retailers start positioning their first-party transactional data as fodder for targeted ad campaigns. In today's noisy, competitive digital advertising landscape, marketers have a huge opportunity to make their ad dollars work harder if they root their campaigns in relevant, timely data that signals a strong intent to buy.

Bazaarvoice helps brands and retailers find and reach consumers, and win them with the content they trust. Each month in the Bazaarvoice Network, more than one-half billion consumers view and share authentic consumer-generated content (CGC), including ratings and reviews as well as curated visual content across 5,000 brand and retail websites. This visibility into shopper behavior allows Bazaarvoice to capture unique first-party data and insights that fuel our targeted advertising and personalization solutions. Founded in 2005, Bazaarvoice is headquartered in Austin, Texas with offices across North America and Europe. For more information, visit www.bazaarvoice.com . 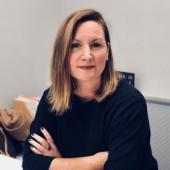 Toby McKenna oversees all lines of business and revenue growth for the company's advertising division. Prior to joining Bazaarvoice, McKenna was the executive vice president and general manager for fan engagement platform Answers.com, where she was responsible for leading sales, editorial, revenue operations and new business for the company. With more than 15 years of experience leading digital sales and marketing teams, McKenna's deep industry knowledge and expertise span across media, mobile, and e-commerce. Over the course of her career, she has been instrumental in growing the digital business for some of the world's most recognized brands such as The New York Times, Priceline, American Express and Yahoo.