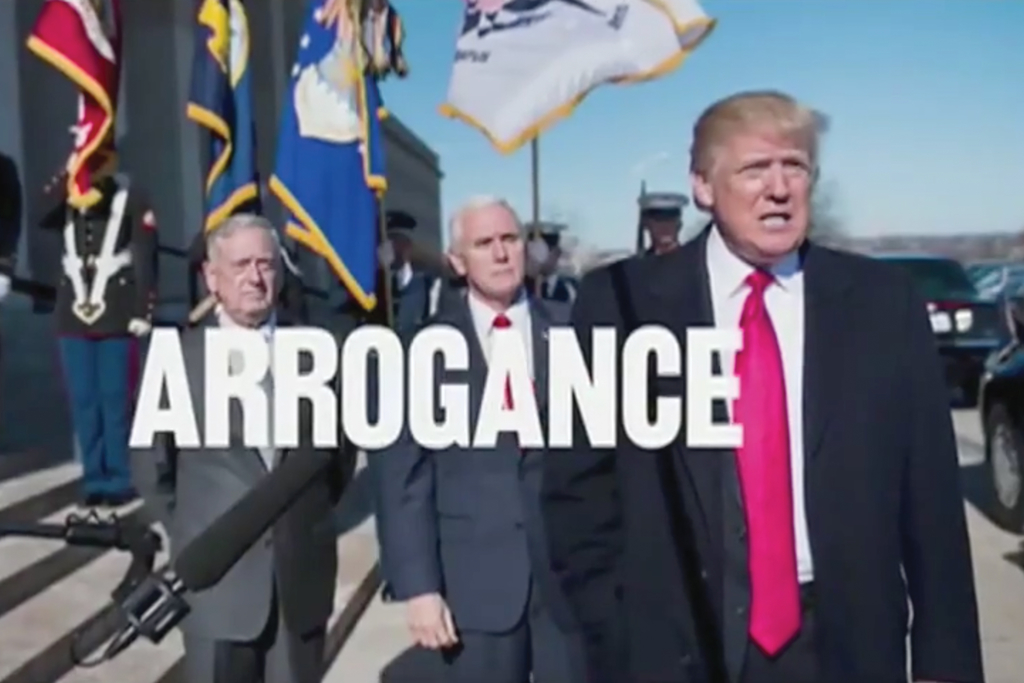 An image from a Bloomberg TV commercial criticizing President Trump.

How can we begin to properly process the impact of Mike Bloomberg’s ad spending on the 2020 presidential campaign? To reference Police Chief Martin Brody (Roy Scheider) of “Jaws,” we’re going to need a bigger boat—or a bigger metaphor. The Bloomberg Effect is just too epic, too disruptive, too unprecedented.

Actually, the billionaire media mogul and former New York City mayor is spending so much on campaign ads that we’re not really talking about bigger-boat or even luxury-yacht levels. It’s like Bloomberg is steering his own personal ocean liner through the foamy electoral waters.

According to the latest Ad Age Datacenter analysis of campaign ad spending in partnership with Kantar/CMAG, Bloomberg’s outlay has hit $246 million to date—primarily on TV ads but also including radio and $28 million in combined Facebook and Google (and related properties) spending. (The next Democratic runners-up in total ad spending, hedge fund billionaire Tom Steyer and Senator Bernie Sanders, are at, respectively, $152 million and $27 million, while President Trump is at $52 million.)

It cost $7.5 million to make the Titanic back in 1912, or nearly $199 million in 2020 dollars, adjusted for inflation. (We’re not implying anything by citing the Titanic—honest.) A state-of-the-art, modern-day ocean liner can go for a cool billion-plus; Royal Caribbean’s Allure of the Seas, for instance, cost a reported $1.4 billion to build. Per a mid-January New York Times headline: “Michael Bloomberg Is Open to Spending $1 Billion to Defeat Trump.”

At this moment, no serious observer of the political scene expects Bloomberg to become the Democratic front-runner, and even the candidate himself doesn’t seem to be banking on it.

According to a FiveThirtyEight meta-analysis of major national polls as of Jan. 23, Bloomberg is hovering at 7.3 percent support, behind Joe Biden (26.6 percent), Bernie Sanders (20.4 percent), Elizabeth Warren (15.8 percent) and Pete Buttigieg (7.6 percent). Some polls have him in fourth place, a few tenths-of-a-percent, give or take, ahead of Buttigieg.

Bloomberg’s ad spending, then, seems to be more about being a forceful and persistent anti-Trump avatar, and he’s already thinking about what he’s willing to burn through to back the ultimate nominee whose job it will be to actually beat Trump. That outlay, he told the Times, “depends on whether the candidate needs help; if they’re doing very well, they need less. If they’re not, they’ll need more.” And he’s certainly got more to give (his net worth: an estimated $60 billion).

Sure to surge past the quarter-billion spending mark any minute now (perhaps even by the time you’re reading this), could Bloomberg hit half a billion by spring? We wouldn’t bet against it.

One strategy note: Bloomberg has spent nothing specifically targeting Iowa, where caucuses will be held Feb. 3. (Steyer is the largest spending candidate targeting this early state, with more than $15 million.)

So let’s circle back to the need for a bigger metaphor. Maybe let’s forget floating conveyances, since Bloomberg’s metaphorical ocean liner likely won’t take him anywhere near the Oval Office. Instead, perhaps we should think of Mike Boomberg as the Great White itself—Jaws chomping its way through the body politic and striking fear into the hearts of political media buyers across the land (who have to helplessly stand by watching ad inventory get marked up and devoured).

While we’re at it, we might as well pivot to another “Jaws” quote—this one from oceanographer (Matt) Hooper: “What we are dealing with here is a perfect engine, er, an eating machine. It really is a miracle of evolution.”

Presidential campaign media spending
Overall and for Iowa. Dollars in millions.
Iowa-targeted presidential campaign media spending
By DMA. Dollars in millions.
Source: Spending includes TV, radio and digital spending from Kantar/CMAG. TV and radio spending include broadcast TV, local/regional cable and satellite TV, radio and Spanish-language local TV. Digital includes Facebook and Google properties. Spending allocated to Iowa in these tables excludes digital. Buys are included from Jan. 1, 2019, through Election Day, including advance bookings as of Jan. 21, 2020. All other includes spending by candidates who have dropped out of the race. Spending for Tom Steyer includes Act Now on Climate Change and Need to Impeach. Spending for Donald Trump includes Committee to Defend the President and Judicial Crisis Network. Spending by Tulsi Gabbard in Iowa was less than $500,000. The Iowa caucuses are Feb. 3, 2020.