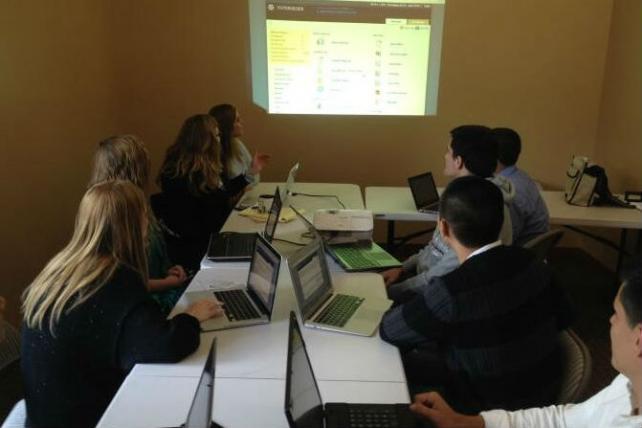 Dave Griggs struggled to hear the phone above the rain and whipping winds of a summertime storm climbing up the east coast last week. The Democratic Legislative Campaign Committee's national field director was in Miami, battening down the hatches for the inevitable electoral gales to come in November. Mr. Griggs and two other DLCC colleagues were in the dreary Sunshine State for some follow-up training with campaign staffers working on local races.

Mr. Griggs is not alone. Democratic and Republican party operatives have trekked across the country to teach state party caucus representatives, campaign staff, down-ballot candidates and their volunteers how to use the data and technology platforms the party organizations at the national level tout as key to 2014 midterm success.

The goal right now on both sides is prepping for the unglamorous groundwork -- volunteer and supporter organizing, voter outreach and lots and lots of door-knocking.

"I've hopped on the plane twice in the last two months," said Jill Bader, Republican State Leadership Committee Communications Director, who would only say her destinations were in the South and Midwest. The RSLC, which like the DLCC assists candidates running for statewide legislative offices, hosted its Majority Makers retreat in March in Washington, D.C. It featured an agenda of digital training for candidates and campaign operatives from around the U.S.

The two groups are contending in more than 6,000 state legislative races in 2014, according to Ballotpedia.

The RSLC, which also works to elect Republican lieutenant governors and secretaries of state, has boosted its internal team dedicated to educating state caucus and campaign staff to six. Along with the national get-together, the organization will offer an online training session later this summer, in addition to simply picking up the phone to help operatives when needed.

"A lot of the caucus directors in the states are facing really similar challenges to people in other states," said Ms. Bader.

Wooing the drop-offs
In South Florida, the DLCC aims to woo "drop-off Democrats," that is, likely Democratic voters who historically sit out non-presidential elections.

"We're gonna cut a voter-contact universe that is very specific in Florida," said Mr. Griggs. "The name of the game is turnout." The DLCC will develop data models based on information in individual voter profiles to identify the so-called drop-offs, then train staff on how to speak to them and get them registered to vote if need be.

In a heavily-populated state such as Florida, using data to segment and target voters becomes more valuable than a place like Montana, where it requires fewer resources and staff to reach most or all registered voters.

"You need to be smart about how you target," Mr. Griggs said. "You don't knock on every door because of time."

As with the majority of campaigns on the left, the tech training is focused on NGP VAN, the platform of choice for the Democratic National Committee, other party organizations, and big advocacy groups like Ready for Hillary.

"The VAN" is the hub for the voter file data that is accessed by left-leaning campaigns across the country to organize and manage door-to-door contact lists for canvassing, and ingest new data gathered as by volunteers as they meet with voters.

Those participating in DLCC training also learn to use MiniVAN, the mobile version of the system, which allows volunteers to submit information gleaned while talking to voters, lets campaign staff update contact lists based on that new data and uses GPS to keep track of staff whereabouts.

Mr. Griggs calls the effort, part of the DLCC's Grassroots Victory Program, a "smart investment" that "pales in comparison" to the more traditional and more costly direct mail or TV budgets.

While the practice of isolating narrow segments to reach voters with targeted messages can have limited impact in districts with smaller populations, it can be effective in statewide and municipal elections where results have razor thin outcomes.

"We routinely win and lose races by very small margins," said Mr. Griggs. The organization is setting its sights on states in which Democrats have the greatest opportunity to flip chambers from Republican to Democratic majorities, including the Arizona Senate, Arkansas House, ­Iowa House, New Hampshire Senate, ­Pennsylvania Senate and ­Wisconsin Senate.

Tech subsidies
The Grassroots Victory Program began in 2012, and has since tripled to encompass around 220 organizers tasked with attending training sessions held in Washington or in their home states, then disseminating what they learned to campaign staff and volunteers. The DLCC held its national training for 130 of these educators representing 24 states in late May in D.C. The organization is subsidizing the salaries of some of these trainee/trainers.

The RSLC helps fund access to voter data for legislative campaigns, offering them use of the Nation Builder data platform at a subsidized rate. "We pre-load the voter file from each state," said Will Martinez, who is leading the .GOP initiative. Mr. Martinez's atypical political organization title -- VP, sales and marketing for .GOP -- reflects the RSLC's mission to coax every state-level candidate campaign and eventually even federal candidates to host their websites on the .GOP domain. In part, the idea is to ensure campaigns are using the same standard set of backend technologies, including the platform that operates supporter site registration. Mr. Martinez plans to train campaign staff on getting set up on the .GOP domain.

Among the RSLC's key lieutenant governor races are those in states that also happen to be important presidential swing states: Florida, Iowa, Ohio, Pennsylvania and Wisconsin.

"We need to do very well this year to set ourselves up for a strong infrastructure in 2016," said Ms. Bader.

For both sides, the idea is to build a network of tech-savvy operatives at the ready to teach others, or swoop in and take over if needed. In some cases, they will foster professional field organizations in states where they have never existed for state legislative candidate campaigns.

Interns working with the Jason Ritchie For Congress in Washington's 8th district got training on the NGP VAN system recently from the Democratic campaign's Field Director Shayna Daitch. "I can limit their permissions to what they can see and what they can access," she said, explaining that currently the interns only have access to the campaign's virtual phone bank for calling voters, which provides contact name and gender, call scripts and pre-set options describing how the call went.

The campaign is also teaching people how to use the mobile app for field canvassing. While younger volunteers gravitate towards the mobile platform to locate homes and input information, some prefer the analog approach.

"Your average volunteer is over the age of 60," said Ms. Daitch. "They still have problems with technology. ... They would rather take a walk list with a map and a pen and clipboard and knock on doors."

Still, understanding how to use digital tools to access and manipulate voter data is de rigueur for campaign operatives under the age of 30, said Conor Bronsdon, campaign manager for Ritchie for Congress.