In marketing stunt, BMW drives in the straightest line possible across U.S.

The path takes the X5 crossover from a South Carolina plant to the L.A. auto show

In its latest marketing stunt, BMW played it straight—all the way from South Carolina to Los Angeles. To promote its American-made X5 crossover, the German luxury brand filmed a road trip from the car's birthplace at a Spartanburg plant directly to a stage at this week's L.A. auto show. The catch: The crossover took the straightest line possible between the two cities, no matter what obstacles stood in the way.

The 10-day, 11-state journey was orchestrated by BMW's U.S. agency, Goodby, Silverstein & Partners, which plans to convert footage of the trip into a TV ad that is expected to debut in January.

The route, as described by agency partner Rich Silverstein, included several instances where the crew had to get creative. After leaving Spartanburg, the X5 headed into farm country. "Instead of going left or right we got permission to go right across a field on an old tractor road," Silverstein says. When the vehicle came upon the Mississippi River, it crossed via barge, rather than detouring north or south to take a bridge. 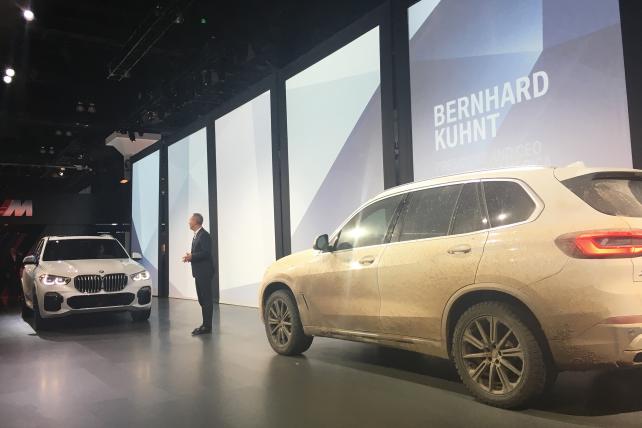 BMW of North America CEO Bernhard Kuhnt drove the X5 onto the auto show stage Wednesday morning. The car, full of dirt from the trip, wasn't washed, creating a contrast at the show, where even the smallest of windshield smudges are typically wiped away. The brand played a video (above) as part of the presentation. It shows the X5 motoring through muddy roads and fields. For dramatic effect, the film also shows the vehicle running through slices of Americana like a demolition derby and a football game.

While the footage will be used for a traditional TV ad, BMW is banking on the stunt gaining notice on social media.

BMW challenged Goodby to "think outside of just your general television production," says Trudy Hardy, VP of marketing for BMW North America. "What can we do at any point in time during the year to really capture and garner buzz?" She says the road trip plugs the X5's American birthplace while spotlighting its ability to handle treacherous terrain.

To film the trip, BMW and Goodby used a 35-person crew and a six-vehicle convoy that included a motorhome, a cargo truck, two X5s, a van and a pursuit vehicle. The film is directed by Jonny Mass and the production is handled by Missing Piece. Daily footage was sent to San Francisco for editing.

The stunt kicks off the marketing campaign for the 2019 X5, one of the most important vehicles in BMW's fleet. The Spartanburg plant has made 2.2 million of them for the global market since the vehicle debuted in 1999, according to BMW. The 2019 model includes a semi-autonomous driving system that permits hands-free driving on limited-access highways and for speeds below 37 mph, according to Automotive News.

Below, a detailed description from Goodby of the route the X5 took across the country:

- and the historic town of Helena-West Helena, Arkansas

- right through the middle of Little Rock via US 40, Arkansas

- through the small town of Nazareth, Texas, via State Route 86

- through Magdalena, Socorro and Pie Town, via US 60 in New Mexico

(This doesn't include all the roads, or the unpaved tracks, trails, dirt roads and fields.)