Law enforcement officials said the crash integrity of the Genesis GV80 — and Woods' use of a seat belt — may have saved his life
READ THIS NEXT
No more taboos: Why brands are telling the unvarnished truth about bodily functions 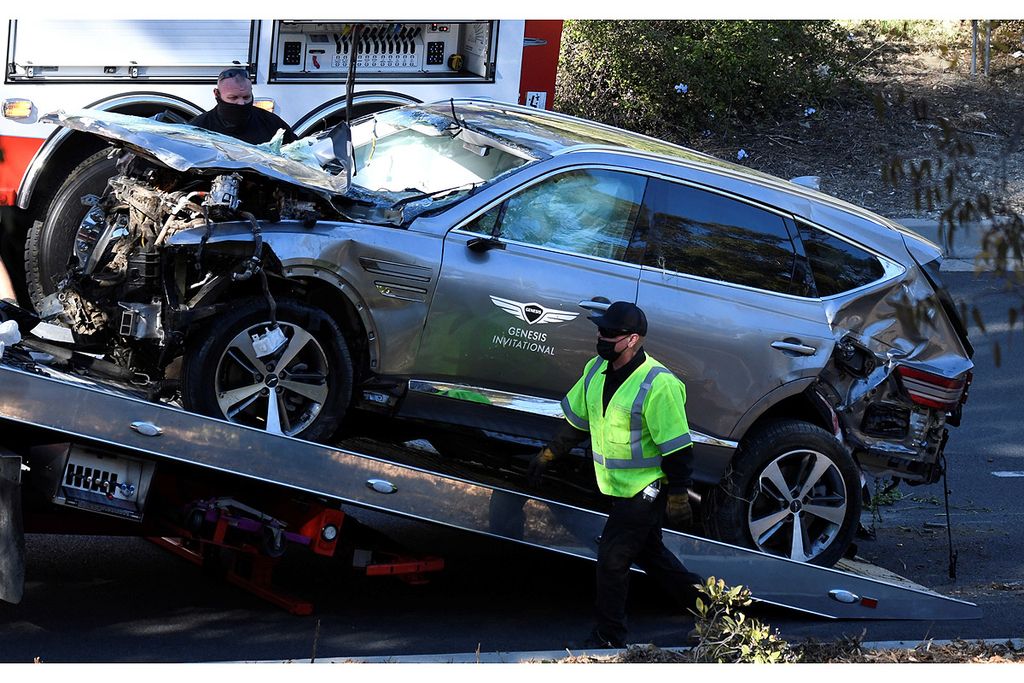 The Genesis GV80 driven by Tiger Woods, who was rushed to hospital after suffering multiple injuries, was pictured here being loaded onto a recovery truck after being involved in a single-vehicle accident in Los Angeles on Tuesday.

Law enforcement officials said the crash integrity of the vehicle — and Woods' use of a seat belt — may have saved his life.

The GV80 was a subject of intense focus during news coverage Tuesday, with news helicopters filming live as the vehicle was pulled from the roadside, lifted onto a tow truck, and carried through the streets of Los Angeles to a staging area where law enforcement investigators took photos.

Images and videos of the battered GV80, a new midsize model that arrived at dealers in December after a long delay due to the coronavirus, were plastered across social media. The front end was badly damaged, the windshield was broken, the hood was bent and the rear bumper came off.

Woods was driving a GV80 courtesy vehicle after serving as tournament host for the Genesis Invitational golf tourney at the Riviera Country Club in Pacific Palisades from Thursday to Sunday last week. A "Genesis Invitational" sticker with the Genesis brand logo were visible on the driver's door of the crashed vehicle.

Los Angeles County Sheriff Alex Villanueva said at a news conference that the GV80 rolled several times after leaving the roadway while going down a hill near suburban Rancho Palos Verdes on Tuesday morning.

Fortunately, Villanueva said, the passenger compartment of the GV80 was intact, the airbags deployed and the fact that Woods was wearing a seat belt could very well have saved him from more serious injuries or death. Woods suffered non-life threatening injuries, deputies said.

Sheriff's Deputy Carlos Gonzalez, the first officer on the scene of the crash, called the overall integrity of the GV80 "a marvel of modern automobiles" and said he had seen similar accidents over many years where the vehicles and passengers had not fared so well.

Gonzalez said during the news conference that the stretch of roadway where the crash occurred had been problematic for years because of the downhill slope. Officers had ticketed vehicles for going as fast as 80 miles per hour in the 45 mph zone, he said.

The cause of the accident was under investigation.

Genesis said in a statement to Automotive News that it wished Woods well as he recovered in the hospital.

"This morning, Genesis was saddened to learn that Tiger Woods had been in an accident in a GV80. Our thoughts and prayers are with Tiger and his family at this time," the statement said.

During the tournament, Genesis had posted photos on its Instagram account of Woods with the GV80. In one, Woods, Genesis Motor America CEO Mark Del Rosso and tournament winner Max Homa stand in front of a GV80 on display at the event.

Genesis said in its statement that it had worked with Woods over the last two years as he served as the tournament host. All of the players at the Genesis Invitational are offered the use of a Genesis vehicle during the tournament, along with select VIPs and the host.

News organizations reported that Woods was on his way to a photo shoot at a nearby golf course in Rolling Hills at the time of the crash.

--Laurence Iliff is a reporter for Automotive News