New Campaign From Cutwater Focuses on Actual Employees, Plus That Jolly Guy in the Red Suit
READ THIS NEXT
Hyundai and BTS launch campaign to boost environmentalism 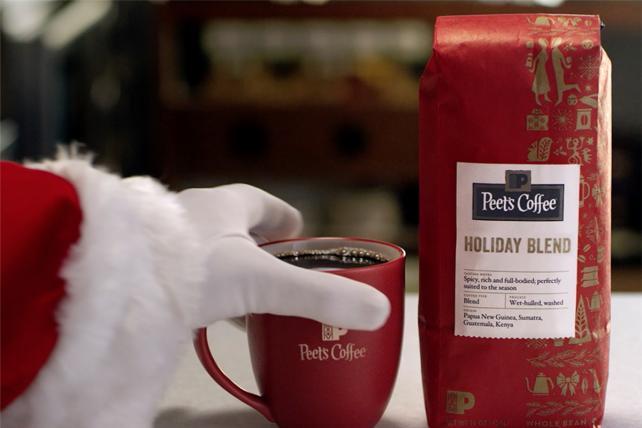 Peet's Coffee & Tea is paying tribute to its in-house experts and Santa Claus in new holiday work from Cutwater.

The San Francisco Bay area coffee brand, which has been growing on its own and expanding by buying smaller niche players, hired Cutwater as its agency of record this summer.

The "handcrafted holiday" advertising includes close-ups of actual Peet's employees inspecting beans, tasting coffee and preparing drinks like its Holiday Blend coffee and Cinnamon Hazelnut Latte. In some spots, Santa's hand appears to grab a cup. In 15-second spots, piles of beans morph into shapes resembling Santa's face, a reindeer or a penguin.

Peet's is spending about $1 million on media for this effort, which pales in comparison to larger coffee chains such as Starbucks or Dunkin' Donuts. But it is a big play for Peet's, which did media buys in the six figures for out of home, radio, digital and social elements when it expanded in markets such as Chicago and Washington, D.C. Swirl is its media agency.

As in past years, Peet's stores will raise money for various local charities or causes during the season, and reward patrons with a free cup of coffee on Dec. 24th.

The Christmas connections come amid chatter about how brands, especially coffee chains, do or do not use traditional elements of the holiday in products and campaigns.

Cutwater Principal and President Christian Hughes said he believes Peet's holiday push should have broad appeal. "We call it a holiday campaign. We haven't gone into any specific religions," he said. "It's celebrating holidays. I think that people love the holiday season."

After the holiday push, Peet's plans to focus marketing around its 50th anniversary in 2016.

"We believe we were the original craft coffee that tipped the industry and created the premium segment in America, the inertia that got it going," Mr. Ricks said.

"We'll be here to help or counsel where needed but my expectation is they will continue to operate very, very independently," Mr. Ricks said in early November, soon after the deals were announced. "Even though we've gained size and scale we still do things much the same way both of them do. We hand roast all of our beans, we roast in small batches, we have a group of experts who have been trained in the craft of artisan roasting."