Promotions such as free chicken nuggets take some of the pressure off when burgers are limited
READ THIS NEXT
DiGiorno bakes pizza ‘Pi’ Super Bowl stunt, and Etsy basks in glow of Bernie’s mittens: Trending 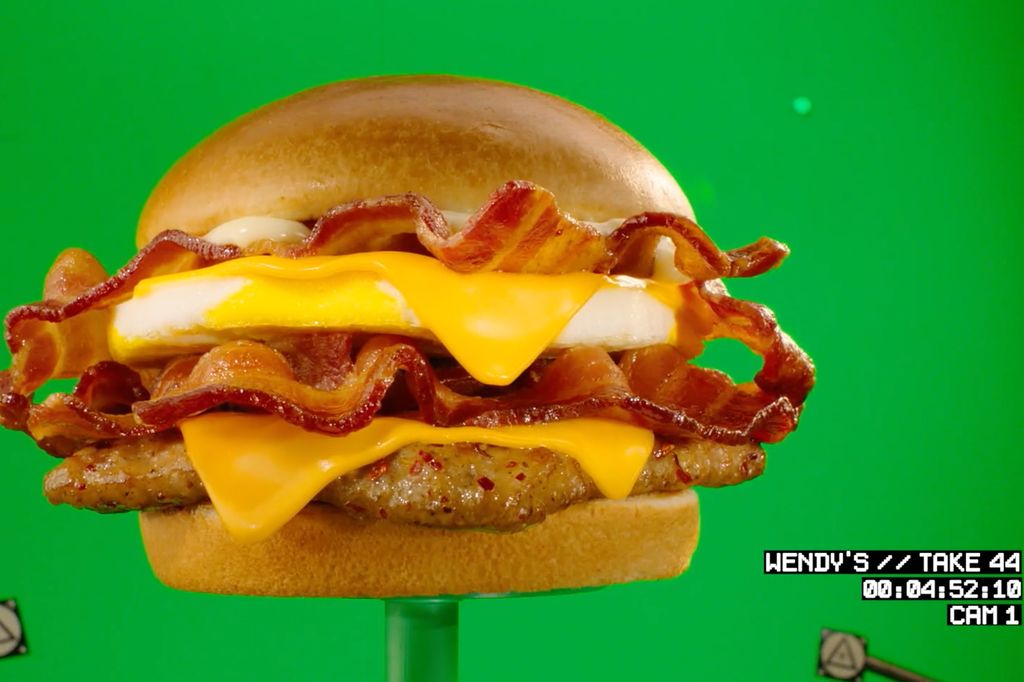 A Wendy's Breakfast Baconator spot features the sandwich in front of a green screen.

Wendy’s is emphasizing items such its bacon, egg, cheese and sausage breakfast sandwich in marketing as some locations are short on fresh beef due to COVID-19.

In a pandemic-induced twist of fate, the chain whose ’80s ads famously asked “Where’s the Beef?” in reference to competitors’ small burgers now has some of its own customers asking the same question. Wendy’s is running a bit short on the fresh beef used in all of its burgers due to the major disruptions in the U.S. meat supply chain stemming from slaughterhouse slowdowns and shutdowns as many of the workers in those facilities caught the coronavirus.

“Some of our menu items may be in short supply from time to time at some restaurants in this current environment,” CEO Todd Penegor said on Wendy’s first-quarter call on May 6. Later in the call, he said the supply “is tight out there today,” and that Wendy’s expects the issue to be resolved over the next couple of weeks.

Wendy’s is still selling burgers, but in some places there may be little to no supply as restaurants wait for their shipments.

Even President Donald Trump weighed in on the issue. Last week, he signed an executive order saying meat and poultry processors were essential operations and should remain open. And, on May 6, hours after Wendy’s discussion with analysts, Bloomberg reported that when asked about the supply concerns at Wendy’s, Trump said he would call the company’s chairman, Nelson Peltz, about the issue.

Wendy’s is currently showcasing other products in its marketing. A Breakfast Baconator spot that’s been running since mid-April features the sandwich in front of a green screen, a nod to the way ad shoots have been altered during the pandemic that even includes the word zoom, though without a “Zoom”-style call.

Burgers are also vanishing from some Wendy’s menus. Restaurant operators have the option to remove beef items from their online menus so that people cannot order them ahead of time, even if they may still be able to do so at the drive-thru. Separately, the company also simplified its menu, removing less-popular items such as side salads and wraps.

Cowen analyst Andrew Charles said his checks suggest that 15 percent to 20 percent of Wendy’s stores “have experienced some form of outage, with the peak impact this week, while some degree of outage likely persists through the end of May.”

For a week in late April, Wendy’s ran ads focused on its GroupNug promotion, which included giving free four-piece orders of its chicken nuggets to anyone in the drive-thru.

The focus on nuggets came after two weeks of ads featuring a Frosty with purchase offer.

Wendy’s had already acknowledged the beef supply issue in a May 5 statement, saying: “It is widely known that beef suppliers across North America are currently facing production challenges. We continue to supply hamburgers to all of our restaurants, with deliveries two or three times a week, which is consistent with normal delivery schedules. However, some of our menu items may be temporarily limited at some restaurants in this current environment. We’re working diligently to minimize the impact to our customers and restaurants, and continue to work with our supplier partners to monitor this closely.”

Still, other major chains such as McDonald’s—which only uses fresh beef in some of its products—have said in recent days that they aren’t experiencing such issues.

The issue didn’t slow down shares of Wendy’s, which shot up more than 7 percent on May 6 after the company's updates on topics including a strong start to its national breakfast menu, as well as delayed plans to enter the U.K. and to launch a plant-based product. Breakfast accounted for 8 percent of sales in April, Wendy’s said, even after it pulled back on incremental marketing spending.

Wendy’s also signaled improving results in the current second quarter. Its U.S. same-store sales were down about 2 percent in the week ended April 26, after falling 29 percent at the end of March. Also, digital orders now comprise about 5.5 percent of sales, up from 2.5 percent in 2019. Wendy’s also said it plans to introduce a loyalty program.