Hitting Brooklyn, L.A., Takashi Murakami carves out his own place along the brink of art and commerce.
READ THIS NEXT
10 latest creative trends in the time of coronavirus
Credit: Tadakazu Sasano

It was a scene to make counterfeit cops and Midwestern Moms twitch--a spectacular display of so-called limited edition Louis Vuitton bags strewn about vendor tables outside the Brooklyn Museum in New York. Turns out these babies--dolled up in the multicolored imprints created by Japanese artist Takashi Murakami--were not fakes, but the real thing. The stunt was all part of the institution's N.Y. spin on its launch of (c)Murakami, a retrospective of the artist's work that first opened last year at the Los Angeles Museum of Contemporary Art, curated by MOCA's Paul Schimmel.

The installation brought to the forefront the curious way in which Mr. Murakami rocks--and continues to shock--the worlds of fine art, fashion, pop culture and commerce. The 46-year-old artist, whom many have dubbed the "Japanese Warhol," has drawn both criticism and a huge fan base for his vibrant, fun-filled work, which pulls from influences as wide ranging as manga and anime, to traditional Japanese painting Nihon-ga, which Murakami studied in his twenties as a doctoral student at Tokyo National University of Fine Arts and Music. 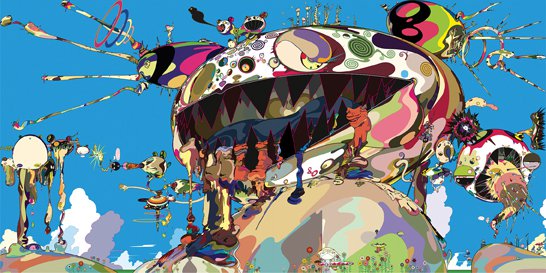 Depending on where you're coming from, it's quite easy to love--or despise--his smiley faced flowers, whimsical yet morbid characters like his Mickey Mouse-reminscent alter-ego Mr. DOB, Saturday-morning cartoon color palette and, of course, overtly sexual themes. At the recent Brooklyn exhibit, which closed in July, one of the first pieces museumgoers encountered was an elaborate sculptural presentation, "Second Mission Project Ko2 Advanced," a female cyborg who looks like she could be the love child of Optimus Prime and Sailor Moon--had she opted for the skin trade. The sculpture shows the partially naked robo-babe in various "formations," her privates unabashedly exposed and highlighted. Another striking piece is "My Lonesome Cowboy." The oversize spikey-haired anime-inspired man stands naked, his hand wrapped around his fully erect penis, which spews a lengthy stream of ejaculate that swirls around his head like a lasso. His counterpart on the opposite side of the room is an equally startling figure: a nude girl-woman whose titanic breasts squirt milk strings that she twirls with her hands as if jumping rope. 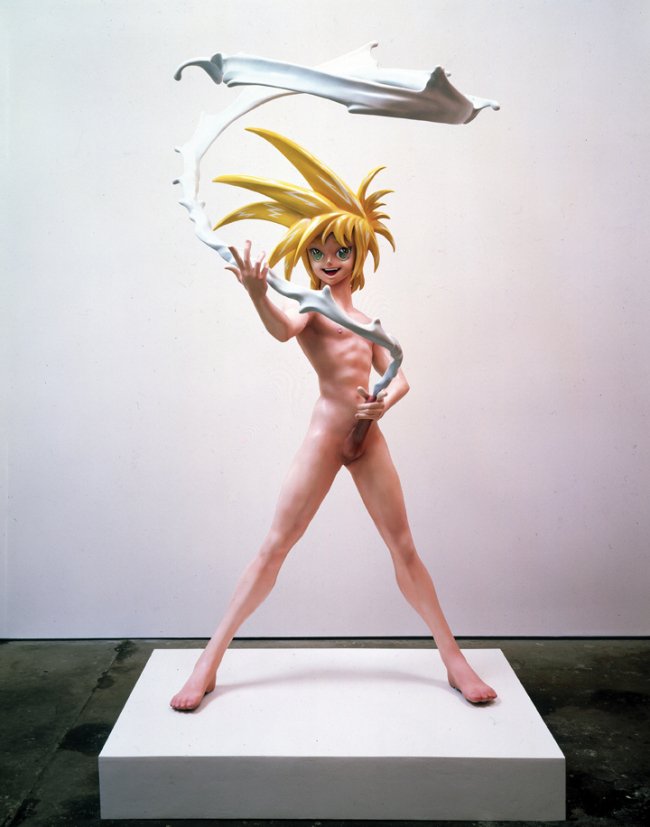 The work all falls within the bounds of Murakami's self-proclaimed "Superflat" art movement, which he first coined in the '90s. The term refers to the various ways in which fine art and pop culture have been flattened in Japanese society, as well as the "flat" artistic traditions apparent in classical Japanese works like Ukioe but also evident in the country's comics and cartoons. The Superflat philosophy also extends to Murakami's approach to the marketing of his work: art, promotion and business are all rolled into one. In 2001, Murakami established Kaikai Kiki Co., Ltd., a corporation dedicated to marketing his art and that of budding talents, many who have worked under him. The company also sponsors a yearly art show in Japan, Geisai, which can be likened to the annual Armory Show in New York City and is itself an attempt to "flatten" the Japanese art market by making it navigable and accessible to young talents and buyers.

Murakami's pieces increasingly have attracted the hoitiest of toitiest art collectors--"My Lonesome Cowboy" sold for a record $15.2 million at a Sotheby's Auction in May. "It's scary," Murakami says. "It surpassed my imagination." Yet the folks he says he's most concerned with pleasing are those who while away their time not in galleries, but in front of the computer or TV screen. "I'm targeting the sci-fi type people who enjoy Star Wars and Lost, small children who are crazy about the Powerpuff Girls and Hello Kitty," he says. "Those types of people have short attention spans, and are always seeking some kind of evolution in the world of artwork. I've sensed that need, discovered a theme and am working hard to make art." 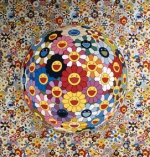 Although Murakami says that his inspirations include artists like Warhol and Jeff Koons who have blurred the bounds of art and commerce, his biggest detractors believe that Murakami himself has smudged those lines a little too much. New York magazine's Jerry Saltz criticized Murakami for failing to heed Warhol's belief that once art "becomes commercial for a mass market, it really stinks." That may have been Andy's take, but Murakami advocates say he's learned how to put a contemporary and democratic spin on embracing the artistic and commercial divide. While Warhol brought the lowbrow to the elite, it's widely observed, and praised, that Murakami brings his art to everyone--and on any sort of canvas on which he can apply his stamp. His handiwork can be seen both in the most elite arts institutions, and on the shelves of 7-Eleven, where Murakami-designed tchotchkes have been sold next to Pokemon's and Hello Kitty's.

Indeed, it's Murakami's growing stature in the world of commerce that makes him an especially curious talent. That couldn't be more clear than in his ongoing collaborations with the likes of Kanye West (he created an album cover and a music video for the rap artist) and, more significantly, with Marc Jacobs and Louis Vuitton. In 2002, LV creative director Jacobs approached Murakami to create a new monogram for the label's signature handbags. He went on to do just that, developing a new palette for the signature pattern but also creating an animated film to help promote the goods. The partnership eventually led to new seasons of handbag imprints and, more significantly, it took on a central role in Murakami's own oeuvre. When--Murakami opened in L.A. last year, it generated plenty of buzz for housing a fully functional Louis Vuitton boutique selling the artist-designed wares. The Brooklyn show followed suit, opening the first, albeit temporary, LV shop in the New York borough.

Despite the criticism, Murakami insists that the collaboration is just another expression of his Superflat sensibility. And, the true "art," he says, has yet to be revealed. "In order to enable this project to progress smoothly, there was a thick contract between Louis Vuitton and myself," he says. "In a way, this thick contract was like a concept sheet wherein everything about the future of art was written. The essence of the project isn't in the patterns and bags done through the collaboration, or the LV multicolored monograms and monogramouflage paintings, but the actual contract that we exchanged with [LV Chairman/CEO] Yves Carcelle," he says. "It can be said that the goal of this project is the day that contract goes up on the wall of a museum."