Rivals say that new plan shows ‘carrot and stick’ approach to getting advertisers into its Privacy Sandbox
READ THIS NEXT
Twitter analytics staff decimated by layoffs and resignations
Credit: Google

Google has a new roadmap to ditch internet cookies, but major players in the ad tech industry are worried that the largest internet advertiser's strategy works against their own plans for a post-cookie world. There are concerns that Google’s latest plan prioritizes its own privacy kingdom, while locking ad tech rivals out of crucial access to internet users for the purposes of personalized advertising.

There were clues in Google's updated privacy timeline, released last week, that it has more fleshed out plans to test its cookie-free internet ad ecosystem known as the "Privacy Sandbox," rewarding publishers and advertisers with early adoption, along with an experimental period that will run into 2023. However, Google plans to also penalize ad tech vendors that try to use workarounds to continue business as usual outside its Privacy Sandbox. Mathieu Roche, co-founder and CEO of ID5, an advertising technology and identity firm that works with publishers, says it looked like Google was deploying the “carrot and the stick."

“FLoC and FLEDGE are the carrot and the olive branch, where [brands and publishers] can continue to do some of the things that are very valuable,” Roche says. “Privacy Budget is the stick that will restrict the ability for everybody else to work with user-level data. So, in contrast, [Google’s] user-level data assets can be more valuable.”

The so-called Privacy Budget, set to rollout in 2023, represents one of the biggest potential disruptions to internet advertisers, except for Google, by preventing practices like “fingerprinting” and “cross-site tracking,” which are how publishers and ad tech partners gather behavioral data on readers of their websites. The companies developing their own cookie alternatives and internet IDs say that Google has a transparent timeline for its pet initiatives like FLoC and FLEDGE in Privacy Sandbox, while it is still fuzzy on details about how third-parties will be affected by the restrictions imposed by Privacy Budget. In many cases, the effectiveness of alternative IDs, the cookie replacements that are being developed, depend on tactics like "fingerprinting" and "cross-site" tracking that Google is looking to shut down.

Meanwhile, Google gave a clear roadmap for the two key parts of the initiative that could prove successful for advertisers and publishers, known as FLoC and FLEDGE, showing that it would open them to testing in the fourth quarter this year, with plans for a transition period that could run until late 2023 and beyond. FLoC stands for Federated Learning of Cohorts, which attempts to use the Chrome web browser to create large sets of people with shared interests, so they don’t have to be targeted through personally identifiable information. FLEDGE is a similar experiment, where publishers and ad tech partners create the targeting cohorts.

Google's tests have the potential to upend the entire internet advertising world, transitioning away from third-party tracking tools, which record every move a consumer makes online, and instead it relies on private anonymous data. The changes will affect all the publishers and vendors that have evolved over decades to deliver ads within Google's platform, and some vendors worry that their tactics of tracking will be ineffectual under the new rules.

All eyes are on Google as it tries to figure out how to erect a privacy-focused ad platform. Google’s Android software runs on 50% of devices in the U.S., according to a recent report from Consumer Research Intelligence Partners. Google’s Chrome web browser accounts for about 60% of internet users, and Google’s ad network serves 2 million websites and apps. Any changes to how those sites and apps can track consumers, whether through cookies or device IDs, will affect the publishers, brands and third-party ad tech vendors in Google’s ecosystem. Google generates the most internet advertising revenue in the world, notching $150 billion in 2020. 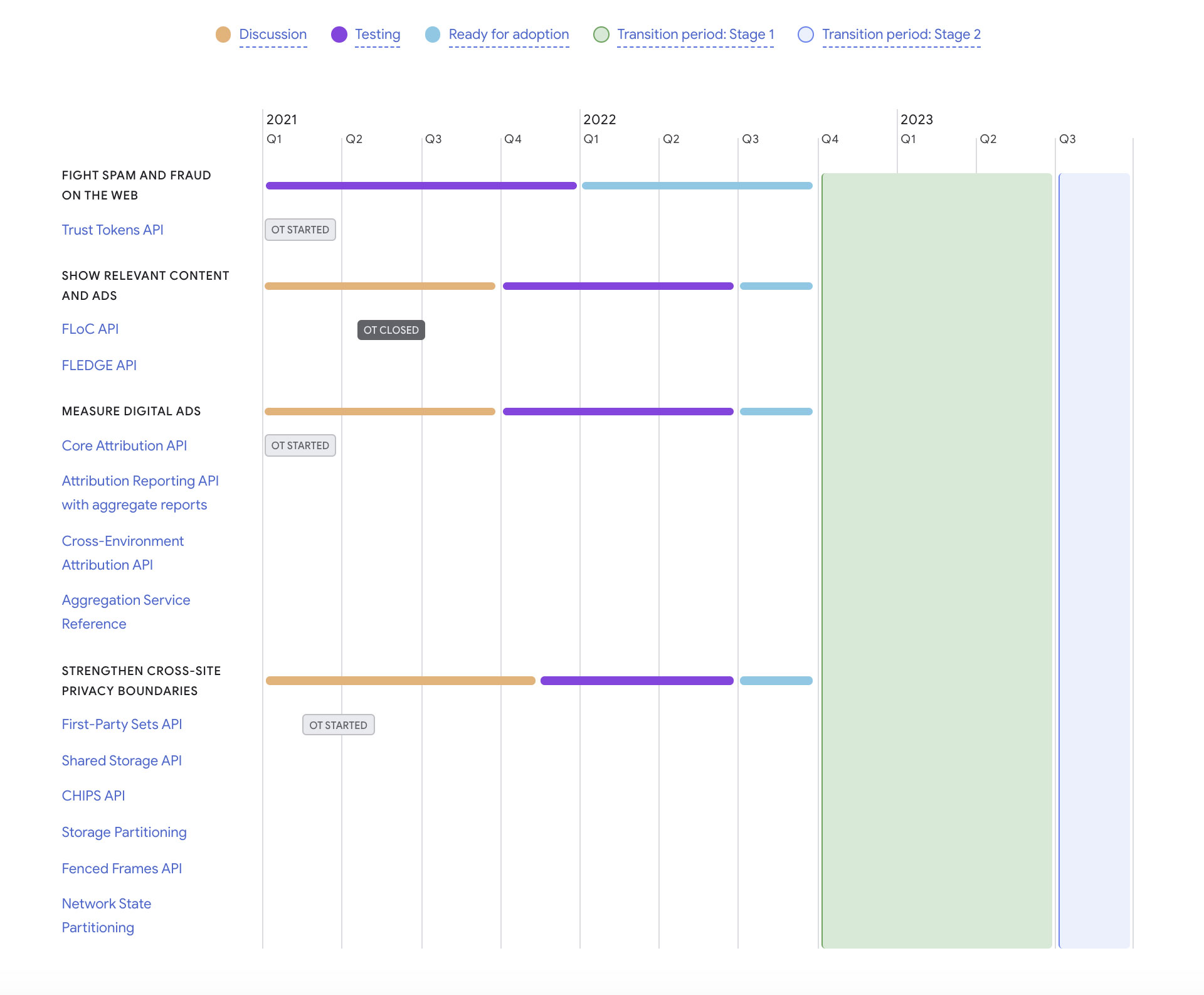 Companies like ID5, and dozens of others, are developing ID trackers that ideally preserve privacy while still enabling personalized advertising. Google has made it clear that it will not work with any third-party IDs that rely on personally identifiable information like email addresses. Some ID proposals rely on tracking.

“A lot of customers use these things for legitimate purposes,” says Mike Woosley, chief operating officer, Lotame, a data management platform. “And when you don’t have access to them, all of a sudden [Google] Chrome is much less interoperable with the rest of ad tech.”

Data and ID providers like ID5 and Lotame say they are proceeding with their plans to develop IDs despite Google, because they want to offer an alternative. “We don’t want to rely on Google for anything,” Woosley says.

A Google spokesperson said by email that Google will continue to update the timeline for changes, including with more details about the Privacy Budget. Google is trying to move the industry beyond the tactics like “fingerprinting,” which often involves surreptitiously building profiles on consumers based on how they navigate websites.

“By providing privacy-preserving technology, we as an industry can help ensure that cookies are not replaced with alternative forms of individual tracking, and discourage the rise of covert approaches like fingerprinting,” Google’s spokesperson said.

To be fair, a number of partners are experimenting alongside Google to see if its new ad systems can be effective and to test the Privacy Sandbox over the next couple years before it rolls out as a finished product.

RTB House is an ad tech firm in Poland that specializes in programmatic advertising and it has been part of Google’s first tests. Lukasz Wlodarczyk, RTB House’s director of global inventory partnerships, says the tests showed it was possible to power ad campaigns for 500 advertisers without losing the efficiency of the ads. “The whole concept improves significantly privacy guarantees for the consumers,” Wlodarczyk says. “And it makes the whole process way more transparent.”

For Google rivals, one of the fears is that Google’s products will be given the priority and the time to work, making it easier for publishers and brands to just stay in its sandbox rather than try their alternatives. “You will have a world driven by Privacy Sandbox initiatives,” ID5’s Roche says, “and you will have the rest of the world, which will be using IDs to create a more independent, more autonomous way of identifying users for advertising purposes.”

How brands are using sonic branding beyond ads