MikMak, which has the lofty goal of convincing millennials to binge-watch ads, is teaming up with GE, Oxygen Media, Mondelez and American Express to create branded "minimercials," which are short, shoppable infomercials.

The new feature is called "Blank Presents." Each brand will sponsor a different series in the app. Eliot Glazer from Comedy Central's "Broad City," for example, hosts "Conversations Over Dim Sum", where he interviews creative people and promotes two lightbulb models, LED Bright Stik and Link, a smartphone connected lightbulb. 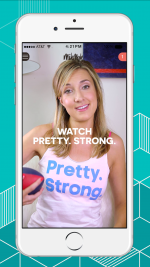 MikMak has received $2.2 million in seed funding from VaynerRSE, UTA Ventures, Slow Ventures, CNN's Jeff Zucker and Google's Ivy Ross. While declining to disclose sales and viewership numbers, MikMak's CEO and founder Rachel Tipograph says that over 750 minimercials have been produced so far, and each user spends up to 36 minutes in the app watching the videos. MikMak also uses flash promotions and prizes to encourage purchases.

But according to GE's Chief Marketing Officer Linda Boff, the increase in sales is just a bonus. "We saw some interesting opportunities in this SNL-meets-Home-Shopping-Network approach," she says. "This is less about how many bulbs we are going to sell and more about sending the message to a group of people who are not going to a traditional home store to buy lightbulbs."

For Oxygen, it's also about going where the viewers are. "We are always looking for innovative and entertaining ways to connect with our tech-savvy fans on the platforms they naturally gravitate to," said Lisa Hsia, exec vp-digital at Bravo and Oxygen Media.

Next month, another two new companies will sponsor series in "Blank Presents." American Express will use the platform to promote the "Shop Small" campaign, while Mondelez will use Mik Mak to promote and sell a special edition of Swedish Fish candy.