Adoption of Facebook Ads and Perceived ROI Increases
READ THIS NEXT
TikTok tactics: What to know about reaching audiences on the social media platform

In 15 months, Facebook changed from an experimental channel where marketers were reluctant to invest deeply to a mature part of the mix where they're continuing to increase spending. That was the consensus of 1,200 Ad Age subscribers polled in a survey done in conjunction with RBC Capital Markets in August -- the third such study since June 2012, just prior to Facebook's IPO.

The percentage of respondents that said they use Facebook as a marketing channel has consistently been higher than 80%. That includes maintaining a Facebook presence, creating content and social listening in addition to advertising. But the number who say they advertise on Facebook has sharply increased since 15 months ago.

About 74% of respondents said their Facebook budgets now include outlays on Facebook ads; that has steadily increased from 62% in January 2012 and 54% in June 2012. The latest poll included respondents that identified themselves 26% as marketers or clients, 30% as ad agency employees, and the remainder as media company employees or consultants. The full results of all three surveys are available in Ad Age DataCenter.) 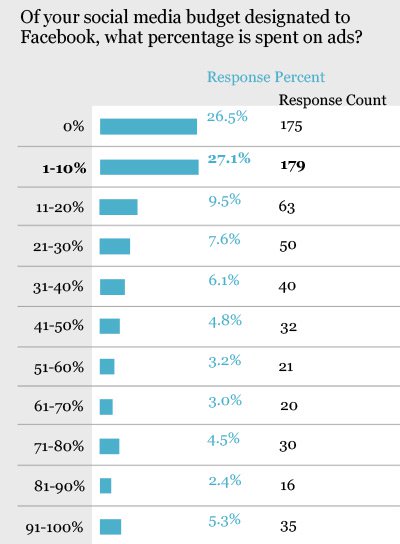 That uptick in the percentage of marketers who are actually buying ads is a clear indicator of additional ad revenue coming Facebook's way, according to RBC Capital analyst Mark Mahaney.

"These marketers also observe that their ROI on FB has improved over the last 6 months, which may be a sign that the increase in advertising activity is sustainable," he wrote in a summary of the findings.

Mr. Mahaney is referring to the finding that 43% of respondents reported that their ROI on Facebook had "dramatically" or "somewhat" improved during the last six months. (About 48% said it hadn't changed, and 9% said it had deteriorated.) And when asked to rank six online advertising sites in order of importance, Facebook ranked a close second to Google.

Fifteen months has also made a crucial difference for Facebook and its resurgent stock price because of its mobile ad offering, which was nascent in June 2012. Mobile is now the main accelerant of Facebook's revenue growth -- with 41% of the company's ad revenue coming from advertising on mobile news feeds in the second quarter.

Interestingly, a plurality of respondents -- 38% -- reported that ROI of Facebook's mobile and desktop ads were "about the same." (Thirty-five percent favored mobile's performance, while 27% picked desktop's.)

Budgets to increase
Perhaps most significantly, 56% of respondents outright said that they expected their Facebook ad budgets to increase over the next year, which is consistent with the previous surveys. And a small portion -- 18% -- is using the Facebook Exchange, which has been in market for about a year. That's consistent with chief operating officer Sheryl Sandberg's assertion that FBX constitutes a small portion of Facebook's overall ad revenue during its most recent earnings call.

Lastly, in a finding that may spook agencies, 64% of respondents reported that they buy their Facebook ads directly from the social network. This is a testament to Facebook's self-serve capabilities but also a sign that this growing area of marketing is happening outside of traditional ad agency structures.

The rest of the respondents said they buy through an ad agency or an ad-tech vendor -- 22% and 14% respectively. An important caveat, however, is that 41% of respondents have marketing budgets under $500,000, so probably don't have the resources to hire an agency.