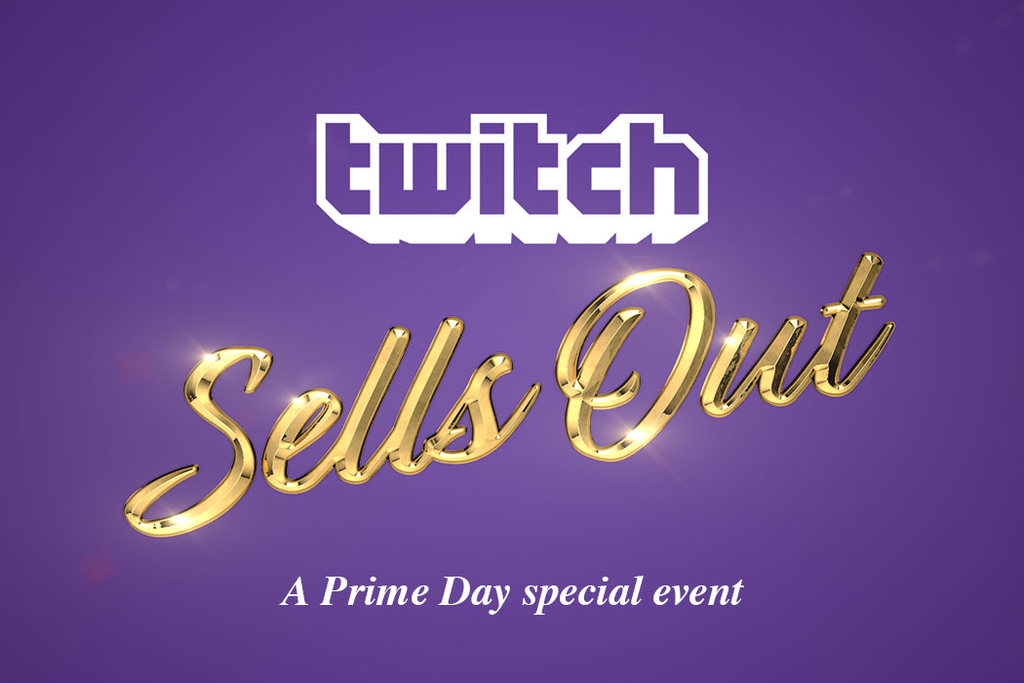 Amazon plans to "liven" up Prime Day on July 15 by encouraging brands to take advantage of new streaming opportunities on Amazon and Twitch that it hopes will boost sales even further during the made-up commercial holiday.

On Friday, Twitch, which is owned by Amazon, announced it was ready to “sell out” for Prime Day, by opening its most popular live-stream channels to home-shopping-style programming. The idea of “selling out” to its new corporate master was intentionally worded for the cross-over event as a way to fess up to the blatant commercialization.

“Twitch is hosting our very own live shopping show on /twitchpresents that promises to be unlike anything you’ve ever witnessed, but, like, in a good way,” the streaming service said in a blog post on Friday. “It’s called ‘Twitch Sells Out: A Prime Day Special Event.’”

Twitch says that for two days dozens of its streamers will hawk everything from gamer gear to kitchen goods. Twitch, of course, is just one part of a much broader live push from its parent company.

Earlier this month, Amazon sent e-mails to ad agencies promoting Amazon Live, an app that enables advertisers to stream live video direct to the site, including to their own branded stores.

“Amazon is pushing brands that have deals on Prime Day to be live-streaming when the deals are actually up,” says Will Margaritis, SVP of e-commerce at Sellwin Consulting, an Amazon-focused agency within Dentsu Aegis Network. “They just want to keep an audience there longer, watching for 10 minutes, 20 minutes, and therefore adding more [merchandise] to their carts.”

The Amazon Live app launched in February, creating a portal on the e-commerce site where sellers could stream videos about their products, but so far it’s mostly been used by independent sellers with low production values. Advertisers say that Amazon is trying to increase the prestige of the live-shopping format with bigger-name brands.

Amazon says that Prime Day, now in its fifth year, reaches 100 million paying customers. The big winner is always Amazon, with its own products—like Alexa-voiced Echo devices and Fire TV sticks—typically being among the biggest-selling items. Brands have learned to jump into the fray, preparing their own deals and increasing their advertising on Amazon to generate sales. Prime has become such a fixture of summer that rival retailers like Target and Walmart also prepare promotions at the same time in a bid to syphon shoppers.

Margaritis says that some brands he advises are planning for about 30 percent higher sales on Amazon.

Amazon has been focusing on building a more-connected ad platform over the past two years so that brands can promote their stores and product pages across the internet. Amazon gives brands the opportunity to buy search terms for their products to increase their visibility on the site; and offers display and video ads that run on other sites across the internet, similar to Google and Facebook ad networks.

Last year, Amazon reported more than $10 billion in revenue from the portion of its business that includes advertising sales, and became the third-largest ad seller in the U.S.

Live video has been an area of interest to the company for some time, but it hasn’t always been successful. In 2017, Amazon cancelled Style Code, a live fashion-based home-shopping program, although it now has a daily deals show that promotes a variety of product categories via a cast of home-shopping hosts. When sellers create their own shopping programs through the live streaming app, the videos appear under Amazon’s deals show.

Margaritis says advertisers could use the live streams as a way to break out from rival sellers.

“Who is going to be first brand to come up with a live stream on Amazon that goes viral, just for being weird or being out there?” Margaritis asks. “The real goal for Amazon is to have a lot of these going [on] concurrently and [to] just see if anything interesting gets going.”