Artist Ai Weiwei is suing Volkswagen because of an ad: Thursday Wake-Up Call

The car brand put Ai's art in an ad, and he wasn't happy about it
READ THIS NEXT
The 10 best Instagram analytics tools for 2021 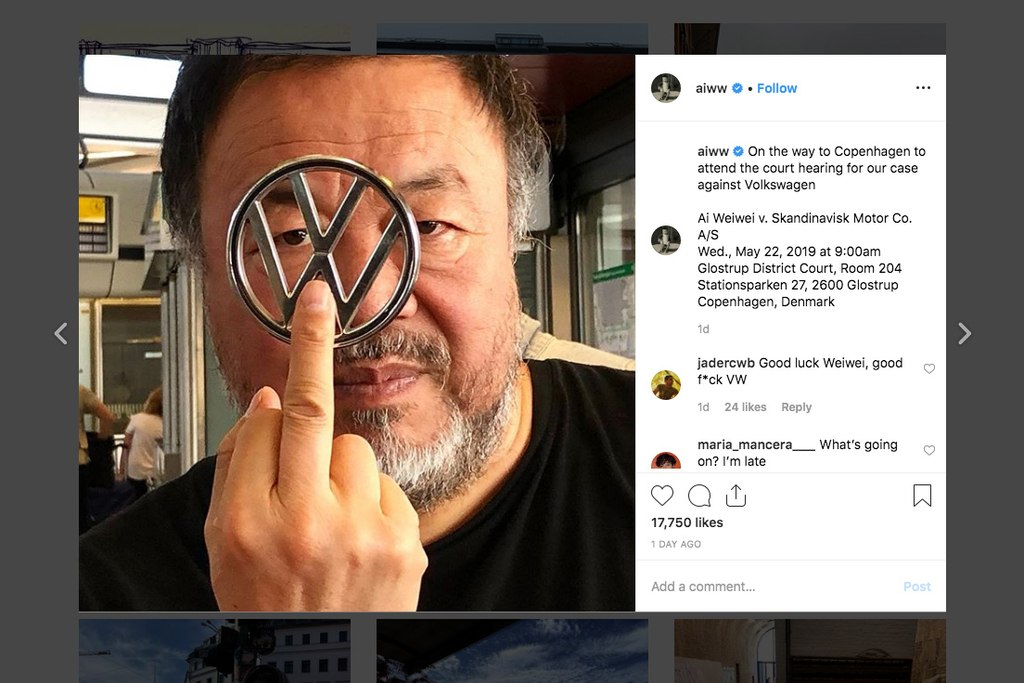 What people are talking about today
Ai Weiwei is suing Volkswagen, and to show just how he feels about the car company, the Chinese artist posted a photo on Instagram: It shows him giving Volkswagen the finger.

Ai, who took his case to court in Denmark, wrote in The Guardian that the automaker used his art as the backdrop for a car ad without his approval. The art installation in question included 3,500 life jackets used by refugees, and it was set up on the facade of Kunsthal Charlottenborg gallery in Copenhagen, Denmark.

Ai wrote in The Guardian: “The advertisement gives the false impression that I have given permission for my work about refugees to sell Volkswagen’s cars. This misrepresentation severely damages my artistic reputation and a lifetime of work defending human rights.”

A hearing was held Wednesday at Glostrup District Court in Copenhagen, CNN.com reports. A spokesman for Volkswagen Denmark told CNN that the automaker had tried to reach a resolution with Ai for a year before the case went to court.

This is just the latest example of artists fighting back when advertisers put their work in ads; Adrianne Pasquarelli wrote last year of a street artist’s tussle with H&M. And Anish Kapoor filed a copyright infringement suit when his sculpture turned up in a video from the National Rifle Association.

Before and after
Google search results are getting a new look, starting on mobile. The company released a blog post showing a before-and-after. Search results will put more emphasis on websites’ and publishers’ branding, so it’s easier to tell at a glance where information is coming from.

The design also alters the way search ads look. Instead of “ad” being written in green with a box around it, the word “ad” is now in bold black type, and it’s in a different place.

So is it easier or harder now to tell if something is an ad? On social media, many commenters say ads look much more similar to ordinary search results. As one digital strategist tweeted: "Ads have completed the journey to become totally indistinguishable from Organic."

But anyway, have a look and judge for yourself.

The use of artificial intelligence is growing among marketers, though many are disappointed by the results. In a new study from Forrester in partnership with AI marketing platform Albert, Forrester surveyed 156 U.S. marketers at brands and found that 88 percent have now incorporated AI into their marketing, for tasks such as deciding which ads should be served to which consumers. That's way up from 43 percent in 2016.

But the report also found that half of marketers surveyed are underwhelmed by the results. One possible reason: About three quarters of marketers are still using AI in a merely assistive fashion, for example to pull up insights for humans to consider when making decisions. Forrester argues they could be using it in a more transformative way.  “Automating some of the manual work is useful, but it sells AI’s capability short,” says Joe Stanhope, VP and principal analyst at Forrester.

What’s in a name: Urban Outfitters has a new apparel-renting service, and it’s called Nuuly. Read more about the service (and the rather complicated thinking that led to the name Nuuly) in the Ad Age Marketer’s Brief.

Something to watch: “Google’s lead regulator in the European Union, Ireland’s Data Protection Commissioner, opened its first investigation into the U.S. internet giant on Wednesday over how it handles personal data for the purpose of advertising,” Reuters reports.

Ad of the day: Fortnite, the video game, is a cultural phenomenon with about 250 million registered players. And Nike just made a clever move to get its shoes in front of their eyeballs: New characters sport classic sneakers from Nike’s Jordan brand. Even better: People will pay up to $18 to unlock them. Read more from Bloomberg News.