Facebook Users Call It 'Dumb' and 'Meaningless' in German Ads

As Facebook comes under fire in the U.S. for the fake news and partisan sources that dominated news feeds during the presidential election campaign, the social network's German division is freely admitting that much of what users see can be "dumb" and "meaningless."

The social media giant's new German advertising campaign sounds more like chatter you might expect to hear around the dinner table -- but never in an actual Facebook ad.

The integrated campaign is based on hundreds of self-shot video submissions by users solicited by Facebook, which will be shown on TV as well as on Facebook. Hundreds of Germans responded to Facebook's request for feedback, and they didn't hold back. Here are some samples: "The thing that bothers me about Facebook is all the dumb news" and, "This wave of information that you get through Facebook is usually totally meaningless."

The responses were stitched into the "Make Facebook Your Facebook" campaign by Wieden & Kennedy Amsterdam, which addresses and answers these concerns by owning up to the social network's weaknesses and showing that it's possible to have a better experience.

One spot features users complaining about friend requests "From weirdos who I don't even know… and probably don't ever want to meet" and responds with a demonstration of how to find and use privacy shortcuts. 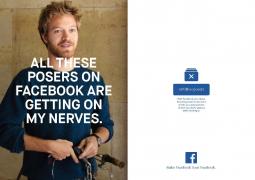 Another addresses the objection, "Facebook. It's kind of absurd somehow. There are just too many videos that no one cares about," by showing how to hide posts. Yet another features users complaining, "I don't like those people who just post nonsense all the time. All the time! What they eat, what they did, where they've been," before showing how to unfollow people in Facebook.

The print and out of home executions are just as acerbic, including one that says, "All these posers on Facebook are getting on my nerves."

Facebook has been slower to take off in Germany than in many other countries, thanks mostly to the country's obsession with privacy. It's normal for Germans to use a pseudonym on Facebook in order to shield their real identities.

"Our culture of innovation and change is rooted in listening and learning from the people using our platform," said Tina Kulow, Facebook's director-corporate communications for Northern, Central and Eastern Europe in a statement. "In Germany, it's important for us to reach out and open up the conversation directly with Germans, to hear about what's on their minds when it comes to Facebook... By being more transparent in addressing their questions and concerns by featuring clear solutions, we want Germans to know that we are taking their feedback seriously."

Wieden & Kennedy Amsterdam creative director Daniel Schaefer said in a statement, "We knew straight from the beginning that we had to be very thoughtful how we portray people's opinions about Facebook. That's why we chose to ask Germans all across the country to record the footage themselves. That way we could ensure to capture people's feelings towards Facebook as unfiltered and as authentic as possible."