Ad Choices Icons Pop up Across the Web But Don't Appear on No. 1 Publisher of Display Ads
READ THIS NEXT
Google used 'jedi mind trick' to beat header bidding, unsealed court documents allege

Can you have industry self-regulation if one of the biggest players isn't following the guidelines?

That's the challenge for online advertising in the face of mounting privacy concerns, and the source is one of the web's biggest ad sellers: Facebook.

The social-media giant is running behaviorally targeted ads on its site that don't include the little triangular icons that are the public face of the industry's push to be more transparent about targeting.

The so-called Ad Options icon was created by the Digital Advertising Alliance, a consortium of ad trade groups, in part to prove to the government that the industry could be proactive about giving consumers information about the kind of data that advertisers and ad-related firms are collecting to tailor and target ad messages. But without the involvement of Facebook -- by far the No. 1 publisher of display ads in the U.S. -- the self-regulatory program will continue to sport a gaping hole.

"Facebook's failure to participate in self-regulation makes the entire initiative very easy to criticize," said Jim Brock, founder of PrivacyChoice, a provider of privacy data and tools. "Lots of folks on Capitol Hill love beating up on Facebook, because Facebook has inspired privacy fear in a lot of users. They do not do the program a favor by stepping outside of it."

Facebook declined to make an executive available for interview, but issued a statement: "Facebook is a strong supporter of transparency and control in the online ecosystem, and we are participating in discussions with many stakeholders, including through the DAA and the U.S. Department of Commerce, about how we as an industry can best empower users to understand and make choices about the ads they see."

Users can generally opt out through the DAA's icon in two or three steps, but on Facebook, they might need to take at least four actions to opt out of behavioral targeting: hover over an ad so a small "x" appears in corner; click on the "x"; click on the "About this ad" tab; and then opt out if the ad-buying company's page they are taken to offers the option. 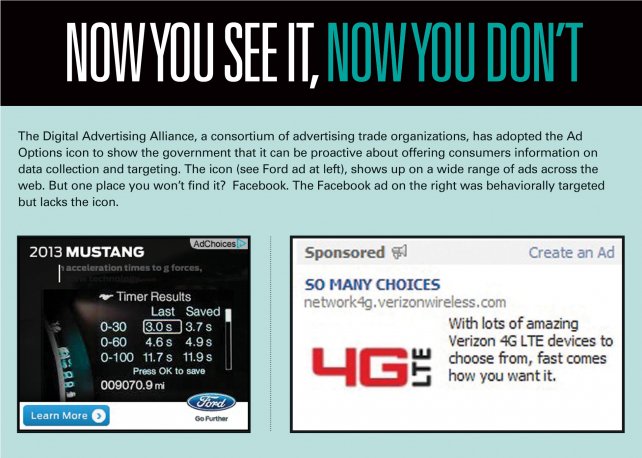 The DAA's icon program isn't perfect, but it has the broadest industry consensus and gives a consistent signal to web users.

"Any ad campaigns that would fall under the auspices of our program should contain the Ad Options icon, whether on Facebook pages or elsewhere on the web," DAA chief Lou Mastria said in a statement.

Facebook's decision to carve out its own privacy path has become a greater topic of conversation since the launch of its ad exchange this summer. The exchange lets marketing firms buy Facebook ads for advertisers through real-time auctions and use information about a user's browsing habits elsewhere on the web to customize those ads appearing on the social network.

More than a dozen ad-buying companies use the Facebook exchange, including several that subscribe to DAA principles, such as Criteo, Turn, AdRoll and AppNexus. Criteo declined to comment, and AppNexus referred questions to Facebook. Turn and AdRoll execs argued that Facebook's notification and opt-out mechanisms accomplish similar goals to the AdChoices program.

At this point, it is unclear whether these companies, the advertisers they represent or Facebook will come under scrutiny from the industry body that 's policing behavioral advertising and enforcing proper consumer notification. "We never discuss whether or not we are engaged in a particular inquiry or set of inquiries," said Genie Barton, VP-director of the Online Interest-Based Advertising Accountability Program.