Facebook's TikTok clone already has some early users ... not teens, but some major marketers
READ THIS NEXT
Brand safety report reveals the dangers for advertisers on platforms like Facebook and YouTube 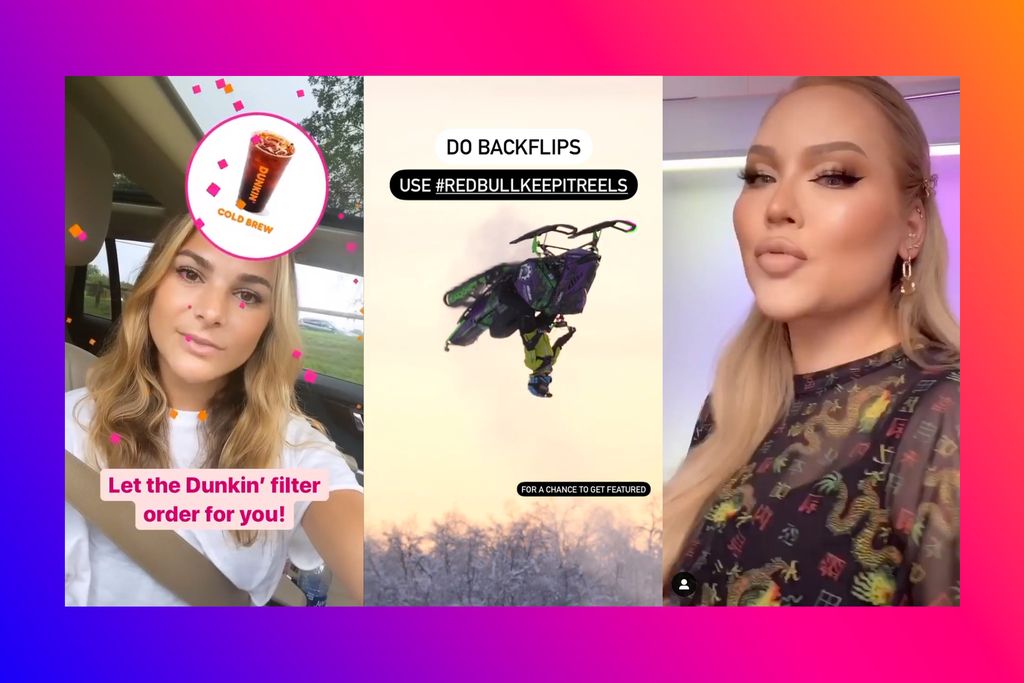 Famous TikTok talent Charli D’Amelio might not be a convert to Instagram Reels yet, but one of her favorite brands, Dunkin, is already there.

That’s right, Dunkin posted to Instagram Reels, and so did Maybelline, Red Bull, Louis Vuitton and Sephora. D’Amelio, the 16-year-old who rose to prominence on TikTok—but has since branched out to YouTube, Snapchat and Instagram—is known for her love of Dunkin coffee. She hasn’t officially embraced Reels, which launched last week on Instagram, but brands and other internet stars are alreadytesting the waters.

Facebook-owned Instagram wants to create the next hot social media craze with Reels, drawing on the interest in TikTok, the Chinese-owned app that is in trouble in the U.S. The key to Reels’ success is how well it caters to young talent, and the brands that keep those creators in business. Brands aren’t necessarily the target demo, but they can’t resist the allure of a new video service that claims to appeal to young consumers.

Related articles
What happens if Microsoft buys TikTok, and where brands go if the app is banned in the U.S.
Garett Sloane
Opinion: The TikTok copycat wars are underway, but which app is winning?
Mike Proulx
Instagram launches TikTok copycat feature called Reels

“We’ve seen an explosion of Gen Z on TikTok, and now millennials and Gen X are getting more involved in TikTok, too,” says Grace Hoy, social strategy supervisor at agency VMLY&R. “So obviously there’s this huge interest in this informal, short, not-too stylized video. So brands have been interested in Reels, too.”

On Thursday, Dunkin posted its video that promoted its drive-thu service and cold brew coffee. Dunkin’s Reels video used all the tricks available—filters, stickers and original Dunkin music. (One of the attractions of TikTok, and now Reels, is that there is a musical component. And while there are some kinks to work out over music rights for pop songs on Reels, brands can use their own jingles.)

👋 Instagram reels. Coming at ya with a filter for your next Dunkin’ run. Search “you hungry?” And try it out!

For instance, Maybelline’s Reels video starred the influencer and model Nikkie De Jager, who goes by NikkieTutorials on Insta. She lip-synced Maybelline’s catchphrase while she applied make-up and video-editing magic: Maybe she’s born with it, maybe it’s Maybelline.

This is the allure of Reels. It’s a copy of TikTok, an app that is surging in popularity in the U.S under the Chinese ownership of a company called ByteDance. Reels wants to capture the same internet behavior that TikTok popularized among American teens; the dancing and lip-syncing. Music is part of the appeal.

“Audio is a huge part of the whole experience,” says Meghan Rao, account director at the ad agency HYFN, a part of Nexstar Digital. “Especially with TikTok, people lip-sync to parts of movies or songs, and brands can also do that.”

While brands play around with Reels, TikTok is in the middle of an international incident. Trump wants the app banned, claiming it poses a national security threat by giving the Chinese government unfettered access to U.S. consumers and their data. There also have been conspiracy theories that Facebook wants TikTok taken out so it can take its place as the go-to app for dance-crazed teens. There is little to back that up, and Facebook CEO Mark Zuckerberg has said that banning TikTok would not benefit his company because it would open the social network to similar punishments in countries outside the U.S. An adversarial climate is not good for business.

Still, that doesn’t mean that Facebook isn’t trying to capitalize on TikTok’s recent misfortune. Reels is just one in a long line of products Facebook has copied from younger rivals. Facebook famously copied Stories, the video clips that disappear in 24 hours, from Snapchat. It also adopted Snapchat’s augmented reality filters. Most recently, in April, Facebook launched a rival to Zoom, the videoconferencing app that has seen a surge in usage while people are quarantined during the COVID-19 pandemic.

Reels has appealed to top Hollywood stars and it launched with videos from top celebs like Will Smith and Selena Gomez. Instagram is putting as much behind this launch as it did Stories, the Snapchat video format, because it sees a new behavior that has proved contagious among kids.

“Instagram is starting to adopt a feature that has worked so well on TikTok, and it’s integrating it into the core experience of the app,” says Adam Boorstin, chief operating officer at Studio71, a digital media company that works with some of the top creators on social platforms.

The question is will Instagram Reels succeed like Stories, which have become a widely used video option, or will it take time to get used to like IGTV, Instagram’s video service that is more like YouTube. IGTV is Instagram’s longer-form video service, which has been slower to take off.

Instagram gave Reels a high-profile position right inside the app for everyone to see. “Some people argue and complain that Reels is in your face and it is annoying,” says John Shahidi, CEO of Shots, an influencer management and technology platform. “But I think it’s a great move because Instagram put Stories in your face when it first launched and Stories became a success. They didn’t put IGTV in your face at first, and it took IGTV a while to take off. So I think if you’re going to do it, do it.”

Shots works with talent like Lele Pons and Hannah Stocking, who have been dabbling in Reels content.

There is a talent war popping off between the platforms. Instagram has been contacting web celebrities—some of them TikTok stars—to entice them with payments and other incentives to shoot videos. Shahidi declined to comment on whether Pons and Stocking were being paid to contribute to Reels, but it’s known that Instagram is willing to pay video makers.

TikTok has said it is prepared to spend at least $1 billion over the next three years to support its creators. That is if TikTok can last, because Trump has vowed to shut down the app if it does not find a new owner by Sept. 15. Microsoft has emerged as the suitor most likely to acquire it and keep it in business.

“I still see brands on TikTok and I expect that to continue,” VMLY&R’s Hoy says. “It’s such a valuable platform in terms of the user base and the time spent on the platform.”

TikTok has that “it” factor, which will be hard for Instagram to mimic, most marketers say. But it doesn’t have to compete with TikTok on those grounds. TikTok has that cool cache, but Instagram is a known quantity.

The users and brands have audiences on Instagram, whereas there are marketers that stayed away from TikTok even before it was a target of the U.S. government. TikTok’s Chinese ownership has been a deterrent for risk-averse brands.

“If you’re a brand, it’s easier to get internal buy-in at your company or leadership on board with Reels,” Hoy says. “Because it’s not about explaining and justifying a new platform. It’s taking what you already have and building on it.”