Startup Raises $3 Million Seed Round As It Peddles Its Tech to Big Retailers
READ THIS NEXT
Borat makes Amazon debut, and a Quibi postmortem: Friday Wake-Up Call

You walk into a store and not only does the retailer know you're there, it's tracking the time you spent, which departments you browsed and what displays caused you to stop and linger.

That's the promise of retail-tracking startup Nomi, which has scored $3 million in seed funding as it develops technology to monitor the activity of shoppers through their mobile phones.

Nomi's technology gathers mobile-device IDs as people enter merchant locations through the merchant's WiFi network or via small sensors that track a mobile device's radio signals down to a one- to three-meter proximity. Nomi then uses machine learning to identify spatial relationships by crunching data on consumer footpaths.

The system is already tracking such information at stores in New York City, such as teensy cupcake purveyor Baked By Melissa or modern-furniture merchant BoConcept. 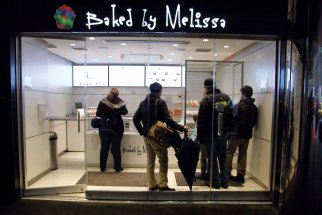 Baked By Melissa uses Nomi data to run A/B tests on its window displays, where it promotes bite-size cupcake flavors such as Chocolate Graham and Pink Velvet. The idea is to determine which displays result in higher window-conversion rates.

Quick-serve salad restaurant Sweetgreen is using Nomi to track how long it takes customers' orders to arrive. "Time spent in-store vs. the number of seats is a very interesting metric," said Jonathan Neman, founder and CEO of Sweetgreen, which has been using Nomi for nearly five months and has begun implementing it in all 16 of its Mid-Atlantic stores.

New York-based Nomi is still small—its team numbers 15—but it's focused on attracting large national chains and building staff to develop an upcoming offering that will tie consumer interactions in bricks-and-mortar locations to e-commerce, loyalty-card information and other data.

And the privacy implications? While the company stresses the unique device IDs it tracks are never tied to personally identifiable information, the system operates with little—if any—notification to consumers. There's no notification on consumers' phones that the tracking is occurring; rather, they are automatically opted in to being tracked. Stores can post notice, which Mr. Neman is considering for Sweetgreen.

Nomi competes with a handful of firms using a variety of technologies to track people in-store, including RetailNext, which tracks consumer movement via data derived through video cameras, WiFi devices and other sources. Another mobile device tracking firm, Path Intelligence, attracted the ire of Senator Chuck Schumer of New York when it was deployed at malls in 2011. Mr. Schumer sent a letter to the tracking firm suggesting it should require consent from device owners before tracking them. Malls in the U.S. that had tried the technology reportedly ceased using it as a result.

The company is working on an opt-in only system called Engage that will allow consumers to identify themselves in exchange for deals. "It will give you the entire closed-loop experience," said Mr. Ferrentino, connecting digital interactions "with the footpath in the physical world."

The company is exploring how to help clients measure the impact of daily deals offerings through services such as Groupon and Living Social. It would track upticks in store traffic from new mobile devices and, more important, whether the same device is tracked in the location again. In other words, did the offer merely bring an influx of new customers once or create potentially loyal repeat customers?

The startup's seed round was provided by First Round Capital, Greycroft, and a variety of other VC firms and angels.