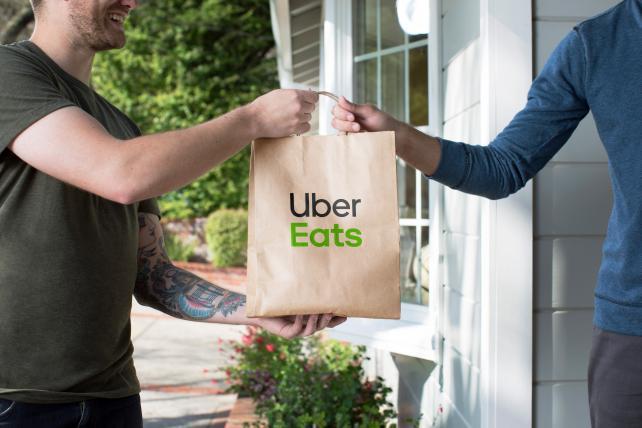 Services like UberEats have made ordering in easier.
Credit: Uber

Don Fox, the chief executive officer of Firehouse of America LLC noticed something strange a couple of years ago: during the midday lunch rush, his sandwich shops were relatively empty, but sales were better than ever. "I'd be thinking, 'Boy, business must be pretty bad.' But the numbers were telling me a different story."

People are still eating restaurant food-- they're just not doing it at restaurants as much. Delivery apps from DoorDash Inc., Postmates Inc., GrubHub Inc. and UberEats have made ordering in easier, and have changed the way food chains think about their business. The number of food delivery app downloads is up 380 percent compared with three years ago, according to market-data firm App Annie, and research firm Cowen and Co. predicts that U.S. restaurant delivery sales will rise an average of 12 percent a year to $76 billion in the next four years.

At Firehouse, revenue has increased 7 percent this year, mainly from orders placed online and through delivery apps, Fox said. More than half of his sales are for food eaten elsewhere.

"The impact from delivery is the greatest shift we've seen yet," said Fox, who has been at Firehouse for 15 years. "We're investing in where the business is going, which is off site." Since January, orders for pickup and delivery have made up 60 percent of Firehouse Subs' revenue.

In July, all 1,102 Firehouse locations replaced some of their tables and chairs with shelves where delivery orders can be stacked. About 10 square feet that used to be seating is now a place for couriers to grab orders.

In the 25 years the Jacksonville, Florida-based chain has been around, Firehouse Subs had traditionally rented spaces between 2,000 and 2,200 square feet for each of its restaurants. Now, Fox said he doesn't consider a lease over 1,800 square feet. "In some cities, where people are really ordering online and rents are higher, just 1,400 square feet is enough," Fox said.

David Orkin, who runs the U.S. restaurant division of real estate advisory firm CBRE, said other restaurants are also adjusting to fewer visitors. Big brands like Outback, Carrabba's and Buffalo Wild Wings come to Orkin to find and negotiate restaurant leases and renovations. Orkin declined to provide specifics of these leases, but said there is an overall downsizing of restaurant seating space as chains experience less foot traffic and more online and mobile-ordered pickups.

Orkin said the change is especially noticeable at the front of the house. "In many instances, chains want a whole separate area for delivery workers to come and go," he said. Restaurants also want doors specifically for delivery workers as well as designated areas for them to wait to pick up orders, so they're not hovering around the hostess stand, Orkin said.

Some new restaurant owners are skipping tables and chairs altogether and just leasing kitchen space to prepare food for couriers. Those are called cloud kitchens or virtual restaurants because they have no dining rooms or wait staff and sell their meals through the internet and mobile apps like DoorDash or UberEats.

Mark Chase, the founder of Restaurant Real Estate Advisors, a consulting group that helps restaurant entrepreneurs find space and negotiate leases, said that the majority of his clients are interested in the kitchen-only business model. "There is a general scaling down on seating space and scaling up on kitchen space, as people just want to eat at home, on the couch," Chase said.

Even the biggest fast-food chains are embracing the opportunity to sell more food through delivery apps. In August, McDonalds Corp, the world's largest fast-food chain, announced that it would spend $6 billion to redesign its U.S. restaurants. As part of the upgrade, many McDonalds restaurants will have designated parking spots for curbside pickups made through mobile orders. "We're continuing to see delivery orders of about double the size of the standard restaurant check," Chief Executive Officer Stephen Easterbrook said in July.