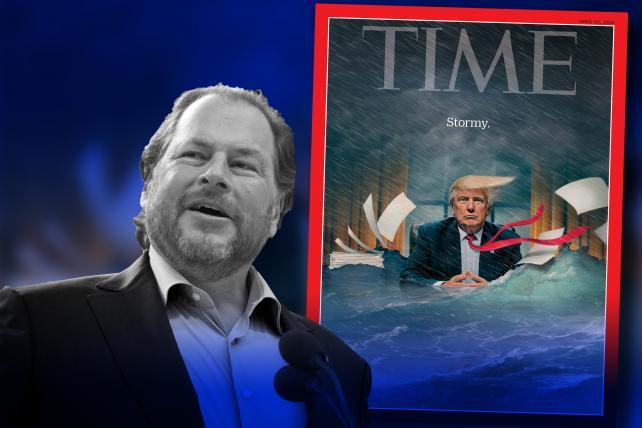 The move thrusts the brash 53-year-old entrepreneur, who helped lead the shift of software to an on-demand model, into a new role: media baron.

It's a transaction reminiscent of Bezos's $250 million acquisition of the Washington Post in 2013. That purchase brought Bezos a Pulitzer Prize-winning, 140-year-old newspaper but also put him in the cross hairs of President Donald Trump, who has called the Post an "expensive lobbyist" for Amazon.

Benioff, who has a net worth of $6.5 billion, serves as the co-chief executive officer of Salesforce, but the deal is unrelated to the tech company, according to a statement. The Benioffs are buying the media brand personally.

"We are honored to be the caretakers of one of the world's most important media companies and iconic brands," the Benioffs said in a statement Sunday. "Time has always been a trusted reflection of the state of the world, and reminds us that business is one of the greatest platforms for change."

Meredith, known for publications such as Better Homes & Gardens, acquired Time as part of its $1.8 billion takeover of Time Inc. in January. But it soon put some of the business's biggest titles up for sale, including Sports Illustrated, Fortune and Time itself.

Meredith said on Sunday that deals for the other titles are expected in "the near future."

The Wall Street Journal previously reported on the Time deal, which is slated to close in the next 30 days. The Benioffs said they won't be involved in day-to-day operations or journalistic decisions. They also plan to keep Time's current leadership team in charge.

Benioff has tried to bolster his reputation as a civic leader, through personal philanthropy and corporate sponsorship of public projects in his native San Francisco.

Benioff has criticized Trump in public appearances and through his Twitter account. And now the executive's profile is bound to grow. At a time when Trump counts mainstream American media as his personal enemy, Benioff has bought a high-profile outlet that has done many critical stories on the president since his election. Benioff will gain an additional platform with Time, despite his distance from editorial decision-making.

Time, founded in 1923, has contended with a decline in print advertising in recent years. But it continues to reach a total of more than 100 million readers in print and online. Its special editions, including Person of the Year, also remain closely watched releases.

Meredith management has said that it's selling Fortune, Sports Illustrated and Time because they have different audiences and advertisers than most of its other magazines -- a collection that focuses on entertainment, food, lifestyle, home, parenting, beauty and fashion.

"Time has been at the forefront of the most significant events and impactful stories that shape our global conversation," Meredith CEO Tom Harty said. "We know Time will continue to succeed and is in good hands with the Benioffs."