Snapchat finally submits to the NewFronts 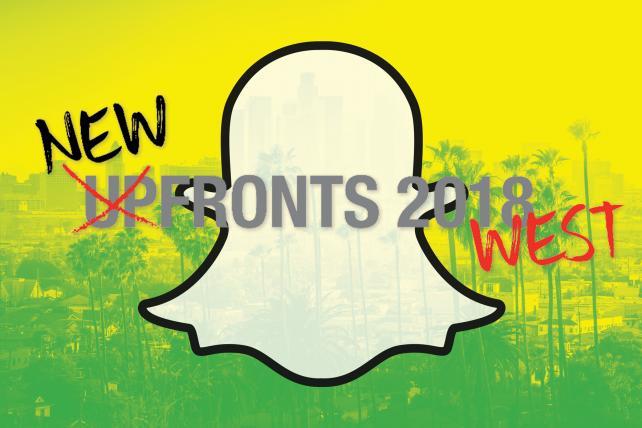 Snapchat, whose ad business relies entirely on video, will pitch buyers at the Digital Content NewFronts for the first time this fall.
Credit: Composite by Ad Age

Snapchat is taking the NewFronts plunge, participating in its first digital video showcase to impress advertisers and persuade them to hand over money to support its video endeavors.

On Wednesday, the Interactive Advertising Bureau announced the lineup for this fall's new West Coast version of its annual Digital Content NewFronts, where video publishers pitch ad buyers on their shows. While Snapchat has avoided the East Coast's annual digital upfront circuit for years, this one, in Los Angeles, will be in its backyard. More than proximity may have finally lured Snapchat in, however: The company's ad model depends entirely on video, and it could really use the extra promotion time with brands.

Snapchat declined to comment on what it plans to showcase, but the company has about 30 shows so far in a section called Discover, where digital publishers, sports leagues and TV studios create shows for its young audience. Snapchat's lineup spans reality, sports, style, comedy, music, dating and even crime shows. One popular show is "Phone Swap," a dating show where people swap phones to learn more about each other. That show averages 8 million viewers each time it runs, according to Snapchat.

Snapchat is the No. 1 social platform among teens, according to a report this week from eMarketer. There are 16 million 12- to 17-year-olds on Snapchat compared to Instagram's 12.8 million, according to eMarketer. Snapchat will be sure to emphasize its teen leadership title when it promotes its service at the NewFronts.

Snapchat disappointed investors when it reported ad revenue of $230.7 million for the first quarter, shy of Wall Street expectations, but it surprised them by beating predictions in the second quarter with $262 million of ad revenue, up 48 percent from the quarter a year earlier.

Snapchat also has an important new commercial format—six-second ads that people can't skip. The ads give advertisers more certainty that viewers will see them, and increase their ability to predict how the campaigns will work out and what they'll wind up costing. Snapchat also has new types of brand integrations to offer advertisers in shows. Just this week, Adidas advertised the release of new sneakers in a style show called "Fashion Five Ways." During the show, Snapchat users were able to buy the sneakers through Snapchat's e-commerce ads.

Snapchat has had its struggles competing with bigger rivals like Facebook, which also owns Instagram and offers a more mature ad platform, one that already caters to millions of advertisers. Snapchat's user numbers have been a concern, falling from 191 million daily active users in the first quarter to 188 million in the second quarter of this year. Meanwhile, rival Instagram claims 400 million people visit its Stories section daily, the video feature that mimics the core experience of Snapchat.

Notably, Facebook has never participated in the NewFronts held every year in New York, a lone holdout now among the social platforms, even though it's developing plenty of shows through its year-old Watch service and Instagram's IGTV, which just launched.

Twitter is a frequent NewFronts presenter, going after similar brands as Snapchat and offering similar media partnerships. Twitter has shows with National Basketball Association, National Football League, BuzzFeed and Bloomberg, among others.