Since Ross Levinsohn took over as interim CEO six weeks ago, Yahoo has announced a string of programming and distribution partnerships, including deals with CNBC, Spotify, and Clear Channel's iHeartRadio. Earlier this year, the company started working with ABC News as well. So what does all this deal-making add up to? 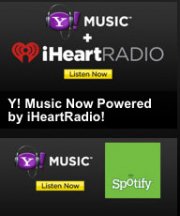 In an interview last week, Jim Heckman, Yahoo's chief of strategy and emerging businesses, said that the partnerships should be viewed as Yahoo doubling down on the content verticals where it already has a strong presence, such as news and finance, as well as a move to attract a younger user base.

"Where can we use help? Youth," he said, pointing to the deals with digital music services Spotify and iHeartRadio. "Yahoo has become uncool."

While Yahoo believes that the association with these music services popular with a younger generation of internet users may alter how the Yahoo brand is viewed, the deals are expected to provide more tangible results.

In the case of the Spotify deal, Yahoo will get a cut of revenue when its visitors click through to Spotify and sign up for an account. With Clear Channel, Yahoo will stream the coming iHeartRadio music festival in addition to other live events that Clear Channel puts on. Clear Channel is taking the lead on selling sponsorships around the Yahoo live-streaming of events, but Yahoo will share in that revenue.

Both the ABC News and CNBC pacts also involve the sharing of ad revenue on co-produced online video.

Mr. Heckman said discussions around several of the deals began last year, but were put on hold when former CEO Scott Thompson took over.

"Ross becomes interim CEO, and the only way to describe is that a tidal wave of interest walked right through the door," Mr. Heckman said. "Everyone wanted to reinitiate the discussions we were having."

In an ideal scenario, the partnerships will also help arrest declining engagement in the U.S. on Yahoo properties. Yahoo's reach is massive and has only gotten bigger. Looking back over the past three years, 10% more people in the U.S. visited a Yahoo property in May than in May 2009.

But over the same period, engagement on Yahoo has dropped rather precipitously as Gmail cut into Yahoo's email user base and Facebook took hold as a sponge for interact activity. The results: Yahoo monthly pages per visitor have dropped 36 % from May 2009 to May of this year in the U.S. and time spent per visitor has dropped 31% as well over the same period, according to Comscore data.

Could a redesign of Yahoo's rather stale websites help? Of course, Heckman said. Still, while a design refresh appears to be a priority, it's not at the very top of the list.

"It's totally fair to say that Yahoo leaves lot to be desired with its look and feel and that it needs to be modernized," Heckman said. "But content and video -- that 's the destination. I think making the doorway look way better is going to be important, but not necessarily the most important."

Yahoo's renewed focus on media has only ratcheted up the rumors around the future of its ad-tech technologies, most notably the Right Media Exchange. Mr. Heckman stressed that Yahoo is still evaluating its options and that no final decisions have been made.

"Focusing on being a platform for third parties - that 's challenging with a lot of competitors," he said. "But totally putting your [advertising] inventory in other people hands has its own challenges."