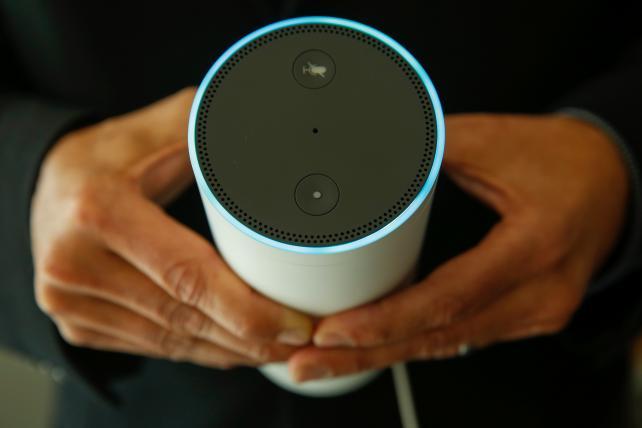 If you let your imagination run wild in the world of automatic speech recognition (ASR) and natural language understanding (NLU), and you throw in a little fear, uncertainty and doubt (FUD), you can come up with several illegal uses for systems such as Alexa Voice Service, Google Home, Siri and Cortana that will give you pause.

As I have previously written, Alexa is the "killer app" for the Internet of Things. It is not dangerous, at least not in its present form. But just for fun, let's play pretend in our world of infinite possibilities.

Note: I'm going to use "Alexa" for the wake word in the following examples. If you own one of Amazon's Echo devices, you can easily replace "Alexa" with "Echo" or "Amazon." If you have a Google or Apple device, you can replace it with "OK Google" or "Hey Siri," the wake words that work with those systems.

By the way, I have my Amazon Echo configured to give Alexa Voice Service (the underlying technology behind Alexa) a female voice with a British accent. I have my Waze app similarly configured. You can apply your own visualizations to my personal world of anthropomorphized disembodied voices -- which is, of course, the point. By anthropomorphizing our machine learning tools, we are less likely to fear them. But let us not be so easily fooled.

"Alexa. Find me a free version of this movie without commercials."

This is tending toward dodgy because unless you have paid for a streaming service or have already purchased a copy of the content you are watching, skipping the commercials is crippling to the businesses that produce and distribute content. And there aren't that many legit ways to do it without paying money. Will Alexa abet some piracy on torrent sites?

This idea could be augmented with a more legal alternative: "Alexa. Tell my DVR to skip this commercial pod." Ouch!

"Alexa. What song is that?"

Alexa is always listening. What if it could use its full 60-second buffer of recorded audio to help identify audio fingerprints or audio watermarks from soundtracks or other audio content? Amazon owns IMDb, and has about a zillion songs and videos in its Prime streaming service library. If it's listening anyway … well, you get my point.

But Amazon's agreement with consumers says that Alexa Voice Service only sends a fraction of a second of pre-stored audio to the cloud.

To go beyond the well-established capabilities of Shazam, which starts listening to your music only after your activate a request, Amazon would need to use pre-stored audio -- and to change that user agreeement.

"Alexa. I want to order the sweater Jennifer Aniston is wearing right now."

"Alexa. Put this song on my playlist."

"Alexa. Get this song (video, movie, TV series) for me for free."

This has to be a "coming soon" feature. If Alexa is always listening (and it is), it could easily pattern-match any audio from a song, video, movie, TV series, audiobook, 45 rpm record (what's that?) or any other audio source and use it as a front end for a commerce engine. Amazon is one of the biggest retailers in the free world. Like I said, this has to be in the works.

Unless you're in the media business, you probably don't know the archaic methodology used to determine TV ratings. I won't bore you with it here. However, since Alexa is always listening, it could accomplish something truly magical (and illegal, without the mother of all user agreements): real TV ratings.

Amazon knows who owns Echo devices. In fact, Amazon knows everything an advertiser needs to know about you, including your full contact information, credit card info, purchase history, streaming history (for Amazon Prime members) and more.

Imagine not only that Alexa identified what content was playing but also that there was simultaneous live conversation (proving there were people in the room while the content was playing). Apply a little machine learning and a bit of media modeling, and Amazon would own the most actionable set of marketing data ever created. Let's see -- Skynet, Empire, First Order … I actually don't have a good metaphor for this one. Ah, but wait …

"Alexa. Record the next three hours of audio from Echo Dot #2."

"Alexa. Tell Record-a-Call to record for 20 minutes after the phone rings."

I am not a conspiracy theorist. Not even close. But this is simply too obvious. Since Alexa is always listening, with a writ from a court of competent jurisdiction, and in full compliance with the Fourth Amendment, bugging your location is just a subpoena away.

Or, for the hacking community, it's simply open season.

Importantly, Amazon, Google, Microsoft, Apple and other organizations that are purveying ASR/NLU systems are going out of their way to prevent all of the above. But in practice, we do live in a world of infinite possibilities. "Alexa. Are you listening?" Of course you are. Intelligence communities, both foreign and domestic (including state and local law enforcement), are you listening? We'll know soon enough.