Marketing and Creative Direction Need to Be More Tightly Integrated
READ THIS NEXT
You Can't Stop Instagram Bots by Looking. Brands Have to Stop Buying Them

Earlier this year, an ad agency in Japan brought on a robot to work as its new creative director. Then in June, said robot came up with its very first ad, which attempts to sell breath mints by telling the tale of a shaggy dog who learns how to fly as glittering, minty-fresh dog breath spews from his mouth. While the "hiring" has attracted mockery, the situation is also eerily prescient -- the creative director role is growing more indebted to technology every day. I predict that in ten years, we'll still have people who technically have the creative director title, but the job itself will look entirely different.

Today, most ad agencies are still stuck five to ten years in the past when it comes to the creative director role. Creative directors continue to do things the way they've always done them: mapping the brand's identity, putting together Photoshop comps that demonstrate a couple of different variations on an ad, and then dusting off their hands.

But that's simply not enough for today's marketing reality, and it certainly won't be enough in five to ten years. Both the skillset necessary for the job and the conceptual ground covered by the job are shifting, and fast.

Now, more than ever, creative directors -- along with pretty much everyone else involved ad creation -- have to be familiar with user experience (UX) design. For some time now, successful ads have been moving away from the realm of the passive (zoning out in front of a TV commercial) and becoming much more of an interactive conversation. A creative director has to consider many more aspects of an ad now, along with all the traditional visual components: Who's viewing the ad? What are their interests? What sorts of engagement options within the ad might appeal to them? It's no longer enough to simply deliver the viewer a call to action at the end of the ad and then a chance to click through.

Knowing your way around UX design is one thing, but the new requirements of the creative director role go even deeper. It's vital that marketing and creative direction be properly integrated with one another, and I'm not seeing that happen enough today. While marketers decide where a campaign is run, the creative director should be involved in this process, considering not only how to make a campaign cohesive across all chosen platforms, but how creative can take advantage of the unique traits of each platform -- and, perhaps even more importantly, how creative should adapt depending on where the ad runs and how it performs there. In short: The creative director of the future will chat a lot more with marketing than he or she does today.

Then, there's the issue of variables. Long gone are the days when a couple of static Photoshop images sufficed for an ad campaign. Now that digital ads can incorporate intelligence about the user into the ad itself, it's not enough for the creative director to come up with one fixed-layout ad -- they have to design ads that will adapt themselves to data. Imagine a digital display ad for Starbucks that uses real-time weather information and geolocation data to show an appealing beverage to the user. Of course, someone shivering through a foggy morning in San Francisco is going to crave a different sort of drink than someone wilting under the scorching noonday sun in Dallas. Even something as simple as the variations in text -- "Hey, San Francisco!" vs. "Hey, Dallas!" -- dramatically affects the look of the ad (just look at the difference in character count). And that's just the opening sentence.

Ads like this hypothetical one are more like intelligent applications, and to produce them, the toolbox of the creative director has to expand. Photoshop, after all, is wonderful for creating flat, static images, but doesn't allow for designing customer interactions or pulling live content from the web. The best creative directors are already incorporating and integrating data and media alongside Pantone 15-3919 and Copperplate Gothic Light -- and in five years, every creative director will be solving for variables and creating interactive storytelling experiences just as much as they'll be thinking about "the big idea."

So, what's in store for the industry in ten years? Well, robot creative directors won't seem quite as futuristic. But more importantly, digital design and advertising will be more intelligent, and creative itself will essentially be done by computers. Dynamic creative optimization will take on a whole new importance -- that is, technology will continually optimize ad creative based on which moving parts are performing best.

This doesn't mean human creative directors will cease to exist. The creative director will still be defining the brand's identity, and informing the ad platforms of the relevant guidelines. But much of the process will be automated: day-parting (figuring out which times of day the ad is most effective), assembling the best combinations of image and text, placing the ad in the right place at the right time, to name a few. Don't worry, most creative directors will still be living and breathing humans -- but computer automation will be their new right hand. Today's creatives would be doing themselves a favor to accept, rather than resist, this looming reality coming in ten years. Or in five. Or in one. 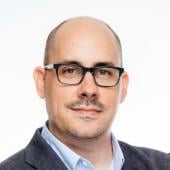 George Penston
George Penston is VP-product and design at Flite, a creative management platform.
Follow View all articles by this author