BAT Throws its Weight Behind Ads for U.K. E-Cigarette Vype

British American Tobacco, whose cigarette brands include Kent, Dunhill, Lucky Strike and Pall Mall, is spending millions on its British e-cigarette brand, Vype, with a mainstream TV, print and digital campaign ahead of an international roll-out for the brand.

Vype will be the first e-cigarette to run a multi-million pound campaign starting this week on the U.K.'s biggest commercial channels, including ITV and Channel 4, spearheaded by a glossy 30-second spot from Iris Worldwide.

"The category is screaming out for a brand," according to Nigel Hardy, head of Nicoventures U.K. and Ireland, part of the BAT group. "Most shoppers just ask for an e-cigarette – we want to create a brand that is modern, energetic and creative and stands out from the crowd. There hasn't been true innovation in tobacco for decades; consumers are looking for a smarter, better choice."

The move comes at a time when traditional cigarettes are seeing more and more restrictions placed on their branding opportunities, with packs dominated by health warnings instead of logos, and moves towards plain packaging in some countries.

Mr. Hardy would not say how much money is being invested in the U.K. campaign, which uses the tagline, "Experience the breakthrough" and promises "pure satisfaction for smokers." The enigmatic TV spot shows a man and a woman running separately through a night-time urban streetscape, before passing through a sudden cloud of vapor which represents the "breakthrough."

The meaning of the word "breakthrough" is deliberately left open to interpretation. Mr. Hardy said it could be about better quality, a more satisfying product, breaking away from tobacco, or innovation.

Iris Worldwide won the Vype business in fall 2013. Mr. Hardy said, "Iris has started to enrich our thinking about how we communicate. It's a difficult category to show the benefits and create a positioning. Vype is a modern brand targeting adult smokers in a way that appeals to them, so it's quite broad, because the needs of smokers are different according to their life stage." 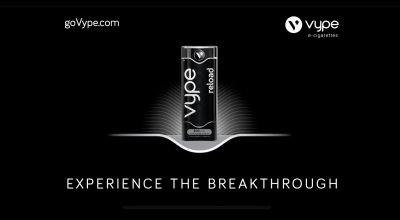 Ads for e-cigarettes have already proved controversial in the U.K., as manufacturers and legislators struggle to work out what is legal, and what is acceptable to the British public. The first three ads in the category were banned in September, and a fourth – for U.S. brand V2 – was banned last week for implying that it could be used as a smoking cessation device.

The U.S. e-cigarette market is currently unregulated, allowing for Big Tobacco's historic return to the TV airwaves after more than 40 years. Two of the nation's top three tobacco companies -- Reynolds American and Lorillard -- have rolled out TV commercials promoting their respective products in the category. Other e-cig makers, including NJoy and Fin, have also run TV ads. But looming regulations from the Food and Drug Administration could limit marketing efforts for e-cigarette makers in the U.S., where sales are expected to reach $1.5 billion this year, according to Bloomberg Industries.

The e-cigarette market is already crowded in the U.K., with around 100 different brands in competition. Many are sold online-only, but the battle for retail shelf-space is still fierce. Vype launched with online-only distribution in August 2013, but is now distributed in 10,000 stores around the U.K., including two of the biggest supermarkets, Tesco and Sainsbury. The aim is to reach 22,000 retail points by the end of the year.

Nicoventures is a division of BAT but is run separately. However, Mr. Hardy said, "BAT is excited about the category and committed to making it a success. We are delighted they are showing an enlightened approach." The connection with BAT has, Mr. Hardy claimed, given Vype access to the parent company's insight and understanding of the smoker.

Mr. Hardy would not say which countries Vype is targeting for expansion, but promised, "plans are in place" to create an international brand by the end of 2014.