To mark Global Dignity Day today, people around the world are being asked to donate something valuable: dignity. 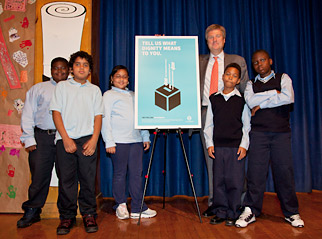 Global Dignity Day, which takes place each Oct. 20, was launched in 2008 to celebrate "oneness" in being human. It's the brainchild of H.R.H. Crown Prince Haakon of Norway; John Hope Bryant, founder and chairman-CEO of U.S.-based Operation Hope; and Professor Pekka Himanen of Finland, and is conducted in association with the World Economic Forum's Young Global Leaders. BBDO New York is the effort's pro bono agency.

This year's celebration is expected to bring together thousands of youth in more than 40 countries to celebrate the universal right to respect and fair treatment.

"At a time when no one seems to agree on anything, all around the world, when east?China?and west?America?can't seem to agree, and when Islam and Christianity seem at odds, when politics seems more about dividing than collaborating, the one thing we can all agree on is we all want more dignity," Bryant says. "Dignity truly is the universal language that we all need to learn, and one that brings us together, as you cannot have dignity until you first extend it to others."

"Our hope is that by celebrating a Global Dignity Day, every day can become a dignity day," says John Osborn, president-CEO, BBDO New York. "Most cause-related campaigns ask people to donate either money or time. Our work for global dignity doesn't ask for either. Rather, it asks people to do something much easier and which could arguably make a bigger impact: donate dignity."

As part of its message, Global Dignity Day offers the Five Dignity Principles:

Global Dignity Day evolved from Global Dignity, a program that asked volunteers to teach courses in dignity to their classrooms, houses of faith, nongovernmental organizations and schools to improve the state of the world.

"Dr. Martin Luther King Jr. was not just a great moral leader with a great message, he was also a great strategist, and a significant part of his strategy involved the power of media and communications," Bryant says. "The Global Dignity movement to spread a new language of dignity, here and around the world, is no different.

"Communications and media interests, such as BBDO NY and Clear Channel as an example, are playing a powerful role in advancing Global Dignity Day on Oct. 20, 2010, as we teach 'A Course in Dignity' in 50 countries around the world on one day," he adds. "This is doing well by doing good, at best. Or, as they say in South Africa, Ubuntu, 'I am me because you are you.'"