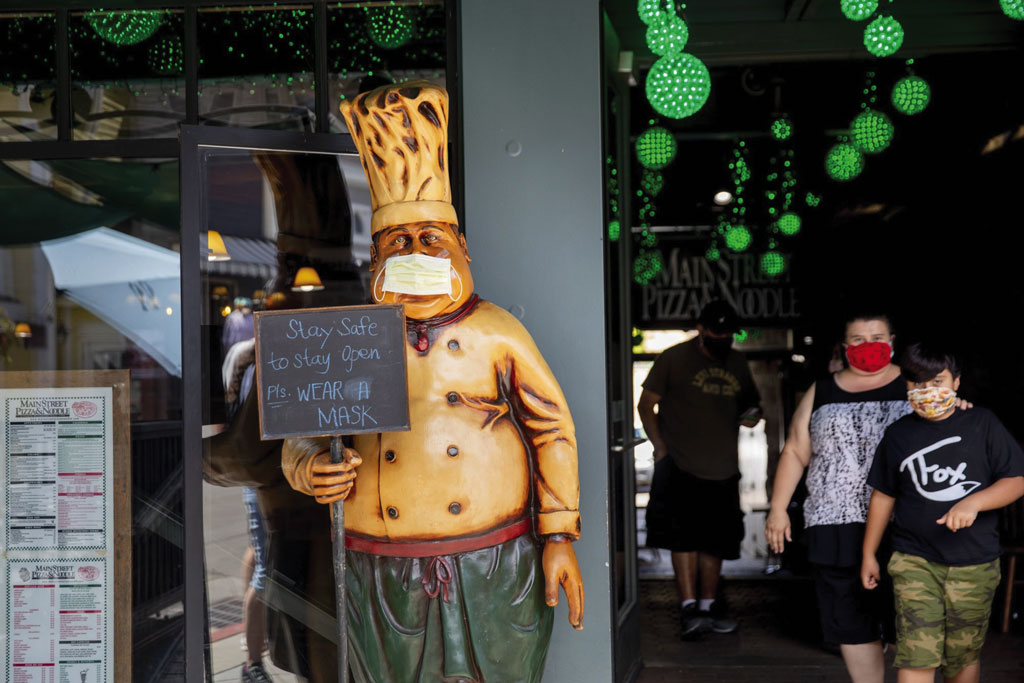 Dining in is the new dining out.

When COVID-19 first ravaged the U.S. restaurant industry, it seemed as if it might never come back as patrons stayed home and dining rooms were forced to close. But the sector is proving surprisingly resilient as chains adapt with new strategies. McDonald’s, Starbucks and Chick-fil-A—the three largest chains in the country—emerged from the early days of the pandemic with minimal long-term damage thanks to carryout, drive-thru orders and increased usage of delivery. And some casual dining chains are also seeing success with “ghost kitchens,” some of which use existing restaurant kitchens to create a limited menu sold under another brand name—no dining room required.
Image credit: Kim Raff/Bloomberg

Dining in is the new dining out.

When COVID-19 first ravaged the U.S. restaurant industry, it seemed as if it might never come back as patrons stayed home and dining rooms were forced to close. But the sector is proving surprisingly resilient as chains adapt with new strategies. McDonald’s, Starbucks and Chick-fil-A—the three largest chains in the country—emerged from the early days of the pandemic with minimal long-term damage thanks to carryout, drive-thru orders and increased usage of delivery. And some casual dining chains are also seeing success with “ghost kitchens,” some of which use existing restaurant kitchens to create a limited menu sold under another brand name—no dining room required.

It is anticipated that the industry will lose 91,000 units in 2020
The majority of the units will come from full-service restaurants, which will be down 18% from 2019 levels. Overall, Technomic anticipates that most closures will come from independents.
Restaurant unit count estimates as of 12/31
Source: Technomic. Based on middle case scenario

But restaurants that rely on business lunches and special-occasion dinners haven’t had as much luck pivoting in ways that are sustainable. And analysts still have, well, reservations, when it comes to industry prospects. Technomic revised its forecasts in August and—spoiler alert—they’re not pretty.

The U.S. foodservice industry is expected to lose $249 billion to $294 billion in 2020. And, even though the industry research firm predicted growth for 2021, the recovery won’t be enough to bring industry sales back to 2019 levels.

“I’m very bullish on the longer term but in the short term it’s just not catching any breaks,” David Henkes, senior principal at Technomic, says of the overall restaurant industry. Technomic predicts the foodservice industry’s nominal sales will fall anywhere from 24.3 percent to 28.8 percent this year.

Two saviors for the industry have been—was their any doubt?—pizza and wings. Chains focused on those filling foodstuffs posted double-digit same-store sales gains in the first half of 2020 even as market leaders such as McDonald’s notched declines.

Then, there is the broader foodservice space, such as school cafeterias, university dining halls, cafeterias set up at offices and hospitals, and the bleak travel and leisure industry. “None of that’s coming back this year,” says Henkes. 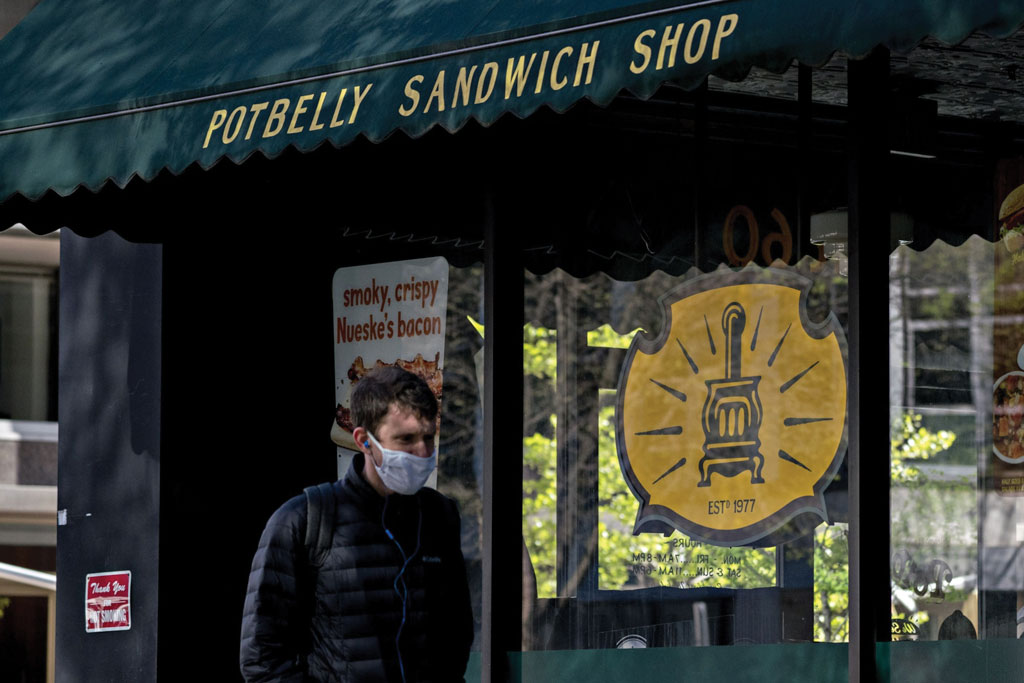 In Technomic’s best-case scenario forecast, only two sectors in the overall foodservice industry are expected to see growth in 2020: senior living, up 4.9 percent, and military, up 1.4 percent.

Here are some ways the industry may have changed for good:

From ghost town to ghost kitchen

Crowded dining rooms are gone at least until there’s a vaccine. And some restaurants are opting to do away with dining rooms altogether.

“The operational footprint of restaurants are changing,” says Henkes. “Off-premise absolutely needs to be built into any restaurant’s longer-term strategy.”

Brinker International, which owns Chili’s and Maggiano’s, rolled out a virtual or “ghost” chain called It’s Just Wings during COVID-19. The premise, as its name suggests, is it’s a chain that sells wings. Its site uses the slogan “Killer Wings, Stupid Prices.” Just don’t expect to see that line on a menu in a restaurant. It’s Just Wings is just a restaurant by name. It relies on Chili’s and Maggiano’s, using their existing kitchen space and staff, with delivery handled by DoorDash.

It’s Just Wings has the potential to top $150 million in revenue in its first year, Brinker International CEO and President Wyman Roberts predicted during an August conference call with analysts. And the investment was minimal. Other than buying some small refrigerators for a small number of restaurants, Brinker already had the equipment it needed to start the brand, Roberts said.

If It’s Just Wings does bring in $150 million a year, it would launch as the 220th largest chain in the country, based on Technomic’s Top 500 lineup according to 2019 sales. 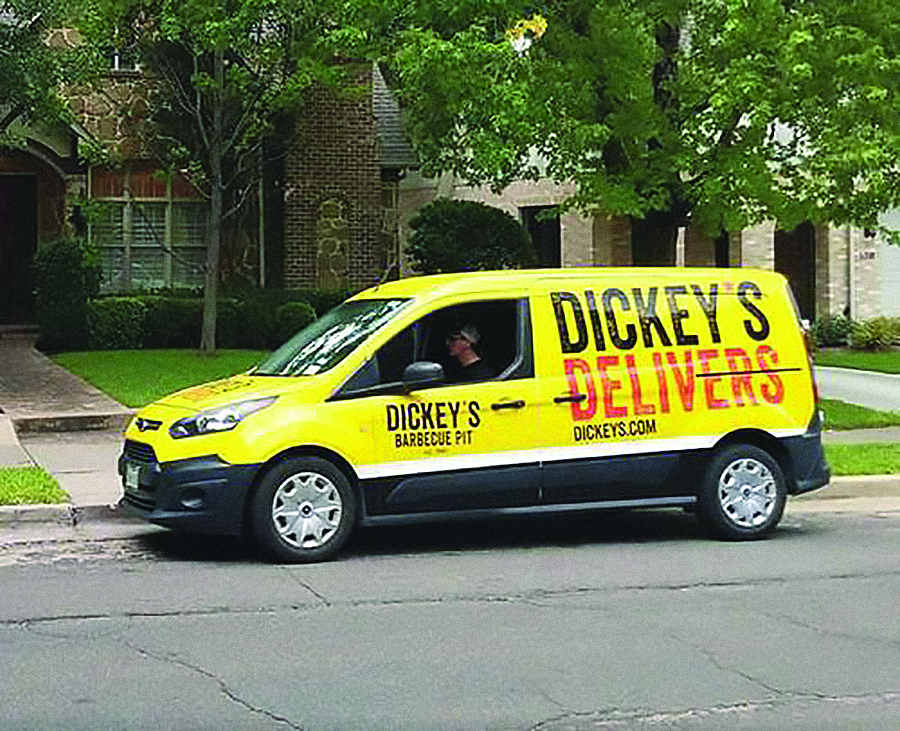 Dickey’s Barbecue Pit, meanwhile, is expanding within Chicago, Houston, and Orlando, where it already has restaurants, and into Providence, Rhode Island, with ghost kitchens that include a smoker and warming cabinet and no dining space.

“Delivery is a rapidly growing channel in our industry right now, and we believe it will continue to be a preference for guests post-pandemic,” Dickey’s Barbecue Restaurants CEO Laura Rea Dickey said in a statement in August. The chain’s existing franchisees were being offered a $5,000 discount on the cost of opening one of the chain’s ghost kitchen locations.

Other phantom operators include Kitchen United Mix, which offers takeout and delivery from multiple restaurant brands, all prepared in the same facility in each city where it operates. It began in Pasadena and has already expanded to Austin, Chicago, and Scottsdale.

Earlier in the pandemic, restaurants including chains such as Denny’s, Panera Bread and Potbelly began offering their kitchen ingredients almost as a grocery delivery service. Much like grocery stores sell prepared foods, restaurants began doing the opposite, selling their ingredients direct to consumers. That move allowed restaurant operators to sell through things like milk and bread that may otherwise have gone unused. It was a survival mechanism, not a sustainable strategy. The longer the pandemic persists, restaurants will make more money per square foot by selling their prepared menu items than by selling ingredient food.

But ghost kitchens appear to have staying power.

“It’s not something that’s going to go away because they’ve proven that they’re effective in a lot of different ways,” says Henkes.

2021 will see a spike in overall foodservice growth
As the industry declined sharply in 2020, 2021 will be the beginning of the recovery for almost all segments regardless of scenario. Those segments least impacted in 2020 will see more tempered growth, whereas those affected the most will see biggest increases.
Source: Techomic

Take it to go

Fast-food chains are benefiting from something many have had in place for decades: drive-thru lanes. Even before COVID-19, McDonald’s and other quick-serve chains got upwards of 70 percent of their sales from people who never got out of their vehicles. Now, delivery, curbside pickup, and drive-thru are the name of the game during these uncertain times.

“We are working with a couple of clients on designing the drive-thru of the future,” says Jennifer Jones, managing partner at Sterling-Rice Group who leads the agency’s design practice.

That might mean more restaurants being built with walk-up windows, a modification some restaurants have implemented during the pandemic, as well as having bike lanes in some locations, she says.

Shake Shack is beginning to install what it calls “Shack Tracks,” or ways for patrons who order ahead to pick up their food curbside, at a walk-up window, at a drive-up space or inside in an area that’s more clearly marked than before. It plans to build its first drive-thru in 2021. Even convenience store chain Wawa is building a drive-thru. But for full-service restaurants, the idea of having diners take their food to go was largely unheard of. Now, it has become more standard as restaurateurs look for ways to stay afloat. That means coming up with dishes that travel well and require little to no work at home. Tock, for example, tweaked its reservation software used by upscale restaurants, to stagger pickup times for patrons ordering meals from Michelin-starred restaurants. 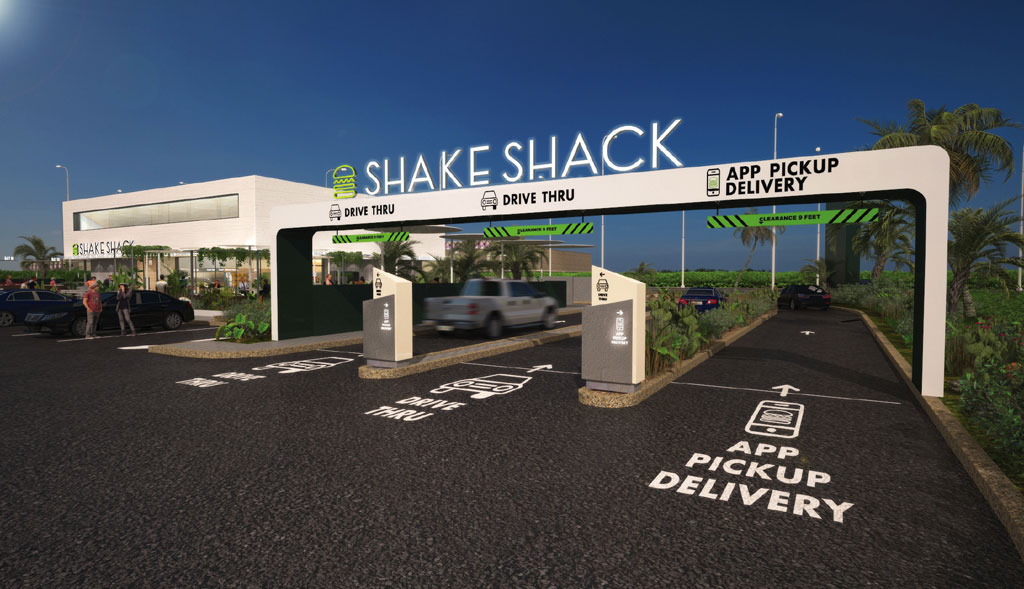 Have a seat, far away

Restaurants that are able to be open must make sure they don’t get too crowded. New York City is set to allow diners to sit indoors at restaurants beginning Sept. 30. Still, restaurants there will only be allowed to fill 25 percent of their prior capacity. Regulations vary widely on just how limited capacity needs to be. In some parts of California, for example, restaurants can fill up to 50 percent of capacity or 200 people, whichever is less, while other areas of the state have a limit of 25 percent capacity or 100 people, whichever is less. And in other areas of the Golden State, indoor dining at restaurants is still not allowed.

Diners should expect new setups for things like condiments, both at stations and on the table, and beverage dispensers. Want a refill? A staffer will likely now get it for you even in restaurants where that practice used to be do-it-yourself.

Reusable menus in many places have been eliminated, replaced with paper copies that can be easily recycled, or QR codes for diners to review the menu on their own phones. Sure, equipment manufacturers are trying to get restaurants to buy tech-enabled machines that eliminate touching, but with margins already squeezed, few operators may be willing to invest.

Jones says her agency helped Texas-based Cafe Express redesign its space to make it more effective during the pandemic, including changes such as cubbies for pickup orders, making them easier to grab without interaction. Self-serve beverages and condiment stations also moved behind the counter.

Downtown restaurants and coffee shops — previously prized for their ability to feed on-the-go commuters, handle the lunch rush and offer catering for in-person meetings — are suffering as many people continue work from home rather than from city center locations.

“Not all of them can survive with a much depleted population downtown,” says Henkes.

Potbelly was hammered early on during COVID-19 as many of its sandwich shops sit near offices in downtown locations. Its same-store sales plunged 68 percent, and it announced plans to consider permanently closing as many as 100 of its locations, a forecast later trimmed to as many as 50 closures. By early August, 16 of its more than 400 shops were set to be permanently closed.

Even chains that have been holding up are thinking about shutting locations. Dunkin’ already planned to remove about 450 self-serve kiosks inside Speedway shops and now expects to close up to 800 locations in all across the U.S. that weren’t doing as well as others, including the Speedway ones. Shutting 800 locations would eliminate about 8 percent of Dunkin’s U.S. footprint but only about 2 percent of systemwide sales, Dunkin’ said. Rival Starbucks is on track to close roughly 400 shops.

And some will just plain give up the ghost: Nearly 92,000 restaurants, or 14 percent of the 698,000 or so dotted across the U.S., may close this year, Technomic predicts.

Hear more about how the industry is changing by attending the virtual Ad Age Next: Food & Beverage Conference on Sept. 22.