Ads (sadly) not rebooted for ABC’s ‘All in the Family,’ ‘Jeffersons’ nostalgia trip | Ad Age
Skip to main content

Ads (sadly) not rebooted for ABC’s ‘All in the Family,’ ‘Jeffersons’ nostalgia trip 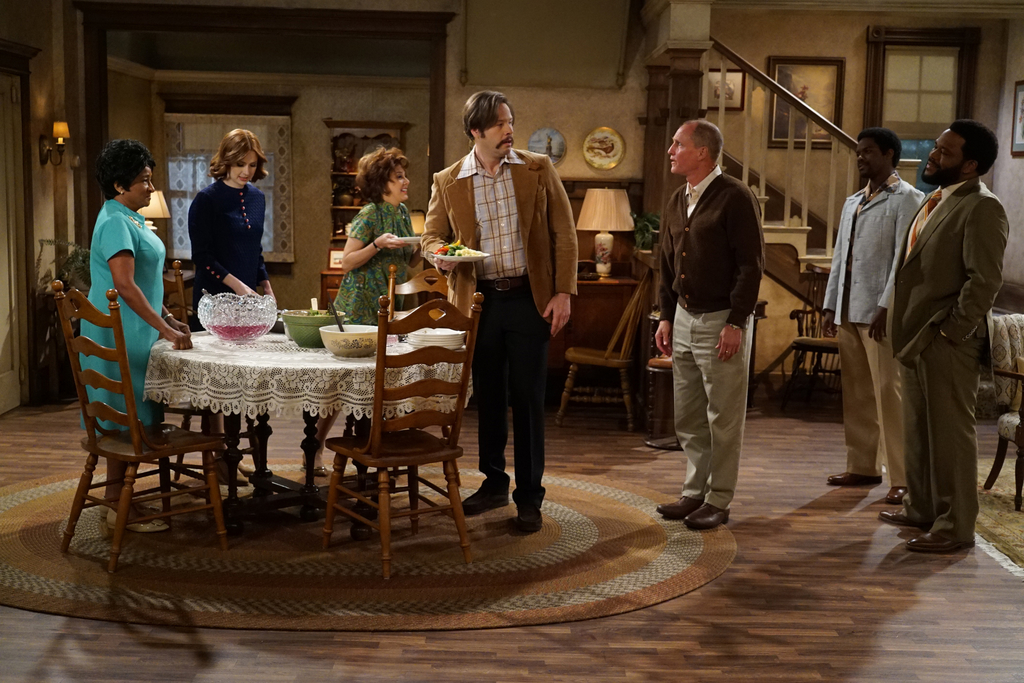 A scene from the ABC’s Norman Lear nostalgia trip.

You’d think ABC’s live re-staging of “All in the Family” and “The Jeffersons” seemed to have offered marketers a rare opportunity to dust off some long-forgotten creative from the leisure-suit era, but as it turns out, most of the brands that advertised in Wednesday night’s retro showcase didn’t exist back when the Norman Lear sitcoms first aired.

Of the 35 brands that aired commercials in the 90-minute ABC production, only seven would have been in a position to purchase national ad inventory in either original broadcast.

For the sake of establishing the timeline, the “Henry’s Farewell” episode of “All in the Family” adapted for the 21st century audience first aired on Oct. 20, 1973, while the “Jeffersons” pilot bowed on Jan. 18, 1975—five months after the resignation of President Richard M. Nixon.

Among the top spenders in last night’s live broadcast that would’ve been wholly alien to the Bunkers and the Jeffersons at the time the two episodes were initially televised include Google, Facebook and a little firm that had designed an interpreter that would allow the newfangled “microcomputers” to run the programming language BASIC. Originally dubbed Micro-Soft, the Albuquerque, New Mexico-based startup opened for business 45 days after the series premiere of “The Jeffersons.”

Other brands that weren’t part of the warp and weave of American life back in the early-to-mid-1970s are Old Navy, Olive Garden, PetSmart, Skittles, Chobani, LIFEWTR and Sleep Number. (During the Me Decade, one’s “sleep number” was determined by adding the number of milligrams of Quaaludes one consumed to the proof of the alcoholic tipple used to chase the pills down.)

Pharma brands that would have looked out of place in Weezy and George Jefferson’s medicine cabinet include the weapons-grade antihistamines Xyzal and Allegra, as well as AbbVie’s endometriosis drug Orilissa and Sun Pharma’s treatment for plaque psoriasis, Ilumya.

Brands that were in operation at the time of the original CBS broadcasts but weren’t active participants in the national TV marketplace include the then-sleepy direct-mail insurance company Geico and Goldfish crackers. According to iSpot.tv data, that leaves four consumer brands that regularly snapped up broadcast TV spots in the ’70s—M&M’s, Dr Pepper, McDonald’s and Listerine—and a trio of film studios in Universal, Disney and Paramount.

Should ABC next season elect to take a second nostalgia trip with another pair of old-school shows—a real-time resurrection of Aaron Spelling’s Saturday evening “The Love Boat”/“Fantasy Island” juggernaut starring everyone who died on “Game of Thrones” would provide the government ample cover to kickstart “The Purge”—McDonald’s and Dr Pepper brand strategists may want to get in on the reboot hustle. “All in the Family” and “The Jeffersons” were still going strong when Dr Pepper unleashed its 1977 “Be a Pepper” campaign—in the span of four short years, actor David Naughton would go from crooning about his sugar-water of choice to starring in “An American Werewolf in London”—while McDonald’s took the wraps off its “two-all-beef-patties-special-sauce-lettuce-cheese-pickles-onions-on-a-sesame-seed-bun” offensive the same year the Jeffersons moved from Queens to the Upper East Side of Manhattan.

Among the more memorable McDonald’s initiatives that intersected with the production of original episodes of “All in the Family” and “The Jeffersons” was the 1977 Shamrock Shake push that introduced a Hibernian Grimace (Uncle O’Grimacey) and the establishment of McDonaldland playgrounds, fast-food gulags that allowed parents to imprison their offspring inside giant anthropomorphic copburgers. Any rebroadcast or reinterpretation of these old commercials could prove to be as memorable as the shows themselves.

While ABC hasn’t committed to any future retro TV showcases, the ratings suggest that we haven’t seen the last of the format. According to Nielsen live-plus-same-day data, Wednesday night’s broadcast averaged 10.4 million viewers, making it ABC’s most-watched general-entertainment program since the series premiere of “The Conners” bowed on Oct. 16 to 10.6 million viewers.