After two seasons of ratings woes, TV's last great reach vehicle is firing on every cylinder
READ THIS NEXT
Rethinking TV attribution: The full-funnel approach 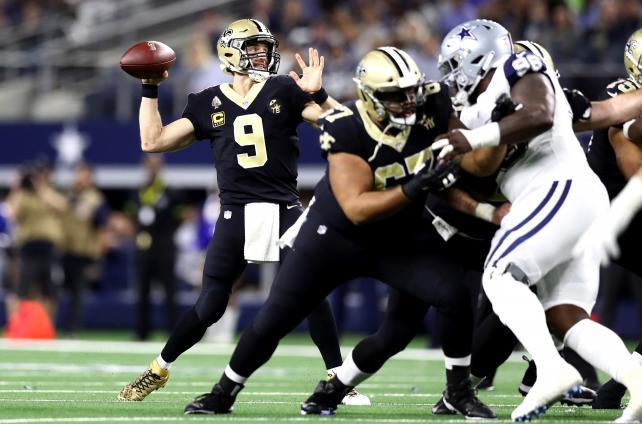 Drew Brees of the New Orleans Saints looks to pass against the Dallas Cowboys in the second quarter at AT&T Stadium on Nov. 29 in Arlington, Texas.
Credit: Photo by Ronald Martinez/Getty Images

Since it's not likely to be featured in the annual Academy Awards Death Montage, it is perhaps only fitting that we take a moment to pour out a few adult beverages to the memory of the NFL-is-doomed narrative, a canard propped up in large part by Russian bots, our nation's shouty chief executive and a whole bunch of casual observers who don't understand the first thing about the TV business.

Through Week 13 of the 2018 NFL season, the league's broadcast partners are on pace to win back a good chunk of the ratings declines they'd endured over the past two years, and the improving deliveries and healthy demand for commercial inventory in and around the games has set the scatter market booming. According to Nielsen data, all NFL TV windows are currently averaging 16 million viewers and a 9.3 household rating, which marks a 5 percent gain compared to the year-ago 15.2 million viewers/8.9 rating. And if a late-season run of high-profile games pays off in accordance with historical precedent, the final numbers for this season could pull even with the 2016 TV stats.

Before we get into some of the particulars of the ad marketplace, it may be worth taking a look at why the networks are enjoying their first NFL ratings boost in three years. While assigning causality to any human behavior is to traffic in a sort of woozy speculation, it doesn't take the analytic wiles of a B.F. Skinner to arrive at the conclusion that an explosion of scoring has helped boost the league's TV deliveries.

In effectively handcuffing defenses with rules that have radically emboldened quarterbacks and receivers, the league cleared the way for the sort of pass-happy theatrics that appeal to the casual fans and fantasy-besotted types who go a long way toward padding the weekly Nielsen stats. Through Sunday night's Rams-Bears game, the NFL is on pace to smash its records for the most points, touchdowns and touchdown passes tallied in a single season. Having already racked up a staggering 9,855 total points and 1,067 touchdowns, of which 715 (67 percent) have been secured through the air, NFL offenses are like something out of a video game, only in this case they've locked in the Rookie setting on Madden 19 and the opponent with the other controller is a drowsy cockapoo.

The increase in offensive scoring comes on the heels of the NFL's least productive season since 2009. Led by the Kansas City Chiefs (36.2), New Orleans Saints (34.4) and Los Angeles Rams (32.7), 10 squads are now averaging at least 25 points per game. And while the scoreboards have been lighting up from New England to L.A., most of the games have been competitive enough to satisfy the desires of everyone from the blue chip advertisers to the degenerate gamblers in the crowd. Season-to-date, 59 games have been decided by a field goal or under, and with three weeks to go before the playoff brackets are finalized, only nine additional contests must come down to a three-point spread in order to break the record set in 1997.

Sunday afternoon's AFC games were particularly tachycardic. In Miami the Dolphins beat the Patriots 34-33 on a 69-yard, multilateral walk-off touchdown, a miraculous finish that was followed in short order by the Chiefs' playoff-clinching overtime win over the Ravens and the seemingly marked-for-death Steelers' last-second loss to Oakland on a turf-cursed blown field goal. Toss in Dallas' OT win over division rival (and fading Super Bowl champs) Philadelphia, and the thesis about why the NFL is on the rebound is fairly self-evident. And the ratings will bear this out; per Nielsen overnights, this is shaping up to be the most-watched Sunday of football since 2016.

Leading this season's offensive charge is a mix of wised-up veterans and fresh-faced phenoms. Production is such that 10 quarterbacks have carved out a passer rating north of 100 points, while three signal callers (Ben Roethlisberger, Patrick Mahomes, Matt Ryan) are on pace to throw for 5,000 yards. In the history of the NFL, only five quarterbacks have piled up 5,000 yards in frequent flier mileage; the Saints' Drew Brees has managed the feat five times. This is a bone in the throat of olde-school football fans who long for the days when the Four Horseman of Notre Dame silently ground out 6-0 victories in jerky black-and-white newsreels. Everyone else seems OK with it.

While the younger QBs have put up more than their fair share of big numbers—when the dust cleared after Goff and Mahomes' Nov. 19 air war, there were 105 points blazing on the L.A. Coliseum scoreboard—an undersized 39-year-old is generating the sort of passing stats that keep viewers captivated. Brees currently is in possession of a florid 120.8 passer rating (Aaron Rodgers set the all-time record with a 122.5 score back in 2011) and has completed 75.7 percent of his passes. And since NFL Senior VP of Broadcasting and schedule guru Howard Katz apparently is gifted with precognition, the networks already have been able to showcase the high-flying Saints in their national windows seven times since the season began.

Brees and Co. have two more coast-to-coast tilts on their manifest, including a Dec. 23 showdown with Pittsburgh that promises to scare up huge deliveries for CBS, provided the Steelers haven't already bumbled their way out of postseason contention. The 11-2 Saints are currently the NFL's eighth-biggest national TV draw; among the top five are fellow division leaders Dallas, Chicago and New England.

Sheer record-tattering profligacy aside, there's a case to be made for whatever obscure blend of good fortune and conditioning has kept most of the league's top stars active throughout the season. This is a stark contrast to the 2017 campaign, which functioned as a sort of gridiron Antietam, as team leaders and fan favorites such as Aaron Rodgers, Andrew Luck, Carson Wentz, J.J. Watt, Odell Beckham Jr., Carson Palmer, Deshaun Watson, Richard Sherman, Ryan Shazier and dozens of others were laid low by devastating injury.

As much as bodily harm is an inevitable byproduct of a violent sport—lower leg fractures and ligament damage alone have conspired to sideline the likes of Jimmy Garoppolo, Jay Ajayi, Dez Bryant and Alex Smith—this season's devastation hasn't eliminated nearly as many marquee players. In a way, the injury factor feeds back into the scoring boom. Many of the same rule changes that have helped supercharge the NFL's offensive output were designed initially to protect quarterbacks, receivers, running backs and return specialists from absorbing concussive blows; that they seem to have played a role in increasing point production is a welcome, if not exactly unpredictable, bonus.

Speaking of hurt, the NFL this season has managed to avoid the sort of self-inflicted injury that made the last two seasons a source of intrigue for fans on all points of the political spectrum. As much as there's never been any solid evidence to link the surge of so-called "anthem protests" to the last two years of ratings drops, the league's decision to not police players' pre-game interactions with the flag robbed the slow-burning issue of any further oxygen. (That the networks reverted to their long-standing policy of ignoring the sideline ritual altogether also served to lower the heat.)

In denying the league's most vocal detractors of any additional incendiary material, the NFL this season largely has been able to go about the business of growing its ratings and generating billions of dollars in revenue. A quick Twitter search demonstrates how success can silence even the harshest critics—President Trump hasn't made a digital peep about the NFL since Sept. 9.

Of course, the two successive seasons of ratings declines did leave the NFL's broadcast partners with a bit less leverage than what they'd grown accustomed to during the upfront bazaar. According to media buyers, the going rate for the average 30-second unit in the nationally-televised Sunday games on CBS, NBC and Fox dipped between 5 percent and 8 percent versus the year-ago period, a rate cut that was consistent with the overall volume of the upfront sales. (NFL inventory brought in an estimated $2.1 billion during the summer sell-off, down around 5 percent compared to the $2.2 billion in commitments that were booked in the previous upfront.)

The price pinch and a slight reduction in the amount of on-air inventory in September and October led to a 19 percent drop in NFL ad sales revenue, per Standard Media Index estimates, although it's worth noting that the period in question featured one fewer Sunday slate than the same two-month span in 2017. In other words, the year-to-year comps reflected the absence of an entire lineup of Sunday afternoon regional and national broadcasts on CBS and Fox, as well as NBC's primetime showcase. That's a one-day haul of around $135 million that this year was nudged over to November's billings.

"The effects of the lower audiences last year are spilling into this season, as NFL revenue is down," says SMI CEO James Fennessy. "Nevertheless, as the market reports improving viewership, we will see how these trends change over the remaining months of the season."

Thus far, the scatter market suggests that the networks are on track to reverse those early losses, as pricing in some national packages is now up around 15 percent versus the rates set in the upfront. If demand remains as strong as it's been—and given the tightness of the playoff race and the schedule Howard Katz has cooked up for the final weeks of the season, it's hard to foresee a sudden slackening in advertiser interest—total in-game revenue could top Kantar Media's estimate of last year's take ($4.64 billion).

Given the unparalleled reach of the NFL and the demands of the holiday season, inventory in the remaining broadcasts is growing tighter. The late-national window shared by CBS and Fox is currently averaging 22.3 million viewers and a 12.3 household rating, good for an improvement of 3 percent from the year-ago period, while "Sunday Night Football" deliveries are up 7 percent to 19.4 million viewers and an 11.1 rating and ESPN's Monday night package is up 7 percent to 11.5 million viewers and a 6.9 rating. All told, the regional and national Sunday games are up 4 percent compared to this time a year ago.

The confluence of somewhat more restrained upfront pricing and lower ratings guarantees have served to reduce the amount of ADUs (audience deficiency units) earmarked to make unfulfilled advertisers "whole." With fewer freebies to dole out, broadcasters have more inventory to sell in an active scatter market. In a time of contracting ratings, ADUs have a way of accumulating; according to SMI estimates, makegoods last season accounted for nearly one quarter (23 percent) of all in-game NFL ad units. Eliminating the costs associated with making up for a great deal of ratings deficiencies simply puts more money back into the pockets of the suppliers.

As is usually the case, the NFL's biggest-spending categories include automotive, insurance, wireless, quick-service restaurants, mobile devices, movie studios, beer and credit cards. Per iSpot.tv estimates, the advertisers that have invested the most in NFL inventory are Verizon, Geico, Toyota, Hyundai, Ford, iPhone, Progressive, Chevrolet, Samsung Mobile and McDonald's. Together these 10 brands have steered an estimated $739.5 million in business to NFL broadcasters since the season officially kicked off back on Sept. 6.