A rapper named Little Dragon struts across a stage, baseball cap slung low on his forehead. The camera cuts to glistening McDonald's chicken wings, and Little Dragon plugs the product in a rap couplet—in Mandarin. "Hip-hop snack box/share it and it's better." 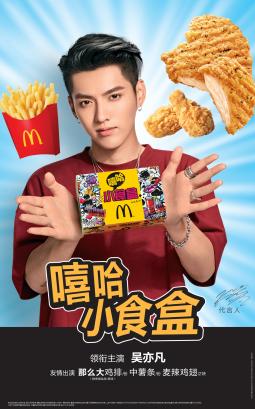 Welcome to "The Rap of China," a new singing contest and a major vehicle for sponsorships and product placements. It's also the first rap talent show in a country not known as a thriving hotbed of hip-hop culture. More: It's a massive hit. The online video platform that shows it, iQiyi, says there have been over 2 billion combined views in 10 episodes of the show, in which Chinese rappers in huge gold chains and slouchy sweats try to outdo each other.

It's a success with sponsors too, including local brands Nongfu Spring water and Xiaomi electronics, as well as Absolut vodka, Chevrolet Camaro and McDonald's. As is standard in China, sponsor content and product placements are a huge part of the show, and nobody is surprised to see a supposed rebel rapping about the pleasure of sharing McDonald's snack boxes.

Doing a rap show "was kind of a gamble—before it actually started, nobody knew what would happen," says Kevin Cao, iQiyi's commercial marketing director. "We put a lot of time and resources into it, investing more than $30 million." The program has more than made that back, taking in almost $46 million in ads and sponsorships.

One reason for its success is that mainstream stars appear too. Heartthrob Kris Wu, an actor-singer and former boy band member, is a celebrity mentor for the rappers, and though people online mocked his hip-hop credentials, he draws huge audiences. His catchphrase "Can you freestyle?" became a meme that publicized the show all over China's internet.

Until now, rap had been more subculture in China than mainstream, but nonetheless attracted government attention. In 2015, the Ministry of Culture blacklisted 120 songs, including hip-hop tunes, because of their subject matter (from flatulence to suicide). But the Communist Party apparently doesn't object to rap music itself, since the state broadcaster put it in a propaganda video in 2015. That song sampled speeches by President Xi Jinping and included lyrics like "Reform the supply side and upgrade the economy."

IQiyi, part of Chinese search giant Baidu, originally planned to hold a mainstream singing contest, a common form of TV entertainment in China, and had collected $46 million from sponsors to do so, Cao says. When iQiyi scrapped that project to go the rap route, it returned the $46 million and started over.

China has 751 million people online, according to official statistics, and online TV has been stealing ad dollars away from traditional TV in China as it has elsewhere. Each of the local internet giants owns a big video platform: Baidu has iQiyi, Tencent Holdings has Tencent Video and Alibaba Group Holding owns Youku Tudou. Most of the programming is free to watch, though people who buy subscriptions for a few dollars a month get extra content and see fewer ads. With so many people skipping interruptive ads now, more branded content is being built into the shows, from song lyrics to branded "stickers" dancing across the screens.

Chinese brands, more than multinationals, have embraced the zany sponsorship opportunities as they tend to be more experimental with their marketing. But foreign brands seemed to grasp the potential of rap on the mainland. Ruey Ku, Publicis media content general manager in greater China, says she believes "foreign brands saw the high relevance of hip-hop culture with the youth they're targeting."

McDonald's and Absolut were among three sponsors that came on board before shooting started, iQiyi says. Some sponsors joined afterward. McDonald's, the second-biggest sponsor, went all in; it tapped Wu to appear in commercials, and it has a snack box to match.

The show's top sponsorship cost $18 million and went to Chinese water brand Nongfu Spring, the name of which is emblazoned on the show's logo. That's at the high end for sponsorships of online TV but still affordable compared with traditional or satellite TV, where prices for a top show can run four times that.

Merchandise is another potential revenue stream. IQiyi created a brand called R!ch for the show, including big golden chain necklaces that feature in the contest. They're on sale on iQiyi's online shopping mall for $14 each. The company is also working on licensing deals with other brands.

But one of the biggest beneficiaries of the show has undoubtedly been the New York clothing brand Supreme, which Wu, the show's star, wears. On search engine Baidu, queries about Supreme are up about 170% this summer compared with the same period last year, according to Kantar Media CIC. That's just a stroke of luck for the Supreme brand: IQiyi says it's not a product placement.