Who Served Up the Better Coffee Media Strategy in 2008? | Ad Age
Skip to main content

Who Served Up the Better Coffee Media Strategy in 2008?

Optimedia's Antony Young Compares Dunkin' Donuts and McDonald's
READ THIS NEXT
ViacomCBS tests national addressable ads with Dish Media
We know the recession is hurting purchases of big-ticket items such as cars and flat-screen TVs, but even life's seemingly small luxuries, such as that morning latte, are being hit hard. Indeed, an Advertising Age study found that 60% of Americans have scaled back from premium coffees in the past six months, with the mighty Starbucks experiencing a flattening of its froth. Enter Dunkin' Donuts and McDonald's, which both upped their coffee-marketing efforts in 2008, hoping to steal some of Starbucks' share.

It's hard to discuss these two marketers' approaches to coffee without pondering Starbucks' year. The Seattle-based company has just about single-handedly democratized specialty coffees in the U.S. market since it went public in the early 1990s. Of late, however, the company has experienced Venti-size issues with investors, citing a loss of focus, overexpansion and the recession as contributing to its woes. Starbucks saw a 3% decline in same-store sales and a 53% profit drop in fiscal 2008. It also sought to close down unprofitable stores at the end of a transition year, in which former CEO Howard Schultz took back the reins of the company.

Starbucks, long admired by many for building its brand with only a passing interest in traditional advertising, faced a wave of activity last year from two very well-drilled media marketers in Dunkin' Donuts and McDonald's, which were looking to gain ground in this high-margin business.

Dunkin' Donuts is not new to coffee, having served cappuccinos and lattes since 2003. Despite its name, it earns 65% of its revenue from beverages. Its strong national media push in 2008 directly targeted Starbucks in a high-profile comparative ad campaign that included a blind taste test reminiscent of the Pepsi/Coke wars.

Not to be outdone, McDonald's aggressively promoted its own coffee as a value proposition; increased the availability of coffee facilities across its nationwide restaurant network; launched new products such as iced coffee and sweet tea; and rolled out a regional program to support openings of its branded McCafes.

So how did their media campaigns compare?

Dunkin' outspent McDonald's 60% on coffee-specific products in measured, paid media -- $27 million to $17 million. Dunkin' had an advantage in terms of media efficiency, and was able to support its activities with national cable up-weighting in key strategic markets. It spend 83% of its budget on TV -- two-thirds of that on spot TV and a third on cable. 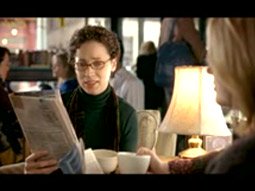 In 'Intellectuals' McDonald's positions itself as a place where women 'don't have to listen to jazz all day long,' and can 'read gossip magazines,' 'wear heels' and 'talk about TV.'
Dunkin's TV ads established a distinct competitive position against Starbucks. "Small is the new tall" poked fun at Starbucks' sizes. The taste-test ad took on Starbucks more directly by actually naming the chain in the commercial, as a woman in a lab coat surveyed coffee drinkers. The point was hammered home with the line, "More hardworking Americans preferred the taste of Dunkin' Donuts over Starbucks." Within a week of the ad's launch, 45,516 people had visited the dedicated microsite dunkinbeatstarbucks.com, and weekly traffic to DunkinDonuts.com jumped 61% to more than 196,000, according to web-analytics company Compete. The campaign also garnered more than 6,000 blog posts within a few days of its launch.

McDonald's spent 97% of its traditional media budget on spot TV to support its McCafe rollouts and on regional promotions in 74 local markets. Two McCafe TV commercials, titled "Intellectuals" and "Hipsters," took a gentler stab at Starbucks. "Intellectuals" begins with two studious-looking women reading in a Starbucks-like setting. One of them snobbishly announces to the other that "McDonald's is serving lattes now," to which her friend replies, "McDonald's ... That's fantastic!" The two then shed their feminist personas by throwing down their reading materials and enthusiastically gab about how they now have a place where they "don't have to listen to jazz all day long," and can "read gossip magazines," "wear heels" and talk about TV.

The copy strategies are similar, but Dunkin's more aggressive and consistent stance resonated more with me.

At Dunkinbeatstarbucks.com consumers are given the opportunity to send an e-card to 'your less fortunate Starbucks friends.'
McDonald's set up a website, unsnobbycoffee.com, to promote its Washington-state McCafe outlets. The site offered visitors an opportunity to e-mail friends and intervene in their drinking of high-priced coffee, as well as guides to what goes into a mocha or cappuccino. I'm thinking people in Seattle would know their coffees, so I wonder if that feature was really able to hit the mark with its intended audience.

Dunkinbeatstarbucks.com is a classy site that communicates the hard-hitting competitive message with clarity and humor. On entering the site, you have two options: "Learn the Truth," which presents Dunkin's coffee story, and "Spread the Truth," which provides the opportunity to send an e-card to "your less fortunate Starbucks friends." Dunkin' spent some 15% of its total media budget on paid internet, a significant amount compared with anyone else in the category, promoting the site and other online offers. Ads were served up across a number of sites, including Yahoo, AOL, CNN, CNBC, MSNBC, Fox Sports, MLB.com, Good Housekeeping, Cosmopolitan and Digg.

When Starbucks announced it was simultaneously shutting down all 7,100 U.S. stores for a retraining effort, Dunkin' Donuts was quick off the mark, offering 99-cent espressos. On April 15, Dunkin' celebrated Tax Day by offering a free doughnut with the purchase of a cup of coffee. On May 15, it held its second annual Free Iced Coffee Day, giving away 4 million cups. Dunkin' also benefited from its brew-at-home in-store and product-sampling program, which was supported by TV advertising.

In June Dunkin' launched its "Bases Loaded " campaign, a summer iced-beverage promotion. Iced coffee, iced tea and smoothies came with a peel-away sticker that revealed a one-time login code for participation in an instant-win game in conjunction with Major League Baseball. The code sent consumers to a website where they could face either Jonathan Papelbon of the Boston Red Sox or Joba Chamberlain of the New York Yankees and win prizes such as video games and consoles, as well as tickets to local baseball games.

McDonald's promoted its national coffee promotions with special prices. It touted its ice teas in combination with its chicken sandwich and ice coffees over the summer in the buildup to the Olympics. 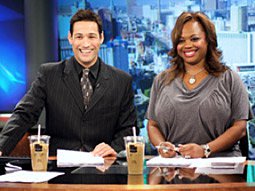 McDonald's caused a stir with some clever paid product placement on the set in front of news anchors on Las Vegas' KVVU morning news show.

McDonald's drove a lot of promotion through outdoor and print buys in a number of markets, including Louisville, Ky.; Chicago; Detroit; Kansas City, Mo.; San Diego; and Seattle. Its ads ran on spot TV with subtle differences in each market. When McCafe launched in Chicago (its largest market so far), in December 2008, a TV campaign highlighted "McCafe Mondays," a promotion that offered customers a free eight-ounce coffee of their choice. Urban radio and TV ads in Midwest regions feature jingles performed by Cleveland soul singers Dwele and Conya Doss. While many McCafe ads include some type of dig at Starbucks, McDonald's Seattle launch took it to another level by emblazoning billboards adjacent to Starbucks' headquarters with "Large is the new grande" and "Four bucks is dumb."

McDonald's exploited smart nontraditional media plays that helped it break out of the usual advertising spots. It caused a stir with some clever paid product placement on the set in front of news anchors on Las Vegas' KVVU morning news show. On Fox's WFLD "Good Day Chicago," the segment "Breakfast Buzz" was shot in front of one of the chain's restaurants. 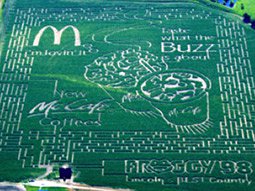 McDonald's even created a McCafe on wheels to bring the concept to customers and sample the offering in the hope of bringing new or latent customers back into its restaurants.

I liked Dunkin's creative strategy. It took a firm stance, competing head-to-head with Starbucks. It was timely and hard-hitting and captured a shift down by consumers to other coffee options. Will it move the hard-core Starbucks drinker? Unlikely, but it is the aspiration brand leader in the category, and the advertising likely has encouraged a number of consumers to re-evaluate their coffee choices. However, I'm not convinced Dunkin's media strategy matched the bravado of its creative approach. Its media plans appeared efficient -- nothing wrong with that -- but fairly standard, apart from a strong push online, which was a definite strong point in Dunkin's communication plan.

I felt that McDonald's -- a long time national TV advertiser -- showed a lot of nimbleness in thinking and acting local. It customized its creative by individual region, it developed more imaginative on-the ground media tactics and while some of its creative let the company down, I think its media strategy was able to do the very difficult task of getting a coffee drinker to consider McDonald's as an acceptable, more cost-conscious option. Its local strategies have helped lay the groundwork for a national media initiative on McCaf?. McDonald's same-store sales in the U.S. for the second half of 2008 were up around 5% with the quick service restaurant citing beverages and the expansion of McCafe's as one of several factors helping this performance.