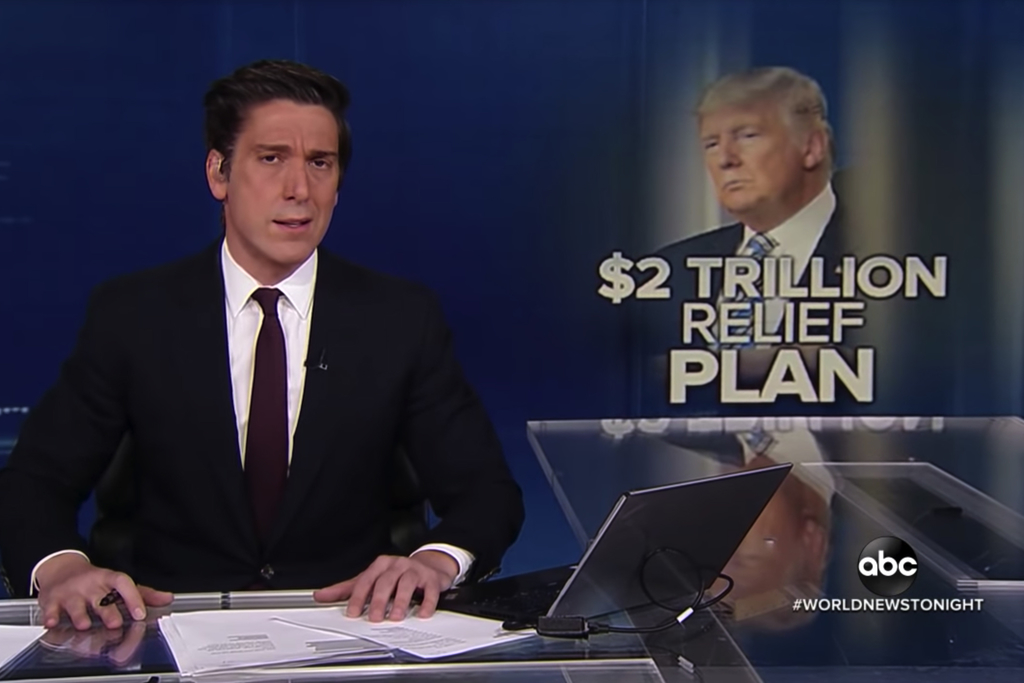 Having been shut out of their movie theaters, sports arenas and shopping malls, Americans looking to wait out the coronavirus pandemic have taken shelter with an old standby: TV. But as the Nielsen data demonstrates, the return to the familiar comforts of home has in no way been a stampede; since people began to restrict their outside activities, the uptick in usage for the most part has been incremental.

While it’s difficult to establish a start date for the national drift indoors, things began to go dark here in New York on March 15, when Mayor Bill de Blasio announced that all bars, cafes and restaurants would be shuttered in a bid to help slow the spread of the virus. It was also on that very night that national TV usage began to increase for the first time since the broadcast season began back in September.

According to Nielsen live-same-day data, prime-time TV consumption on March 15 saw a modest 1 percent uptick compared to the year-ago period, and while that initial increase amounted to what may as well have been a rounding error (net gain: 1.08 million viewers), that Sunday evening marked the start of what is now an 11-day foray into the black. To put the ongoing usage hikes in context, the last time this sort of thing happened was in the immediate aftermath of the Sept. 11, 2001, attacks on New York and Washington. (Those terror-fueled numbers are complicated by the fact that the news programming that week aired without commercial interruptions. The ratings were never entered into the archives.)

Since the Ides of March, primetime TV usage is up 5 percent, with an average 93.6 million viewers tuning in to the broadcast and cable networks compared to 89.4 million in the year-ago period. That marks a neat reversal of a season-long trend that has seen TV usage fall 7 percent versus the first 25 weeks of the 2018-19 season. Compared to the previous 10-day stretch (March 5-14), the lift is even more pronounced, with overall usage up 12 percent from 83.6 million viewers.

Proportionately, broadcast usage during the shutdown has enjoyed a slightly more robust lift, as the Big Four networks have averaged 18.9 million viewers per night, up 7 percent from 17.7 million in the year-ago period when going outside was still sanctioned. When compared to the previous 10 days, usage of the English-language networks was up 19 percent.

News you can use

While not exactly monocle-popping—the net gain in overall TV deliveries works out to an additional 4.19 million viewers per night—the spike in PUT levels (the acronym is industry shorthand for “People Using Television”) and the individual program ratings suggest that many Americans are turning to TV as a news destination and an outlet for virtual comfort food.

For all the noise that’s been made about the impact cable news has had on the U.S. political biosphere, the nightly programs on Fox News Channel, CNN and MSNBC only draw a fraction of the audience that tunes in for the evening news on ABC, NBC and CBS. And with so many people stuck inside and looking for answers, the broadcast ratings have skyrocketed.

As New York reels, a spike in broadcast news ratings

During the week of March 16, “ABC World News Tonight with David Muir” averaged a staggering 12.5 million viewers, edging “NBC Nightly News with Lester Holt” (12 million) while maintaining a healthy social distance from “CBS Evening News with Norah O’Donnell” (7.6 million). The Muir-anchored ABC newscast saw its deliveries soar 45 percent versus the year-ago period, when it averaged 8.7 million viewers, while Holt’s show grew 56 percent and O’Donnell was up 21 percent. (A year ago at this time, CBS’s newscast was anchored by Jeff Glor.)

So massive was the turnout for the ABC and NBC newscasts that they ranked as the week’s two most-watched shows on all of TV. CBS’s “60 Minutes” was the third-biggest draw, averaging 10.9 million viewers that Sunday night. The “World News Tonight” audience was its largest in more than two decades, while NBC scared up its biggest evening news crowd in 15 years.The two nightly news leaders also dwarfed their respective networks’ typical primetime turnout. According to Nielsen, Muir’s average deliveries were about 2.3 times the size of ABC’s seasonal average during the 8-11 p.m. time slot (5.5 million viewers), while Holt’s reach was nearly 1.8 times that of NBC’s nightly average (6.88 million).

Of more interest to advertisers, the three programs boasted even greater growth in the core news demo. NBC’s nightly newscast won the week with an average draw of 3.3 million adults 25-54, good for a 98 percent lift versus 1.6 million (March 18-22, 2019), while ABC’s 2.9 million members of the dollar demo marked a 66 percent lift. (Holt’s big demo showing snapped what had been a 12-week winning streak by Muir.) CBS’s average draw of 1.7 million was good for a 30 percent boost, and gave O’Donnell her best demo deliveries since she took over the anchor desk in July 2019.

The same week the broadcast networks were leading the way, the cable news channels put together a predictably strong run as well—although the absolute deliveries paled in comparison to the Big Three. Fox News outpaced its cable rivals with an average draw of 4 million primetime viewers, of whom 807,000 were adults 25-54 (compare that with CNN’s 2.1 million/739,000 and MSNBC’s 2.44 million/472,000), but even those segment-leading results weren’t in the same league as the Holt/Muir/O’Donnell deliveries at 6:30 p.m.

Stay-at-home Americans looking for some local perspective on the COVID-19 outbreak didn’t limit their news-watching to the national outlets. According to data culled from Nielsen’s 25 Local People Meter markets, cumulative viewership of morning, fringe and late news dayparts was up 7 percent to 48.3 million during the first full week of March, while the following seven-day period gave rise to a 10 percent boost, as local news drew some 52.4 million viewers. Gains among the advertiser-coveted demos were even greater, as deliveries of adults 25-54 were up 19 percent in the first week to 15.2 million, before jumping 28 percent to 16.9 million the next week.

Amusing Ourselves to Death

Naturally, homebound viewers aren’t devoting the entirety of their TV time to the horrors of the coronavirus. As you’d come to expect during a time of unprecedented fear and confusion, a good deal of escapism is being indulged behind all those closed doors.

While most broadcast shows have experienced at least some increase in their nightly deliveries, the biggest gainers have been the programs that already do quite well for themselves in less harrowing times. TV’s most-watched scripted series, CBS’s “NCIS,” on March 24 notched a season-high 13.2 million viewers, up 23 percent compared to its most recent original episode (10.7 million). The procedural drew its largest live-same-day audience since Feb. 12, 2109, and the 2.4 million adults 25-54 who tuned in gave CBS its third-highest scripted demo of the 2019-20 campaign.

Also enjoying big agoraphobia boosts were ABC’s “Grey’s Anatomy,” which on March 19 improved its share of advertiser-coveted viewers by 21 percent (with an average draw of 1.94 million adults 18-49, or a 1.5 rating, the episode was the show’s biggest draw since the season premiere on Sept. 26), and NBC’s “The Voice,” which on March 16 saw its demo deliveries shoot up 41 percent to a two-season high (2.3 million adults 18-49).

As much as it’s likely that some of the live-same-day gains may be chalked up to a decline in time-shifting—you may as well watch “Grey’s” when it airs, rather than save it for a rainy day; after all, when you’re stuck inside the house—we won’t be able to suss out any definitive trends in viewer behavior until much more data becomes available. But in the early going, the rate-of-change for live viewing among adults 18-49 (up 15 percent) is only a few steps ahead of the gain in time-shifting (up 11 percent), and the platforms that have seen the greatest increase in usage among the sub-50 crowd are video game consoles (up 26 percent) and internet-connected devices like Apple TV and Roku (up 28 percent).

Predictably enough, usage of streaming services such as Netflix and Amazon Prime has jumped significantly during this period of restricted consumer activity. According to Comscore data for the period spanning March 1 to March 16, total streaming hours on connected TVs were up 24 percent versus the year-ago period. Over the course of that 16-day span, Netflix accounted for a 37 percent share of all streaming hours via connected TV, outpacing Amazon Prime (16 percent) and Hulu (12 percent).

In the absence of a streaming currency, much of the insights on over-the-top viewing during the current crisis have to be pulled together from a heap of various sources. For example, the data analytics firm Samba TV reports that the combined usage of Netflix and Amazon Prime was up by double-digit percentages between March 12 to March 18, with time spent with the over-the-top platforms up 41 percent on the terminal date of the study. Another report from the TV measurement company Alphonso says that streaming is up 25 percent since Jan. 31, but its data set doesn’t include any intel on the notoriously secretive Netflix.

Nielsen itself has looked back to recent cataclysms to get a sense of how consumer behavior changes during a crisis, but its precedents (a five-day spike in TV usage in Houston as it relates to an August 2017 hurricane and the 48-hour Snowpocalypse event in New York the previous year) were both short-lived and of relatively limited scope. That’s perhaps not entirely useful when trying to think about a scenario in which the bulk of us are still glued to the couch two months from now.

Another factor that effectively makes an analytical hash of things is the fact that people in Houston and New York at least had televised sports to carry them through their respective calamities. As the games that drive so much of live TV viewing drift further away (recent reports suggest that the NBA season is unlikely to resume in some form until the middle of June, which is about when you may start to see the first signs of life from a long-dormant Major League Baseball), it’s impossible to say with any conviction that the recent spike in deliveries will continue apace.

The disruption of the studio development cycle also won’t do the networks any favors; as it stands now, at least 30 scripted series are expected to complete their 2019-20 cycles without airing a full complement of episodes. In the absence of sports and with nothing left in the hopper but reruns and low-impact postseason fare, will those who’ve come back to TV fall back on Netflix’s vast archives? And even if people continue to submit to the passive delights of channel surfing, will the bonus eyeballs serve as a boon to advertisers when so many consumer activities are now off-limits? Last week was TV’s most-watched in 14 months; do all those added commercial impressions benefit the networks when so many free-spending categories (movies, retail, travel) are now effectively on ice until further notice?

For now, questions are all we’ve got. For good or ill, we’ve got all the time in the world (or at least until Easter) to try to answer them.