Emmys sink to a new low as streaming, premium cable leave network TV in the dust 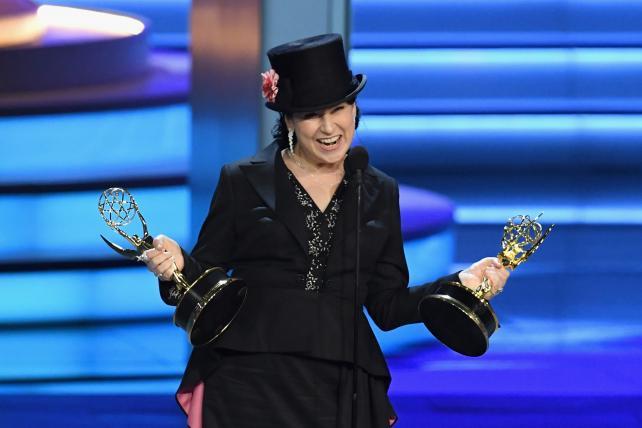 As streaming services like Netflix and Amazon Prime increasingly make off with the lion's share of the Emmy Awards accolades, the TV industry's annual celebration of itself continues to shed viewers.

According to Nielsen live-plus-same-day data, NBC's live broadcast of the 70th Annual Emmy Awards delivered an historically diluted audience, averaging 10.2 million viewers, of whom approximately 3.1 million were members of the 18-to-49 demo that advertisers want most. Overall viewership was down 11 percent compared to last year's Emmys, which aired in the show's usual Sunday night spot opposite NBC's "Sunday Night Football."

While Monday night's broadcast now stands as the all-time lowest-rated Emmys on record, the declines are in keeping with the diminishing returns posted by TV's other high-end award shows. In January, CBS's presentation of the 60th Grammy Awards plunged 24 percent to 19.8 million viewers, making it the least-watched Grammys in nine years. Two months later, ABC's coverage of the 90th Annual Academy Awards slumped to an all-time low of 24.4 million viewers; as with the Grammys, this worked out to a loss of 24 percent of the year-ago audience.

What's peculiar about the Emmys is that the show now largely functions as a three-hour infomercial for the streaming services and premium cable channels that are putting the bite on broadcast TV's hoary ad-supported business model. But for the mugging of hosts Colin Jost and Michael Che and a number of drop-ins by their "Saturday Night Live" cast mates, NBC wasn't particularly well represented on the dais; of the broadcast-high 16 nominations the network received in the televised categories, it came away with just one piece of hardware, for Best Variety Sketch Series. (Lorne Michaels accepted on behalf of his "SNL.")

The only other award associated with a broadcast network was the statuette presented to director Glenn Weiss for his work on ABC's Oscars telecast. Weiss made the most of his moment in the sun by using his time at the podium to propose to his girlfriend. She accepted.

The rest of the night was a big-budget promo reel for the likes of Netflix, Amazon Prime, HBO and the elite basic cable network FX. The spendthrift Netflix beat out HBO for bragging rights for the most Emmy wins, racking up seven trophies to the premium cable net's half-dozen. Including the unaired categories, the two programmers ended in a dead heat with 23 apiece. Amazon also snarfed up a whole lot of airtime, as its period comedy "The Marvelous Mrs. Maisel" laid claim to five Emmys.

Marketers in the audience who may want to take advantage of the success of Emmy winners like "The Marvelous Mrs. Maisel" are, of course, out of luck, as advertising on the service thus far has been limited to a handful of brand integrations and some avails in its NFL simulcasts. Other Emmy titans like Netflix and HBO are no-fly zones for advertisers.

All told, ad-free platforms accounted for 18 of the night's 26 Emmy wins.

Recently acquired by the Walt Disney Co., the John Landgraf-helmed FX was ad-supported TV's most visible representative, hauling off three Emmys for its "The Assassination of Gianni Versace: American Crime Story" and another pair for "The Americans."

Given that the show itself provided scant exposure to its own programming, NBC went all-in on placing in-house promos during its Emmy commercial breaks. According to iSpot.tv, the Peacock aired the equivalent of 36.5 standard 30-second spots for 17 of its new and returning series. among the series enjoying the most exposure Monday night were the top-rated sudser "This Is Us," new comedy "I Feel Bad" and the freshman dramas "Manifest" and "New Amsterdam."

All told, iSpot estimates that NBC's promos were responsible for generating 24 precent of the overall impressions during the sponsor breaks.

Among the sponsors who paid their way into the Emmys were Capital One, Audi, Amazon Prime, Samsung Mobile, McDonald's, T-Mobile, Hulu, Apple (iPhone) and Columbia Pictures ("Goosebumps 2: Haunted Halloween," "The Girl in the Spider's Web").

Despite ceding so much of its ad inventory to its own promotional material, NBC still managed to make a killing on the Emmys, booking an estimated $35 million to $40 million in ad sales over the course of the three-hour broadcast. It's likely that the show's elevated unit costs and superior commercial deliveries will continue to make the Big Four networks eager to host the Emmys—Fox has the honor next year—but at some point the indignity of throwing a gala in celebration of all the things that are sucking the life out of broadcast TV may outweigh the allure of a quick infusion of cash.