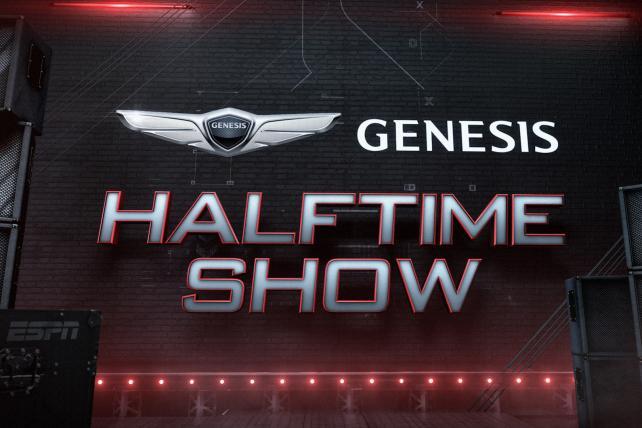 ESPN is starting its thirteenth season of "Monday Night Football" with an all-new halftime concept that it hopes will prove to be music to its viewers' ears—especially those who could use a break from the usual run of mid-game commercial interruptions.

The resulting Genesis Halftime Show aspires to offer "Monday Night Football" fans a scaled-down variation of the annual show biz extravaganza that takes place between the two halves of the Super Bowl. In some cases, the weekly musical performances will take place live and on the home team's turf, while other halftime packages will be built around pre-recorded material captured in local concert halls and other venues.

And ESPN will air zero commercials between the final whistle of the second quarter and the start of play in the third. Genesis will be incorporated into the halftime show through a number of branding elements, including on-screen graphics, desk signage and tune-ins.

Each artist selected to appear in ESPN's new halftime show will have a special connection to the host city, be it of the geographical variety or a bond forged of certain area-specific musical influences. In other words, if a Crescent City native like Dr. John, Lil Wayne or Aaron Neville isn't free to perform during the Oct. 8 Skins-Saints game in New Orleans, it's safe to assume that football fans that night will get an earful of zydeco, bounce or jazz.

The Genesis "Monday Night Football" deal marks the brand's biggest U.S. media investment to date. (According to iSpot.tv estimates, Genesis this year has spent around $5 million on TV inventory, with nearly every penny of that relatively modest outlay targeted to football and golf enthusiasts.) As a new player in the stateside market, having been introduced to these shores just two years ago, Genesis looks to raise its profile in a way that can't be boiled down to simply scarfing up a bunch of 30-second national spots or slapping the brand onto every available media surface.

"What we're looking for is to create awareness for our brand by putting culture at the forefront of our media strategy," says Manfred Fitzgerald, executive VP and global head of Genesis, who adds that sports and music are definitive aspects of the American experience. "I'm not a fan of doing things the traditional way, and when we were presented with this opportunity, we thought we could bring this to life in a way that brought together elements of marketing and music, of art and performance."

Genesis is entering its third season as the official luxury automotive sponsor of the NFL. Parent company Hyundai since 2015 has held the exclusive title to the league's passenger-vehicles category, a catch-all that includes pretty much everything on two axles other than trucks and commercial vehicles—which the company does not produce. Ford is the official truck of the NFL.

"I was really excited by the concept Manfred put forth," says Ed Erhardt, ESPN's president of global sales and marketing. "So we're changing up the format and adding a good deal of upside to the viewer experience with a new commercial-free presentation that includes a unique musical element."

The inaugural Genesis Halftime Show features the a cappella crooners Boyz II Men who, alongside R&B/gospel singer Tori Kelly, were tapped to perform a tribute to the late Aretha Franklin. Fresh off their latest high-profile gig—the three singers belted out the national anthem before Thursday's Falcons-Eagles opener—Boyz II Men here pay homage to the Queen of Soul in her native Detroit.

Outside of halftime, Genesis will be featured in standard in-game commercial spots and custom double-box units.

"This is the marquee position in one of the most storied franchises in sports history," Erhardt says. "Genesis' innovative advertising and sponsorship approach is reflective of their brand and will give them exposure to the vast, passionate fan base of the NFL. We've worked hand in hand with them and with the NFL to bring this to fruition and we can't wait to watch it unfold throughout the season."

While neither party would disclose the terms of the deal, Erhardt says ESPN would be happy to extend the Genesis sponsorship beyond the 2018 season. "Let's just say that Genesis has first option to have the show next year," Erhardt says.

The 49th season of "Monday Night Football" launches with a doubleheader, as the Jets and Lions kick off at 7:10 p.m. EDT before giving way to an all-California showdown between the Los Angeles Rams and Oakland Raiders. The second game is scheduled to get underway at 10:15 p.m. EDT.