In an upside-down world, politics is everyone's favorite spectator sport
READ THIS NEXT
TV giants see glimmers of hope for the ad market 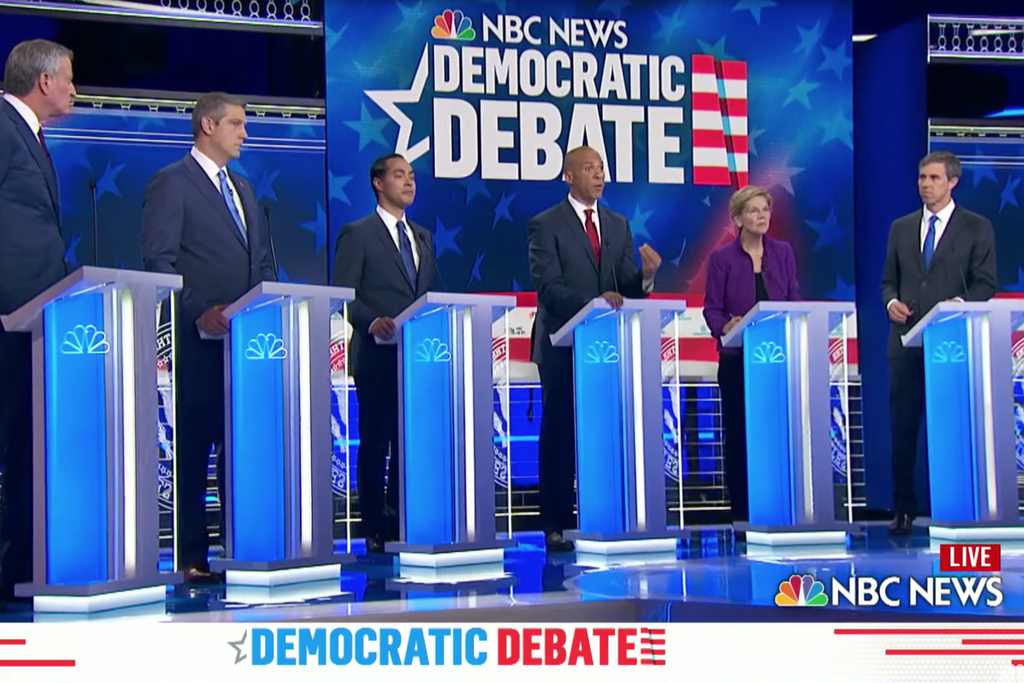 NBC News’ coverage of the first Democratic presidential debate of the 2020 election cycle may have been short on interpersonal drama, but the two-hour event certainly managed to draw a crowd. According to Nielsen live-plus-same-day data, the debate averaged 15.3 million viewers across NBC, MSNBC and Telemundo, coming up a bit shy of the 15.8 million potential voters who tuned in to CNN for the lead-off Dem debate on Oct. 13, 2015.

For the sake of context, this uncharacteristically early meeting of 10 contenders for the nomination to run against President Donald Trump in next year’s general election now ranks as the 28th most-watched TV program of 2019, tucking in between the final round of the Masters on CBS (the live broadcast and encore pulled 15.4 million viewers) and the June 3 episode of the syndicated game show “Jeopardy!” That particular installment, in which James Holzhauer’s near-mythical winning streak finally came to an end, scared up 14.5 million viewers.

Any way you slice it, the turnout for the first debate was mammoth, which perhaps reflects the sweaty urgency that’s been brought to bear in American politics since Trump officially threw his hat in the ring on June 15, 2015. Viewers aren’t anywhere near as interested in the preliminary debates in less frenzied cycles; for example, the first primary debate leading up to the 2008 election eked out just 2.26 million viewers on MSNBC.

More than half (8.67 million) of the debate’s audience watched the proceedings unfold on the NBC broadcast network. Thirty-one percent of the people who tuned in were members of the core news demo (adults 25-54), and the median age of those watching was 60.8 years. The 18-49 crowd accounted for a little more than a quarter (26 percent) of Wednesday night’s audience, while the younger set (adults 18-34) made up just 11 percent of NBC’s overall deliveries.

MSNBC accounted for 5.87 million debate viewers, of whom 1.33 million were in the advertiser-coveted 25-54 age range. Meanwhile, Telemundo’s debate deliveries averaged out to some 719,000 Spanish-speaking viewers. Of these, 326,000 were adults 25-54.

Another 9 million viewers streamed the debate across a host of digital platforms such as NBCNews.com, MSNBC.com, Telemundo.com, NBC News NOW, Facebook, Twitter and YouTube. Those online views were not broken down on a minute-by-minute basis; as such, it’s impossible to compare that tally to the linear TV turnout.

If last night’s cast represented a junior varsity team of sorts—but for Massachusetts Senator Elizabeth Warren, much of the speakers on the dais were B-listers like former Texas Rep., remedial Spanish speaker Beto O’Rourke and wildly unpopular New York Mayor Bill de Blasio—Thursday’s panel will feature two frontrunners in former Veep Joe Biden and Vermont Sen. Bernie Sanders. It’s anyone’s guess how this group of 10 aspirants will fare in the ratings battle versus Wednesday night’s “kids table,” but in all likelihood NBC News shall have worked out the technical bugs that marred an early exchange between moderator Chuck Todd and Sen. Warren.

In his inimitable bellicose fashion, Pres. Trump tweeted that the brief audio glitch was a sign of organizational incompetence. “NBC News and MSNBC should be ashamed of themselves for having such a horrible technical breakdown in the middle of the debate,” Trump thundered. “Truly unprofessional and only worthy of a FAKE NEWS Organization, which they are!”

Some 31 minutes before the POTUS weighed in on the production, he took to the platform to share his deep-seated ennui. (“BORING!”)