Why 'Friends' is still important to content providers 14 years later 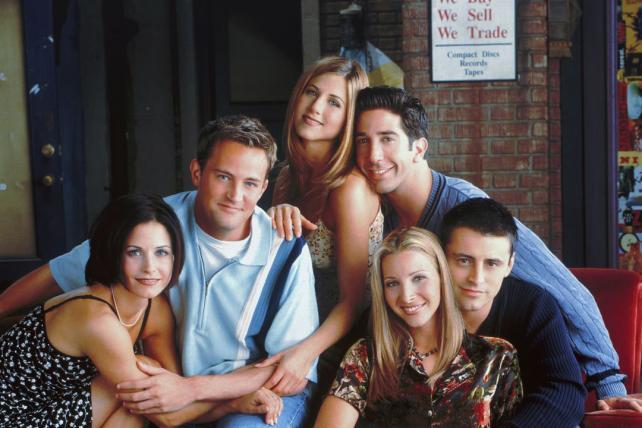 It's been 14 years since "Friends" wrapped with that last tearful group slog to Central Perk, but the old "Must-See-TV" sitcom has roared back into the spotlight this week as a sort of case study on the sometimes uneasy media marriage of content and distribution.

Speaking Tuesday morning to attendees of the UBS Global Media and Communications Conference, AT&T Chairman and CEO Randall Stephenson suggested that "Friends" fanatics would likely be able to get their fix next year when the company's newly-acquired WarnerMedia division is expected to roll out its new streaming platform.

This came after fans of the show all but melted down on Monday when a notice on the show's Netflix page seemed to indicate that "Friends" would no longer be available to stream as of New Year's Day; under a new agreement with Warner Bros., the sitcom will remain in the Netflix library through next year—whereupon it is expected to make the jump to its parent company's new digital offering.

"[Netflix chief] Ted [Sarandos] re-signed 'Friends' on a non-exclusive basis, so that means 'Friends' could go on our platform as well," Stephenson said. "In terms of licensing agreement, that's content we'd definitely want on our platform."

At its peak, "Friends" averaged north of 28 million viewers per episode on NBC, of whom a staggering 17.2 million were members of the adult 18-49 demo. While Netflix does not disclose its audience deliveries, the enduring popularity of the show is apparent in a mere glance at its off-net syndication ratings. According to Nielsen, 2.2 million people last week watched the four "Friends" repeats that ran on Nick at Nite.

While all the fuss over a comedy that first bowed 24 years ago may seem a bit excessive, the "Friends" tug-of-war is emblematic of a rapidly evolving media culture in which the allure of multimillion-dollar licensing deals is perhaps outweighed by the disadvantages of leasing one's most engaging IP to a direct competitor. While Warner booked an estimated $118 million to license "Friends" to Netflix back in 2014, that quick infusion of cash now seems somewhat underwhelming in light of the neck-snapping speed with which younger viewers have ditched the legacy TV model for the more affordable distractions of streaming.

Stephenson acknowledged the inherent knottiness of the licensing game, noting that the content that will be made available to early subscribers to the new WarnerMedia DTC service will be shaped by existing distribution agreements with third-party distributors. "Decisions will have to be made with every single one of these licenses," he said. "Every deal is going to be different, and we want to be very mindful of our existing relationships. There is no one-size-fits-all answer."

At the same time, Stephenson was clear that AT&T has an enormous horde of TV shows and movies at its disposal, thanks to its HBO library and the vast archive of Warner Bros. content that has been developed over the last century. Indeed, given the quality and quantity of HBO's original series alone, the premium cable brand will serve as the heart of the DTC product. Stephenson added that greater investment in HBO will make for a "more fulsome, full year of content" rather than the "very lumpy programming schedule" that subscribers have come to expect from the premium channel.

In another nod to Netflix, Stephenson remarked that AT&T won't have to spend $11 billion per year on content in order to compete in the streaming space. "The goal is not to become another Netflix," Stephenson said, before characterizing the streaming titan as a "warehouse of content." (Earlier this fall, the AT&T boss ruffled some feathers when he made an analogy that positioned Netflix as the Walmart to HBO's Tiffany.)

Stephenson rather briskly jogged through an overview of the company's three tiers of streaming services, which he'd first unveiled during AT&T's Nov. 29 analyst day presentation. As was the case a week ago, details about the pricing of the three packages and what properties would be available on each were scant. He also discussed AT&T's DirecTV unit, acknowledging that the "days of media companies accumulating massive amounts of content and … shoving oversized bundles of content down on the consumers are gone."

Given many consumers' unwillingness to fork over a few hundred dollars every month for bundled offerings that don't serve their interests, DirecTV will have to be ruthless about culling the herd on its programming menu. When the time comes to re-up its carriage deals with the likes of Viacom and Disney, the satellite-TV unit will almost certainly look to shed some dead weight by negotiating to unbundle from any and all underperforming networks.

None of which is to say that the high-end DirecTV customers are going the way of the diplodocus; as Stephenson notes, there remains a "big segment" of consumers who still are happy to pay for a sports-centric, thousand-channel TV menu. That said, DirecTV's most noteworthy premium, its longstanding NFL Sunday Ticket package, may not be long for this world.

"It's become a churn-management product," Stephenson said of the football package, for which AT&T pays the NFL $1.5 billion per year. "The problem with some of these sports rights is … we're limited as to how we can distribute that product. We're limited to our satellite delivery platform, so it kind of has limited usefulness." While DirecTV's Sunday Ticket contract expires at the end of the 2022 NFL season, both parties have the option to terminate the deal as early as next spring. (The annual owners' meeting is set to kick off on March 25, 2019.)

On the legal front, the AT&T chief is optimistic about the company's chances in its upcoming court battle with the U.S. Justice Department. The government is appealing the spring ruling that gave AT&T the green light to complete its long-delayed acquisition of Time Warner. "What the appellate court is looking for is errors in law, and … we believe Judge Leon wrote a very tight order," Stephenson said. "So we think [the ruling] should stand up in appellate review."

Stephenson wrapped his UBS appearance with a discussion about AT&T's plans to accelerate advanced/targeted advertising on CNN, TBS, TNT and the other WarnerMedia networks. Noting that addressable advertising opportunities are currently limited to the two minutes of hourly inventory controlled by the operator, Stephenson said the company is looking into ways to automate the buying and selling of ad time in order to make linear TV more akin to the digital space.

"If you can make the premium video load perform for advertisers the way they do in digital, there's sizable upside," he said. While it will take years to scale programmatic buying, Stephenson is confident that in the near term the Turner sales team "will be able to monetize some inventory without automation."